In the first episode of The Tyranny of King Washington (Of 3 episodes) we see an entirely different Assassins Creed 3 universe. Connor is well…. Never was actually Connor, and is known as Ratonhnhaké:ton like he was in the first few sequences of Assassins Creed 3. He was never apart of the assassins and is now dressed in a pretty cool looking wolfskin suit. George Washington has become in possession of the Apple Of Eden and has become corrupt with power. Washington has been doing awful things to the people like burning down villages, and now it’s up to Ratonhnhaké:ton to save the day by killing Washington, and put an end to his madness. He can’t do it as his current self though. He has to gain different powers (More on that later) Let’s see what’s in store for this DLC adventure.

While playing the DLC there is a noticeable twist to this alternate universe as Ratonhnhaké:ton who isn’t Connor the Assassin still has memories of this other life which is also known to us as Assassins Creed 3. To make things worse no one has any idea about this other life he speaks of. I think we will be hearing more about this in future episodes. At the start of the review I talked about how the player has to keep gaining powers and you might be thinking “How does he do that?” well Ratonhnhaké:ton drinks a special tea which in return allowed him to meet different animal spirits. I liked the idea because it rewarded us with alterations to the gameplay in the DLC. I feel the twist was to freshen things up which I think was necessary.

Ratonhnhaké:ton needs to keep acquiring different powers in each episode to stop Washington’s reign of terror. In this episode he is looking for the powers of the wolf which will give him new wolf related perks. These perks include the ability to call a small army of wolves to Ratonhnhaké:ton’s aid (Very similar to calling Assassins in previous games) he will also gain the wolf cloak. The wolf cloak allows Ratonhnhaké:ton to become invisible for a certain amount of time and will help the player during the stealth missions in the DLC. Gaining these powers did feel different to the Assassins Creed I have been used to. Props though for changing things up with the new DLC.

Although I did say the DLC feels a little different to the usual Assassins Creed games it does still keep many of its old ways. You can expect to be doing similar missions to AC3 in this new DLC as well like eavesdropping for example.The episode overall was decent and I felt it did a good job of building up to the big finale already. The first episode also does well to get the player wanting more as this is how I felt once the episode was over. When it was over I wanted to power up Ratonhnhaké:ton and become the hero who puts a stop to Washington. You get about 2 hours of gameplay in the DLC which is lacking for the price being asked (800 points/$10)

The DLC continues with the animal powers gimmick per episode, and in this episode Connor learns the power of the Eagle. The power of the Eagle gives the player some new perks and moves to Connor’s advantage. The first addition is the ability to fly (Yes, you learn to fly) to pull off the new flying ability you have to aim at certain high parts of the area you are in and press Y/Triangle to fly to that area. With the flying ability you also have the chance to now pull off flying kills at enemies by again holding the Y/Triangle button. I enjoyed the new animal perks and found them a little better than the wolf perks due to having a much more fun pulling these off, and well… Flying is pretty damn cool too! The whole animal powers gimmick, while it sounds pretty ridiculous has been a high point for these DLC episodes.

The new animal power is awesome but sadly that is one of few positives this DLC brings as the story takes place in an extremely dull Boston which kills any enjoyment you could have had with this DLC. Boston lacks any life that it once had in the main Assassins Creed 3 game and also stops any creativity with your newly gained animal power. I wish Boston’s dullness was the only thing dragging this DLC down but then as you go deeper in to the episode you just see more and more bad, for example in one mission you have an A.I with you fighting off enemies, and if he dies the mission gets desynchronized, normally I wouldn’t mind this but not when the A.I is so bad 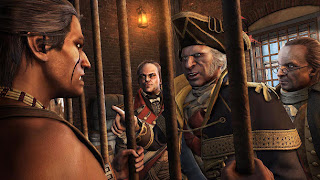 that it is causing you to fail something that isn’t your fault.

Although there was some dull parts to the story, I found it better than the previous episode as it gave us more direction to final episode, and to be honest they have built up this final episode pretty well. I won’t spoil the ending because it is a non spoiler review but I will say that in the end of Episode 2 you should find yourself wanting to play the next episode just to see what twist and turns will be happening, and also how it will all go down. After two disappointing episodes, Episode 3 really needs to blow us away, and make people think that this whole side story wasn’t just a big waste of time.

The final episode of the DLC starts off with Ratonhnhaké:ton on his way to New York, and during this brings back the popular naval missions. We also get the final animal power in this episode which is the bear. The bear power gives Ratonhnhaké:ton even more new perks to add to his other perks that was gained during the first two episodes. The bear powers in my opinion were the weakest of the three animal power but are still pretty fun to use. The new perk spawns a huge glowing bear to attack around a certain area but it has a major down side, it can also attack allies that can ruin missions for you. I thought the animal powers were the best part of this DLC, they were fun to use and gave us a new side to Assassin’s Creed that we had never seen before.

New York follows the theme of the whole DLC series by changing things up. The most noticeable difference you will see in New York is King Washington’s huge pyramid that is being built right in the middle of New York (Sadly it cannot be climbed) To me New York also felt like the most open area out of the 3 episodes, the feeling of been restricted in the past DLC’s was a major downside to the episodes.

This is a non spoiler review so I can’t go into detail about the story, but I found the ending to be just “decent” it was always going to have a lot to live up to when you break DLC into episodes and build it up so much, and while it was still satisfying in some places it could have been much better just like the DLC overall.

The DLC just didn’t work for me overall, the first major problem is the DLC coming out in episodes because it kills all of the momentum the DLC has. It would have been great if this was released as one big 6-7 hour expansion pack like the GTA/Elder Scrolls DLC, imagine if those great DLC’s came out in episodes? It would have had a much less impact than it did being released as a full DLC. The other problem with the DLC is that it’s way over priced for how many hours you are getting.

I did like however the additions of animal powers and a change of direction compared to past Assassin’s Creed games but in certain parts in the episodes the story falls flat, and ends up becoming a drag. Assassins Creed 4 DLC should be one big DLC this time around and hopefully the problems with this DLC is fixed in the next games DLC because if they are then it could be an amazing expansion.