While it may be a subjective statement, there’s no denying that Nathan Drake has had a fairly long run as the ‘face’ of the PlayStation brand, especially since Uncharted 2: Among Thieves in 2009. Out of PlayStation’s long history of console defining games, Uncharted has been particuarly special and with rumours that Uncharted 4 will be the conclusion to the Nathan Drake story, it might be time to speculate who will fill the gap that this conclusion brings. Although there’s a good chance this isn’t the end of the Uncharted franchise, it’s unmistakably being set up as the end of Nathan Drake’s story so we can assume we may not see a new entry in the Uncharted franchise for a while.

The release date of April 26th for Uncharted 4: A Thief’s End is fast approaching and hype and excitement for the game is currently palpable with many gamers eagerly waiting for the next entry in the Uncharted series. Naughty Dog revealed that the series’s PlayStation 4 debut will find protagonist Nathan Drake searching for a lost pirate treasure.

“Several years after his last adventure, retired fortune hunter Nathan Drake is forced back into the world of thieves,” reads a synopsis for the game. “With the stakes much more personal, Drake embarks on a globe-trotting journey in pursuit of a historical conspiracy behind a fabled pirate treasure. “His greatest adventure will test his physical limits, his resolve, and ultimately what he’s willing to sacrifice to save the ones he loves.”

It begs the question whether the gap that Uncharted 4 leaves in the PlayStation family will be filled by a pre-existing IP of Sony’s or an entirely new game altogether. Without further ado, here are the candidates I think could fill the gap:

God of War is an action-adventure video game series loosely based on Greek mythology. Debuting in 2005, the series has become a flagship title for the PlayStation brand. God of War has a longer history with the PlayStation brand compared to the Uncharted series. God of War has seen 6 games across multiple PlayStation devices and, while falling slightly short of Uncharted’s average sales, is still quite a big-seller for the PlayStation brand. The main trilogy is the three bestselling games in the franchise with an estimated combined sales of 11.95 million. This is in comparison the the three main games in the Uncharted series which have managed to sell 21 million + copies since their release. The epic conclusion of God of War 3 left Kratos in poor physical shape, but, with his demons both real and metaphoric well and truly slain, it was a fitting end to his journey. It’s practically confirmed that God of War 4 is in the works at Sony’s Santa Monica studio, but apart from that details are scarce. There’s room for a spinoff or they can always flip the reboot switch and give us a whole new story and protagonist. With Uncharted’s future being uncertain after the conclusion of Nathan Drake’s story, this could be the perfect time for God of War to return to the fray and really take it’s place as the ‘face’ of the PlayStation brand.

Well, this one was a no-brainer really for this article. Horizon: Zero Dawn completely stole the show at E3 2015 with the announcement of the new IP from Guerrilla Games’ PS4 exclusive. The official PlayStation blog describes Horizon: Zero Dawn as such:

Horizon Zero Dawn is set in a lush, beautiful open world where nature has reclaimed the ruins of a forgotten civilisation. It is a world where mankind is not the dominant species, and highly advanced machines sit at the top of the food chain. You play as Aloy, a young outcast from a tribal society, who has learned to hunt the machines. Intent on unravelling the many mysteries that surround her, Aloy embarks on a quest that will lead her to discover her own destiny.

Along the way, Aloy will face off against an entire menagerie of machines – some travelling in herds, others roaming in solitude, all of them presenting a formidable danger. You will need to learn their behaviours, attack patterns and weak points in order to survive. You must use the beautiful environments to your advantage, and employ stealth, agility, and cunning to approach your prey unseen. 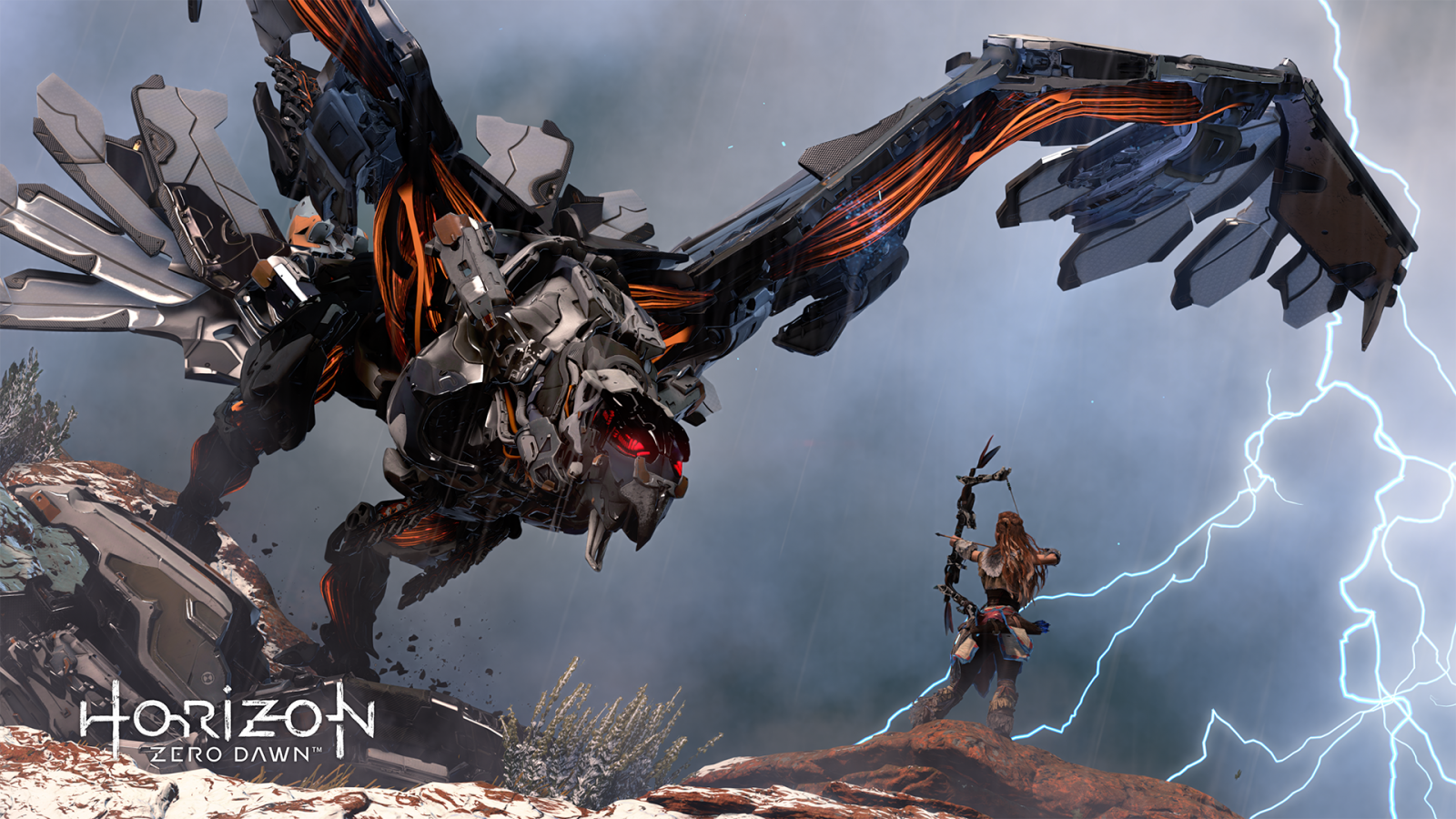 Aloy taking on a creature known as a ‘Stormbringer’ 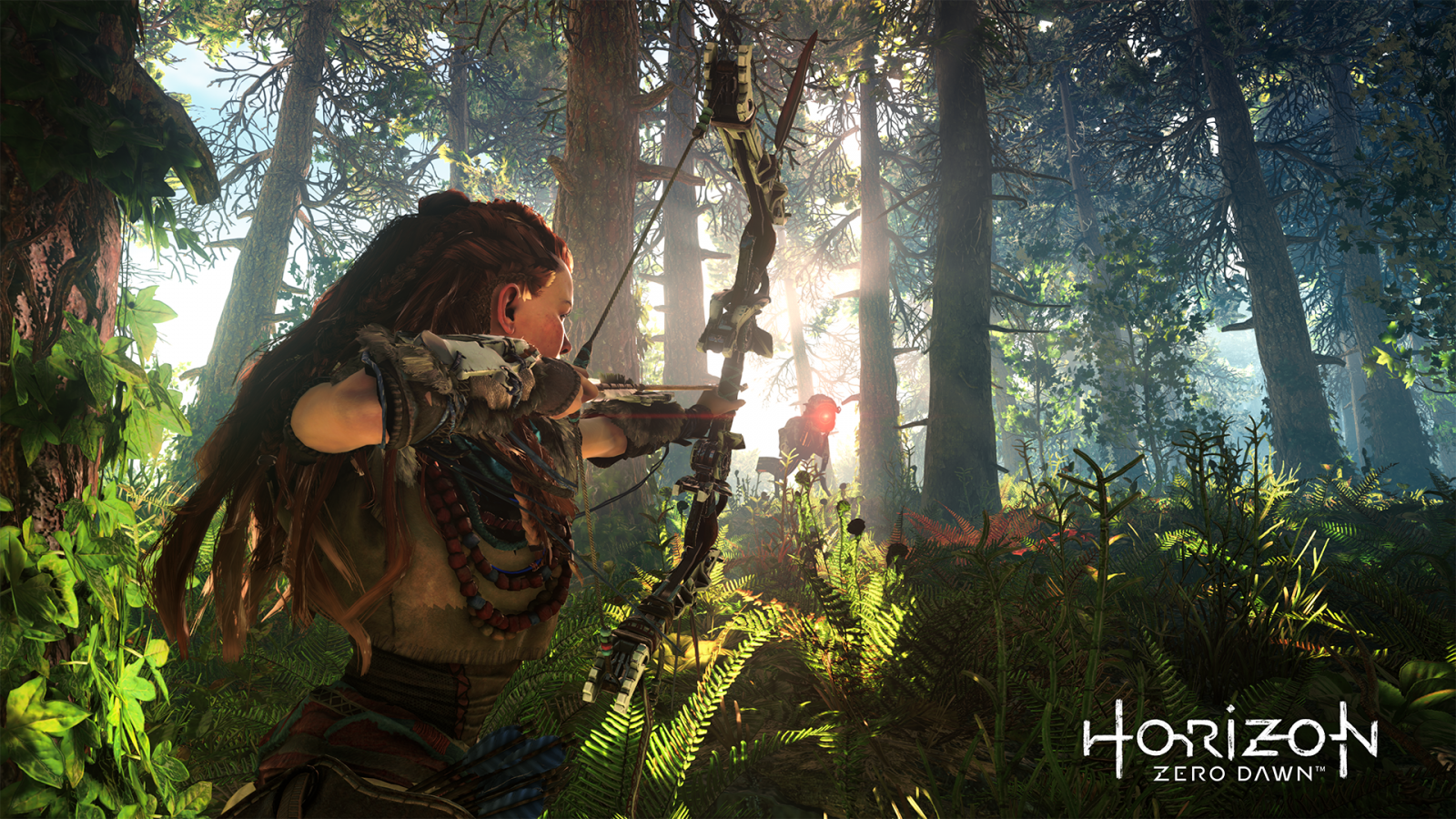 Aloy hunting in the woods of Horizon’s lush open world

It’s clear why this game made waves at E3 2015. A fresh, unique concept of an apocalyptic world now ruled by a hybrid of machine/dinosaur creatures, absolutely gorgeous visuals and a Skyrim-like type of open world all sounds just so appealing that it’s no surprise the game won so many game of the show awards. Think about your time in Skyrim or The Witcher 3 or a Fallout game and you’ll quickly remember that it isn’t just the storyline that resonates with you the most; it’s the world and the direction that we create for ourselves. With all the hype and excitement surrounding Horzion: Zero Dawn, we see no reason why it won’t be a big hit for Sony and could spawn multiple sequels. Here’s to hoping Horizon all the success it looks like it deserves.

The Last of Us

Despite the fact that Naughty Dog’s The Last of Us came out right towards the end of the lifecycle for the PS3, it’s brilliance still secured its place as one of the best games to drop in the last generation altogether. Set in the post-apocalyptic United States, the game tells the story of survivors Joel and Ellie as they work together to survive their westward journey across what remains of the country to find a possible cure for the modern fungal plague that has nearly decimated the entire human race. We know that sales for The Last of Us had passed 7 million on the PS3 alone and since the PS4 remastered version has also been out now, it’s fair to say that it probably sold big numbers too. This puts The Last of Us toe to toe with the Uncharted series in terms of sales.

During his Q&A panel at MetroCon, Nolan North stole the headlines by confirming the existence of The Last of Us 2. A fan inquired if North was collaborating with Naughty Dog on any upcoming projects following Uncharted 4, and he responded by confirming that Uncharted 4, for the time being, would be his last time working with Naughty Dog. However, North further went on to develop his statement by saying, “I know they’re doing a Last of Us 2.”

At this point, it’s safe to assume that The Last of Us 2 is being worked on over at Naughty Dog and considering the fact that developers have broached the topic, we may hear more about the sequel to Naughty Dog’s popular survival horror title very soon once Uncharted 4 is out of the way. Fans of the original desperately await more details on The Last of Us 2 and since the first game was such a huge success for Sony both commerically and critically, it’s very possible The Last of Us 2 could fill the gap that Uncharted 4 leaves behind. 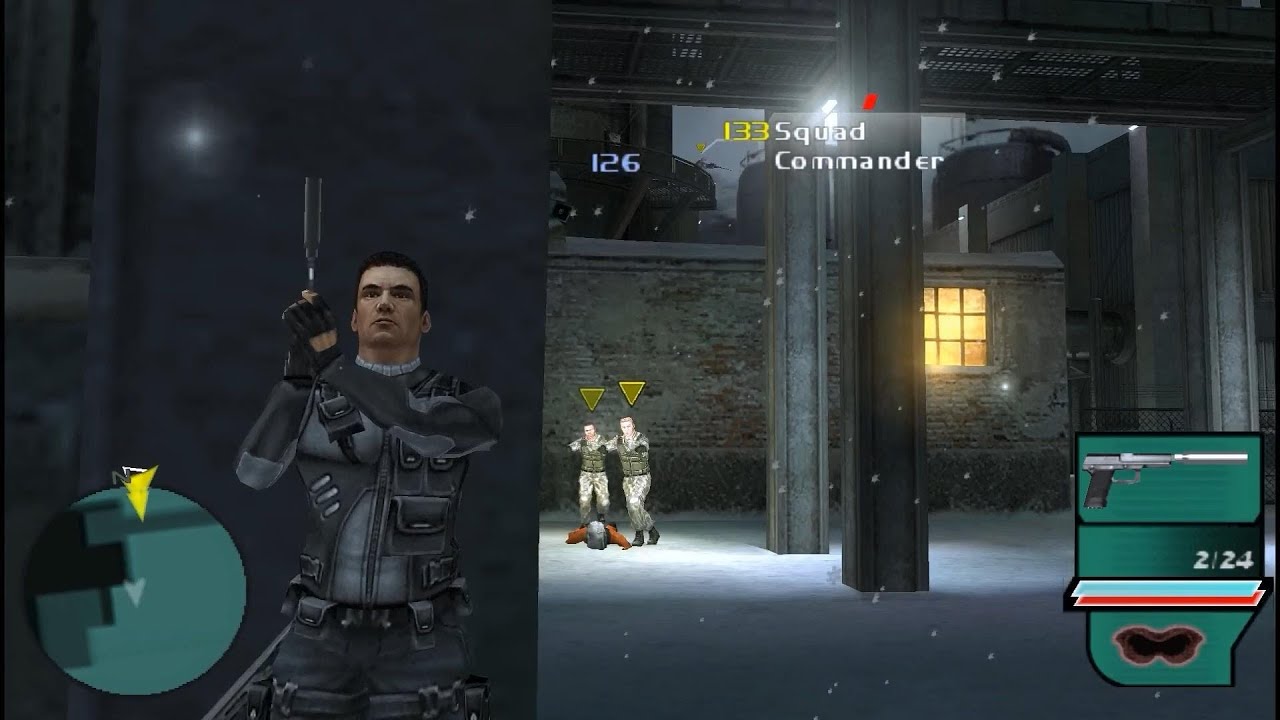 Sony’s PlayStation brand has a full vault of memorable PlayStation franchises – Crash Bandicoot, Spyro the Dragon, Legend of Dragoon, Syphon Filter, PaRappa the Rapper etc. While we do know some of these may not get anything new anyitme soon PS4, it’d be a good move for Sony to tap into PlayStaion’s nostalgia and revive Syphon Filter.

Although info surrounding any possible new entry in the franchise has been dormant for years now, PlayStation fans worldwide share fond memories of Sony Bend’s Syphon Filter games and are hungry for a new one. Syphon Filter is a third-person shooter stealth video game series. that has appeared on the PlayStation, PlayStation 2 and PlayStation Portable game systems. In the series, Syphon Filter is the name given to the mysterious biological weapon.

It’s the right time for this this 3rd-person shooter with an espionage hook gets a return to prominence and we hope Sony is working on it. They’ve shown their willingness to bring back old franchises with deals with games like Shenmue 3 and FF7 so we hope Sony taps into their own wide array of franchises and gives fans a new Syphon Filter game. Given how its themes could be even more popular in today’s terms, this would be a smart move to make for the PlayStation brand.

One of the oldest PlayStation franchises is Crash Bandicoot. Crash remains in the hearts of many gamers who enjoyed the original games and a revival would be HUGE, like literally, it could break the internet. During the PlayStation Experience 2015 keynote conference, Sony Computer Entertainment’s Shawn Layden took the stage in some rather strange attire. Instead of donning his usual sharp suit, Layden decided to wear a PlayStation-branded t-shirt with the iconic Crash Bandicoot on the front. This had my heart skipping a beat for the Crash revival announcement but alas the time passed and it’s feared Layden may have been trolling us.

It’s a move originally done by head of Xbox Phil Spencer who is known for wearing a Battletoads t-shirt at a few events which also has many fans hungry for a revival of that game. When Layden copied the move, we’re hoping it’s for the same reason: a hint at a new Crash game coming at some point in the near future. After thinking it over, I’ve come to the conclusion that if Sony and other IP holders want to give Crash a revival, then they simply can’t wait too much longer.

Speaking to Game Informer, an Activision PR rep said that: “Activision owns Crash Bandicoot and we continue to explore ways in which we could bring the beloved series back to life.” The episode has helped to raise the character’s profile, and alert Activision to the level of goodwill the franchise retains. It’s unclear whether Acitivision will revive the game themselves and release it on multiple platforms or if they’ll partner with Sony to revive it exclusively on the PS4. Since Activision and Sony seem to have a generous working relationship this gen with games like Destiny and Call of Duty: Black Ops 3, maybe an exclusivity deal isn’t out of the question. We’d love to see Crash return and the monumental move could help Sony find a franchise to fill the gap that Uncharted will leave behind after Uncharted 4.

There you have it, some of the franchises we feel might be able to fill the gap that Uncharted leaves behind after the release of the conclusion to Nathan Drake’s story in Uncharted 4. Do you agree with my picks or do you have your own? Let us know your thoughts and opinions by leaving a comment below.

Tags: Post Uncharted 4 Launch, PS4 Next Big Franchise, uncharted 4, What Takes Over Uncharted As The Face Of Playstation