Since it’s initial reveal all the way back in 2013, Quantum Break remained one of the most hotly anticipated Xbox One games for the entirety of its lifecycle thus far. The intriguing concept behind Remedy’s Quantum Break had piqued my interest from the very beginning; blending two mediums of entertainment together to create a unique narrative experience. Considering the criticism Microsoft and the Xbox team faced in 2013 for their reveal being too heavily focused on TV, this resulted in some incredulity surrounding Quantum Break by very association. However, Remedy’s name alone kept the hype alive for their newest blockbuster title and here’s 5 reasons why Quantum Break not only lives up to the hype but exceeds it. Quantum Break’s TV episodes are so good that I found myself gripped by them even more than what I thought I would have been. Whenever you hear names like Shawn Ashmore, Dominic Monaghan, Aidan Gillen and Lance Reddick you can be assured that what you’re getting is going to be of a sufficient amount of quality. They really didn’t hold back with these TV episodes either. Sam Lake Lake said they shot enough footage for around 40 variations on how the show can pan out. The show doesn’t just take place in one confined area, either. There is a variety of indoor and outdoor sets, fight scenes, car chases, shootouts and well-done special effects for the time manipulation powers.

In particular, there is one extended scene in the first TV episode with Liam Burke fighting his way through the Monarch building after being suspected of betraying the shady corporation. For me, seeing Burke disarm and efficiently knock out multiple foes reminded me of Jason Bourne fight scenes that also often featured intense close-quarters combat. This was a testament to the quality of these TV episodes that they were so quickly able to engross me further into the narrative story of Quantum Break. Further, surely no one can deny how cool it is that the TV episodes give us a different perspective and gives us insight into the lives and work of the ‘bad guys’ in Quantum Break. Kudos to Remedy on pulling off this risky move of including TV episodes.

Powers aren’t anything new in games but there’s something to be said for how satisfying Remedy’s Quantum Break make these time manipulation feel when pulling off. The core of the game is what could be said to be generic 3rd person shooter mechanics but the time manipulation powers add a whole new layer of sweet satisfaction to the combat in the game. Jack can freeze enemies within a time globe and shoot them down while they’re frozen inside it. Jack can also pull off swift dashes, and even pull off a powerful “Time Blast.” The best thing about Quantum Break’s time manipulation powers is the genuine sense of empowerement that you get when pulling off wicked combos. You’ll quickly find that there’s tougher enemies beyond the ‘grunts’ that you face off against in the early sections of the game and mastering these time manipulation powers will be integral to your badassery as Jack Joyce.

If you’re looking for any tips for Quantum Break then here’s an easy one to maximise the experience; have surround sound set-up or play with surround sound headphones on. Every special move within Jack Joyce’s arsenal has its own musical bite that “disperses” the layers of already played music. Moreover, all those time manipulations affect the sound on a macro scale, like the general ambience of a location we’re currently in and the overall scene as well as each of the individual enemies, separately. The sophisticated sound design is amplified by all those time manipulation powers even more. The sound design is so well done and used to pull players even further into an already immersive and well-written and well-acted story. 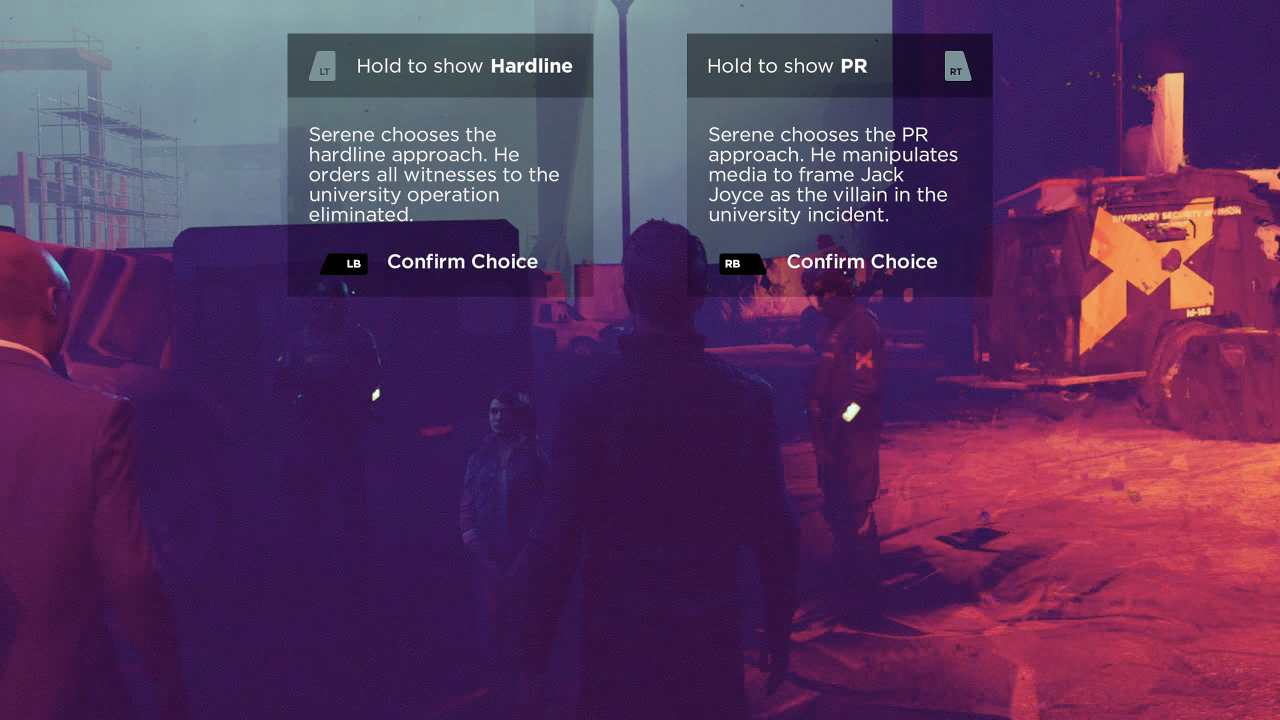 While playing through Quantum Break, you’ll come across points in the story known as “Junctions” at the end of each of the 4 acts. These Junctions give players the chance to make a choice as Paul Serene that will alter the landscape of the story going forward. For instance, you can decide if some characters live or die, new plot twists will emerge, and different scenes will appear in the live action TV episodes between the acts. The premise behind this unqiue feature is that Serene has seen the future and has seen both outcomes but you’re tasked with choosing the ripples your actions will send through time.

The first “Junction” appears at the end of Act 1 after the situation at the University. Paul Serene’s adviser, Martin Hatch, presents him with two options, both of which have serious consequences for all involved and River Port as a whole. In this Junction, you can choose the Hardline approach, which will see all witnesses and loose ends to be executed, at the cost of public favourability. Alternatively, you can choose to launch a widescale PR campaign and turn public pressure against Jack Joyce, at the expense of leaving any witnesses or loose ends alive whereby they may aid Joyce at a later point in the game. The brilliance behind these Junction points is that they leave you with meaningful, substantial decisions that will literally change how you experience the game. Many games that feature some degree of ‘choice’ often only provide the illusion of it but Remedy have done a good job here at making the choice meaningful enough to make the player seriously deliberate which one they will choose. One thing that cannot be denied is that Quantum Break is a beautiful game. The game is powered by Remedy’s in-house Northlight engine and you’ll be hard pressed to find a better looking game on console. The facial capture work done here is unprecedented to me, accurately recreating each one of the game’s star-studded cast with life-like accuracy. Fine nitpicking might reveal a few issues here and there but these are greatly overshadowed by the beauty of the overall presentation of Quantum Break.

The game came under fire shortly before launch because of a rumoured 720p resolution, something proven wrong by Remedy but something that still finds its way into arguments formed by a certain crowd of fanboys. While very technical, the short version is that Quantum Break employs a solution whereby its 1080p output is a temporal reconstruction from four previous 720p 4xMSAA frames, a technique found in games like Killzone Shadow Fall and Rainbow Six: Siege. Technical details aside, when in motion the game really is a treat to behold. the art direction Remedy has taken with Quantum Break is definitely beautiful. The game has has an authentic ‘filmic’ look, one that nicely accompanies the look and feel of the live-action TV episodes that run alongside the game.

That’s just 5 reasons why I believe Quantum Break not only lives up to the hype but exceeds it. Do you agree with my view? Let me know what you think by leaving a comment below.

0 0
Previous ArticleCan We Expect Telltale To Announce The Wolf Among Us Season 2 This Year?Next ArticleStreet Fighter: Resurrection Episode 4 “Countdown” Review