While many Xbox One Gold members are no doubt enjoying the likes of The Wolf Among Us, Dead Space, Sunset Overdrive and Saints Row IV this month, it’s human nature to keep looking forward and even though April 2016 is probably the best month in the program’s history, it’s exciting to speculate what Microsoft might bring to GWG in May 2016. The GWG program had a rocky start in the early Xbox One days but in recent months the service has offered some great games; Tomb Raider Definitive Edition, Assassin’s Creed Black Flag, Sunset Overdrive, The Wolf Among Us, Borderlands, Dead Space, Lords of the Fallen, Killer Instinct S1 Ultra Edition, and more. The GWG service is on a roll recently and here’s the games we think might be offered to keep that momentum going.

Dead Rising 3 is a 2013 open world survival horror beat ’em up video game. It is developed by Capcom Vancouver and published by Microsoft. The game was released as a launch title for the Xbox One platform on November 22, 2013; a Microsoft Windows port published by Capcom was released on September 5, 2014. It was announced as an Xbox One exclusive launch title during Microsoft’s E3 2013 press conference on June 10, 2013. Dead Rising 3 was in my opinion the best launch game for the Xbox One. While I appreciated the visual beauty of Ryse, it was Dead Rising 3 that I had the most fun with and I was desperate to show my friends. With literally hundreds of unique zombies on the screen at a time and a wide range of crazy customized weapons/vehicles, it was a very fun game indeed. This could be a game offered with GWG next month since it is a launch title and Microsoft may want to keep the momentum going with a AAA title. With rumours that we may get a Dead Rising 4 announcement at E3, it’d be perfect timing too.

Alan Wake is an action-adventure psychological horror third-person shooter video game developed by Remedy Entertainment and published by Microsoft Studios. The story follows best-selling thriller novelist Alan Wake, as he tries to uncover the mystery behind his wife’s disappearance during a vacation in the small fictional town of Bright Falls, Washington, all while experiencing events from the plot in his latest novel, which he cannot remember writing, coming to life.Since the release of Alan Wake back in 2010, the game has become somewhat a cult classic amongst gamers and its narrative style of gameplay meshed with action has secured the game a place in gaming history. Remedy’s latest game Quantum Break had a pretty attractive pre-order incentive recently whereby players received Alan Wake + all DLC and  Alan Wake American Nightmare for free when pre-ordering Quantum Break. That means there really isn’t  a better time to release Alan Wake via GWG than May 2016 since they’ve just gave it away for free with Quantum Break this month and giving it to all Gold members next month could even entice people into buying Quantum Break also.

Titanfall is crafted by one of the co-creators of Call of Duty and other key developers behind the Call of Duty franchise, Titanfall, with its advanced combat techniques, gives you the freedom to fight your way as both elite assault Pilot and fast, heavily armored Titan. The experience combines fast-paced multiplayer action with the dramatically charged moments of a cinematic universe. The game launched on the Xbox One back in March of 2014 and with its use of Azure servers and fun gameplay quickly made quite the splash. The game’s DLC is already all free and it’s in the EA Vault so it’s not hard to imagine it coming to GWG and it’ll probably be a fairly cheap deal for Microsoft. With the sequel announced recently with a teaser trailer announcing the sequel for Xbox One, PS4, and PC. The first gameplay reveal will come on June 12th 2016. No release date has been given yet, but expect an announcement on June 12th. To drive up more hype for the sequel, it makes sense to release Titanfall to the masses of Gold members to enjoy.

When federal agents threaten his family, former outlaw John Marston is sent across the American frontier to help bring the rule of law. Experience intense gun battles, dramatic train robberies, bounty hunting and duels during a time of violent change. Red Dead Redemption is an epic battle for survival in a beautiful open world as John Marston struggles to bury his blood-stained past, one man at a time. Red Dead Redemption: Undead Nightmare, the all-new terrifying single player story that also includes a ton of new action-packed multiplayer content is now available in stores on disc for Xbox 360.

Red Dead Redemption 2 has been swamped in rumours and leak and the latest news to come from the game is a supposed leaked image of the game’s map. 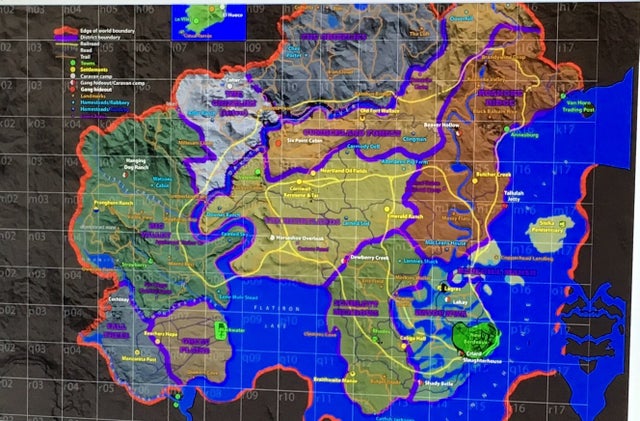 The image made the rounds on NeoGaf before being validated by TechRadar. The source also told Techradar that Red Dead Redemption 2 would be a prequel and the map will be set just to the east. With an announcement sure to come at E3 and Rockstar known to release games very soon after they announce them, it would be perfect timing to see Red Dead come to the GWG service.

What games are you hoping to see come to GWG in May? Let us know what you think or share any predictions you may have by dropping a comment below.

Games With Gold For May 2016 Is Mediocre After The Great Direction It Was Taking In April
April 28, 2016