Overwatch is one of those games that I initally told myself I wouldn’t take too seriously due to the cutesy graphics and told myself I can just play it casually and not worry too much about winning or losing. Well, having spent a chunk of time in the open beta I have now come to the realisation that i was completely wrong. Overwatch is chaotic and frantic and at its heart very competitive. I’ve had practice in team-based shooters so I learnt the inner workings of each character and the role they fit rather quickly but for those that aren’t as familiar with team-based games, here’s a rundown for how to best play the Defense role.

What is the Defense role?

Defense is one of the four roles in Overwatch and the main objective of the defense role is to guard locations, create choke points, and establish a front. They may have long range weapons or the ability to create turrets, and excel at area denial. 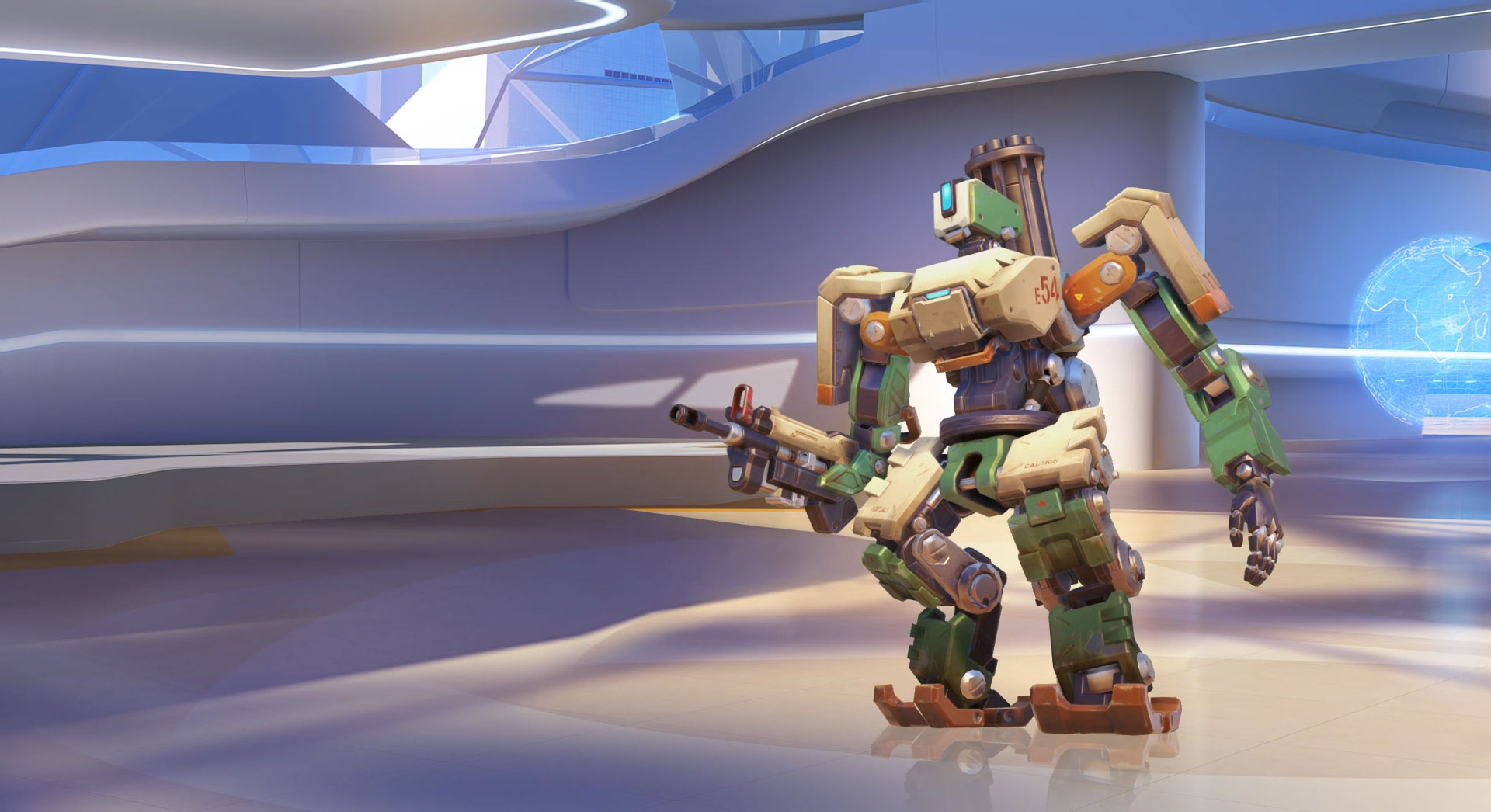 Configuration: Recon: Bastion’s default state, in Recon mode, Bastion is fully mobile, outfitted with a submachine gun that fires a steady burst of bullets at medium range.
Configuration: Sentry: Bastion’s turret mode, which creates a front-facing shield that protects it from damage whilst in Sentry mode, Bastion is a stationary powerhouse equipped with a gatling gun capable of unleashing a hail of bullets.
Reconfigure: Allows Bastion to swap between its two configurations at will.
Self-repair: Allows Bastion to heal 25% of HP per second at the cost of being unable to move or attack for the duration of the ability.
[Ultimate] Configuration: Tank: Bastion becomes a mobile tank for a brief period, in Tank mode, Bastion extends wheeled treads and a powerful long-range cannon. The cannon’s explosive shells demolish targets in a wide blast radius

Bastion’s sentry is too powerful and too useful in a defensive role to be ignored. If you set-up in the correct position, you can rack up a high killstreak just mowing down a choke point as enemies desperately try to evade your turret fire. Self-Repair is an incredibly useful tool to keep you in the fight for longer and frees up the support character to go heal other members of your team.

Frag Launcher: Shoots frag grenades which bounce to reach their destination, and blow up when they strike an enemy.
Concussion Mine: Place a mine that can be triggered at will to damage enemies and send them flying… or launch himself through the air.
Steel Trap: Place a trap to ensnare enemies injuring and immobilizing them.
Total Mayhem: Upon death, he drops several live grenades that detonate for massive damage in a small area around him.
[Ultimate] Rip-Tire: Junkrat spawns a controllable wheel that he can remotely detonate the RIP-Tire to deal serious damage to enemies caught within the blast

Since frag grenades can bounce off walls, you can use the Frag Launcher to arc grenades into well-defended points or choke holds. This style of defense is very effective; especially against other Defense role heroes such as Torbjorn and Bastion who rely heavily on turrets which can’t arc the same way that Junkrat’s frag launcher can thus making him a very useful hero to combat turrets. Further, his traps are good to detect any of the sneakier characters such as Reaper who can flank and decimate an enemy team if undetected. 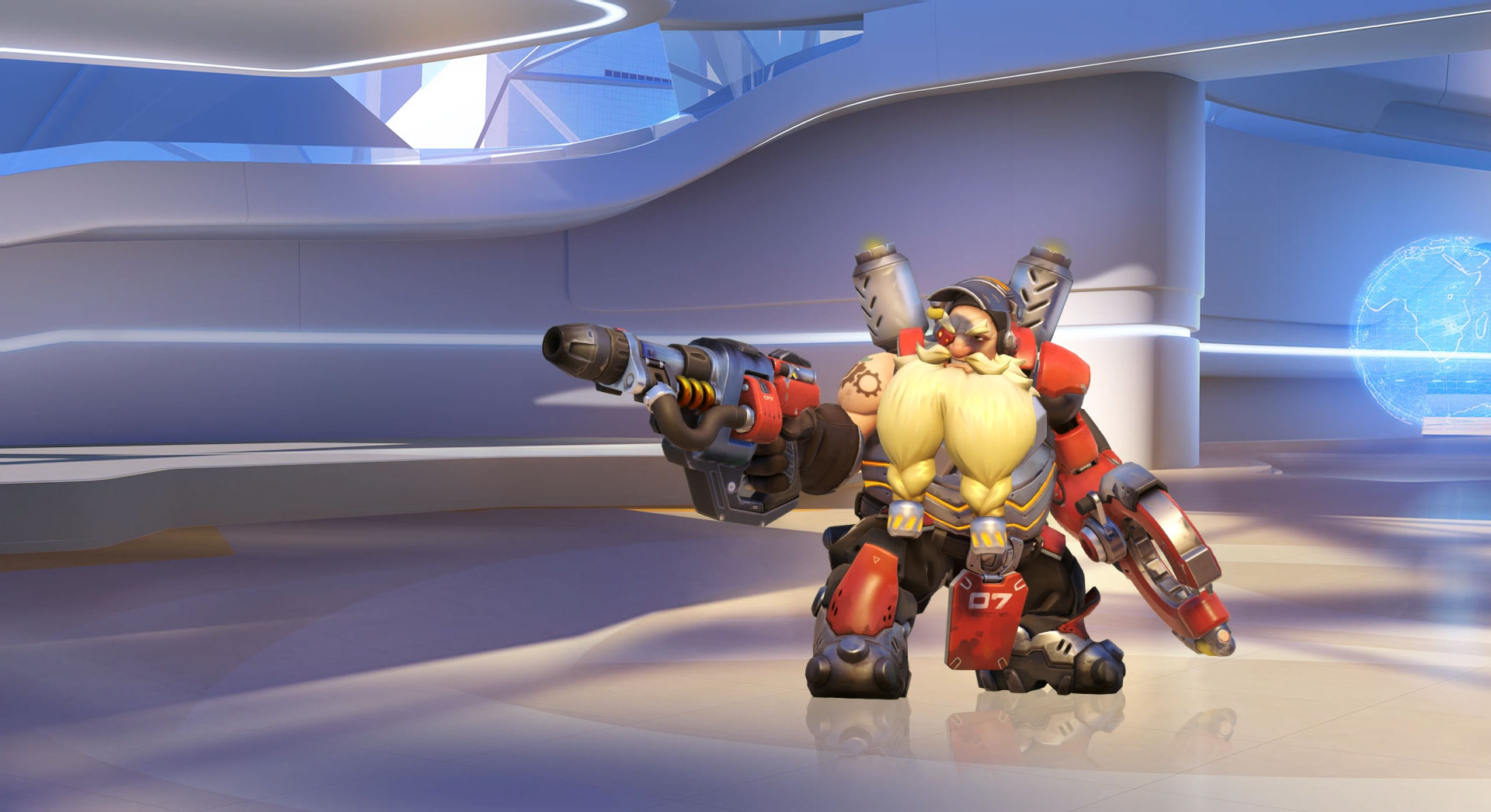 Rivet Gun: Torbjörn fires rivets at long range, or ejects molten metal from his gun in a short, close-range burst.
Forge Hammer: Using this on Torbjörn’s turret upgrades and repairs it with the stored scrap Torbjörn currently has on him. In a pinch, it can also be swung as a weapon.
Build Turret: Torbjörn constructs an enemy-tracking autocannon. He can use the scrap he collects from dead enemies and allies to repair it. Upgrading it increases its health and ammunition, adding a second cannon barrel and a rocket launcher.
Armor Pack: Consume stored scrap to drop an armor pickup for allies or Torbjörn himself.
[Passive] Scrap Collector: Torbjörn collects scrap dropped by fallen enemies.
[Ultimate] Molten Core: After overheating his personal forge, Torbjörn gains a significant amount of armor. His attack, build, and repair speeds are also significantly increased for the duration.

As long as you build your turret near doorways that open out to large, contestable areas or choke holds then you’ll find that you’ll not only be holding the enemy back but also gaining a lot of kills and assists in the mean time. With maps that have platforms on a rotating belt around the map, turrets can be placed on these to protect multiple corners of an area as it rotates around. Don’t forget to give armor to allies. It might not be the biggest boost in defense, but every little bit helps and this could save a team member or yourself in a sticky situation. If you’re attacking in an escort mission then his turret on the payload to add extra defense and help you and your team to victory. 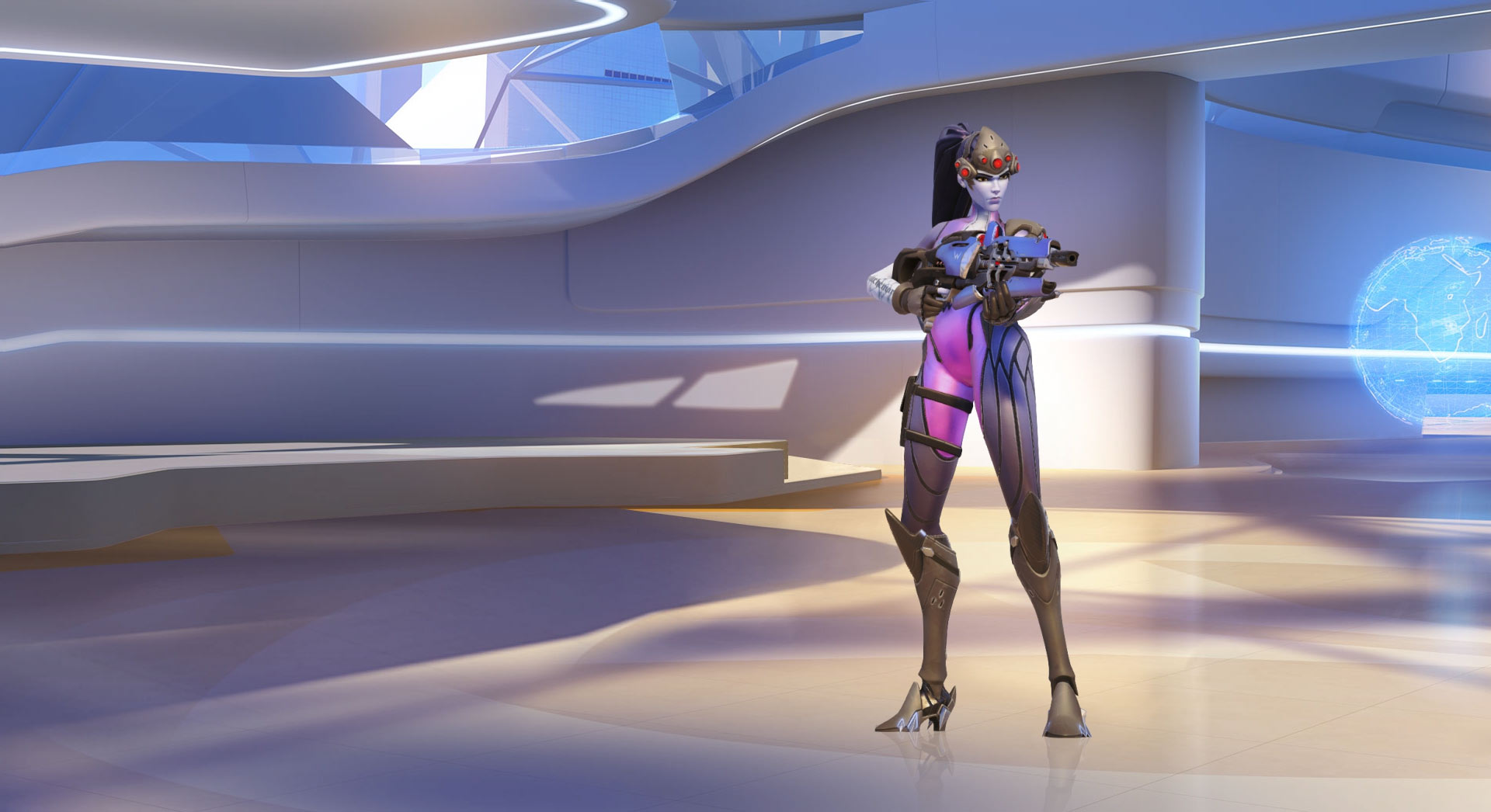 Widow’s Kiss: Widowmaker’s versatile sniper rifle is ideal for scope-aimed shots at distant targets. Should targets close to medium range, the rifle can also be fired in fully-automatic or single-shot mode. Sniper shots cost 3 rounds.
Grappling Hook: Launch a hook at a surface, pulling Widowmaker towards it, allowing her to expand her view of the battlefield and evade or flank targets.
Venom Mine: Plants a proximity mine that detonates when enemies get too close delivering poison gas to any enemies in the vicinity, causing them to take damage over time whilst also alerting Widowmaker to the detonation.
[Ultimate] Infra-sight: Highlights the position of all enemies on the map through walls to both Widowmaker and her entire team for a few seconds.

Playing with Widowmaker means you will want to aim to maintain her ultimate Infra-sight for as long as possible. Being able to see enemies wherever they are is a huge advantage for your team and is very neat for anticipating where attacks are coming from in a defensive position. The synergy between her grappling hook and sniper rifle is also perfect for defending from a distance; your team members might not see you but they’ll be damn grateful that you were there to decimate an enemy for them. Venom mines are also very useful to weaken enemies but also to alert enemy presence. 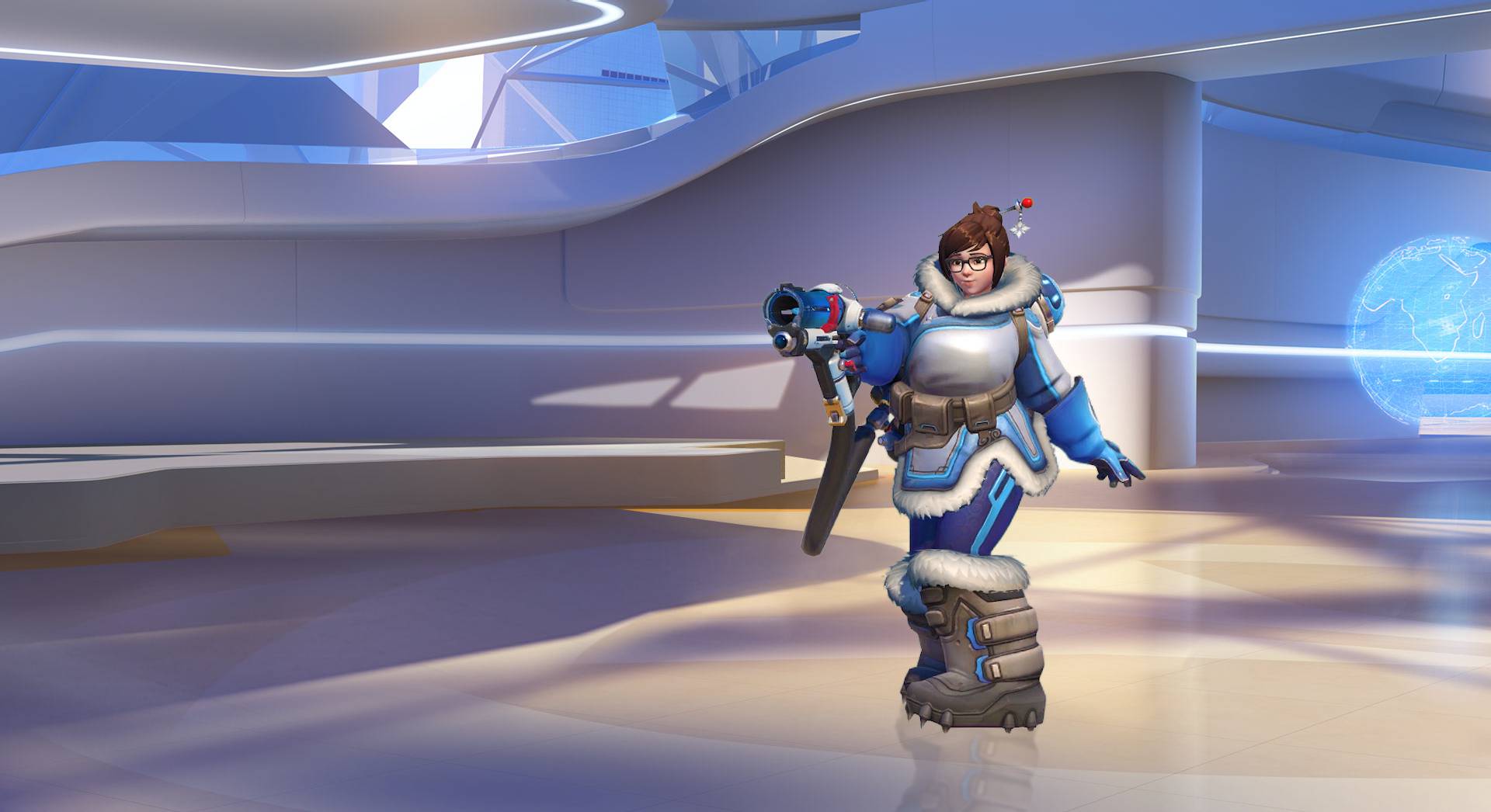 Endothermic Blaster: Fire a continuous stream of ice towards an enemy which damages, slows, and ultimately freezes enemies in place. Mei can also use her blaster to shoot icicle-like projectiles at medium range. Projectiles cost 25 rounds of ammunition per shot.
Cryo-Freeze: Encase yourself in ice which heals and ignores damage while encased, but cannot move or use abilities.
Icewall: Raise an ice wall from the ground, that obstructs lines of sight, stops movement, and blocks attacks.
[Ultimate] Blizzard: Mei deploys a weather-modification drone that emits gusts of wind and snow in a wide area. Enemies caught in the blizzard are slowed and take damage; those who linger too long are frozen solid.

Out of all the Defense characters in Overwatch I’d have to say that Mei is the most fun; her abilities and play style just really makes for some entertaining moments and can be a big problem for any enemies. Her Icewall ability is frankly fantastic with blocking off attackers at chokepoints, the wall can also be used to cut off enemies attempting to flee your fury. You can also use the Icewall to gain access to elevated positions by casting it at your feet, causing you to be raised into the air and granting access to areas that would otherwise be out of reach. If you’ve played Smite, Mei is basically a cute version of Ymir. 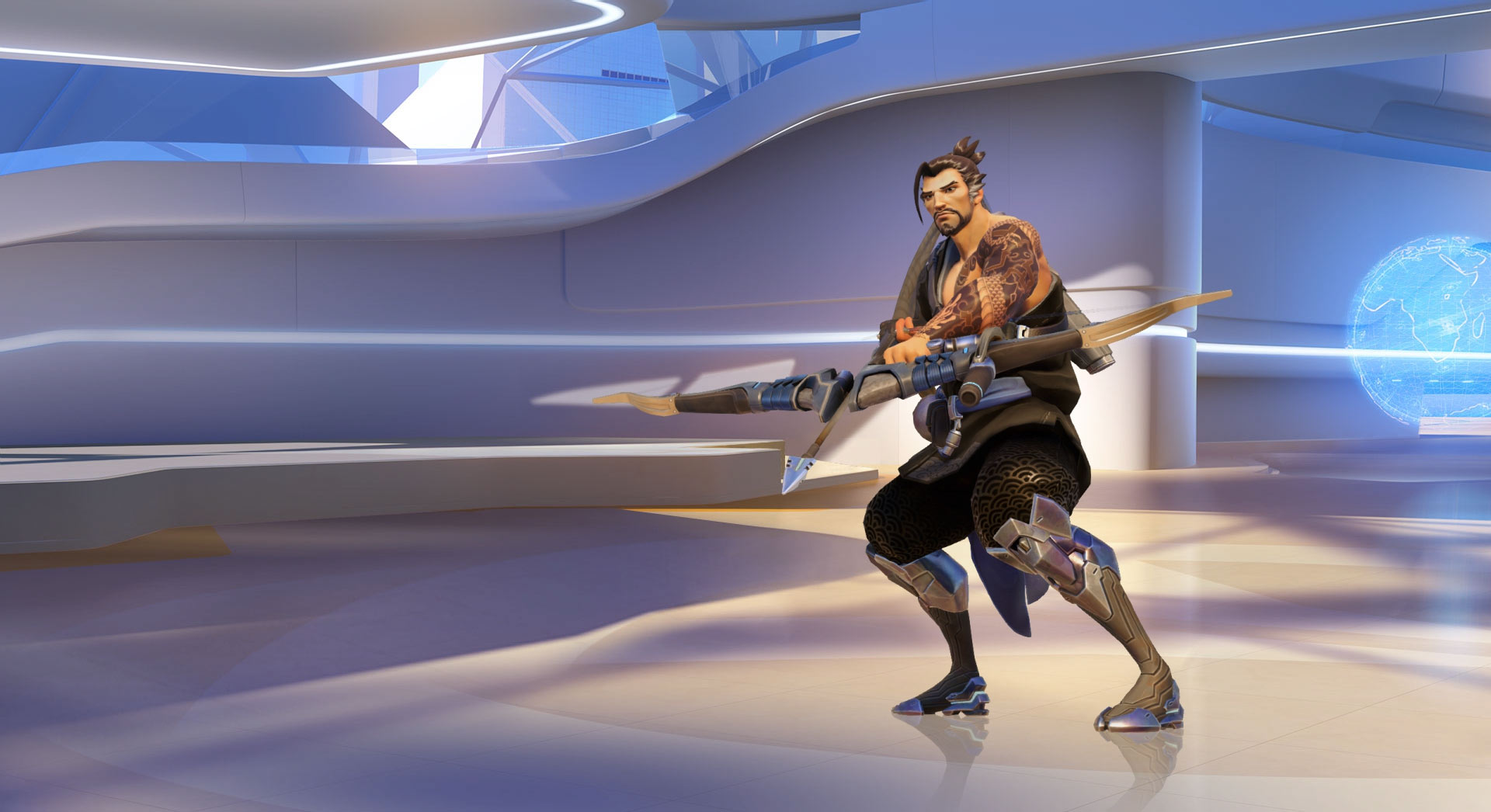 Storm Bow: Hanzo nocks and fires an arrow at his target.
Sonic Arrow: Hanzo launches an arrow that contains a sonar tracking device. Any enemy within its detection radius is visibly marked, making them easier for Hanzo and his allies to hunt down.
Scatter Arrow: Hanzo shoots a fragmenting arrow that ricochets off walls and objects and can strike multiple targets at once.
Wall Climb: Hanzo can climb any vertical surface.
[Ultimate] Dragonstrike: Hanzo summons a Spirit Dragon which travels through the air in a line. It passes through walls in its way, devouring any enemies it encounters.

Hanzo can literally one-shot enemies from a distance if pulled off correctly. His constant barrage of arrows is very effective in helping your team hold down a choke point. It’s worth noting that his ability Scatter shot can bounce off shields too. Therefore, if an enemy Bastion or Reinhardt is bunkered down with no weak point in sight, try getting some height and arcing a Scatter Shot to land inside their defensive shell and they won’t stand a chance.

That’s the rundown on the Defense role guide for Overwatch. No matter which character you prefer in this role or if you’re new to Overwatch, I hope that you found this guide helpful and keep an eye out on guides coming soon for the other 3 roles within Overwatch.

0 0
Previous ArticleWhy Far Harbor Could Be The Biggest Piece of DLC in 2016Next ArticleThe Witcher 3: Blood and Wine Expansion Release Date Leaked?