Games With Gold and PlayStation Plus free games per month are little incentives they push with their subscription based services to access the online platforms, sometimes one company may outshines the other while the competitor doesn’t really put too much effort into their choices. Now, before I go further, let me tell you that I’m a PlayStation Plus user and have been for about 6 or so months now, prior to that I was a PC gamer and before that, an Xbox 360 & PS3 user so I’ve had my fair share of all the major platforms – this may seem like a biased article, but this is only my opinion.

To put it into perspective as to what I’m arguing, the June line up of Games With Gold is as follows:

Goat Simulator is a pretty funny, semi-open world sandbox game, where you play as a goat, causing mayhem and chaos wherever you trod – if you’ve played the likes of Postal then you’re kind of on the same boat here, it’s just a little less weird… kind of.

The game is pretty goofy, and keeps you entertained, coming back for more with it’s DLC releases such as Goat of Thrones and PAYDAY to name but a few.

One of my favourite open world racing games from the brilliant minds at Ubisoft and although it had mixed reviews upon its initial release, it was praised with for the overall size of the game and the vehicle progression system.

Since it’s somewhat failed release it has come a long way with updates to fix the graphical issues and any other problems noted by players. This is something you could compare to the likes of Need For Speed, a great driving game with a brilliant plot.

Another funny game, following up from a flash game from 8 years ago, becoming a shorthand for the hardcore 2D platformer resurgence. The game requires a weird level of skill to tackle the jumps and stupidly punishing levels. Especially if you want to pick up all the uh-.. plasters?

A game that was recently added to the ever growing list of backwards compatible games, Firaxis’ rebooted the classic turn-based strategy franchise with an experience that engages you like never before.

You and your team are tasked with repelling the alien invasion, putting you in the shoes of the squad commander who leads the scientific, engineering and financial side of the missions as well.

The opposing lineup that PlayStation are offering to their Plus subscribers, recently released are:

Undoubtedly one of the greatest NBA releases with incredible new features and a brilliant new motion engine, having much smarter, hyper-realistic movements with new ball & rim physics in addition to player collisions.

Being one of the most critically acclaimed sports titles ever, it offers great features like MyCareer, MyGM, MyTeam and MyLeague, bringing you even further into the game than before. Definitely a great choice from the team at PlayStation.

One of the most interesting exploration and adventure games from previous years, giving users a very intimate and unique story – albeit, it is quite short and can be completed within a day but it definitely isn’t something to bat an eyelid at, and I urge you to play this if you can.

This is a very fiendish puzzle game, where you guide a mannequin through many odd 3D mazes and instead of turning the mannequin, you change the actual maze – giving the user different viewpoints and dead ends into pathways to your goal.

It’s a very perspective altering game, focusing on optical illusions. Progression in the game means increasingly difficult mazes, where using your experience in the former will definitely be helpful.

This is a brilliantly manufactured, episodic game, featuring 12 episodes in four chapters. Taking place in the mountains of Japan, a village with a troubled past called Hanuda has whispers of strange rituals occurring – some of human sacrifice and the call of a ghostly siren, spelling danger for the living.

You take control of multiple characters during this incredibly graphic and terrifying story of survival against the darkest evil when an American television crew arrive to investigate the surroundings to form a report on what they see.

God of War: Chains of Olympus

You are Kratos, the Ghost of Sparta – as a great shadow covers the land and trapping Helios, god of the sun, you are tasked with restoring the light and escaping the sins of your past.

From the Gates of Hades to the depths of Tartarus, explore ancient realms, solve cryptic puzzles, unleash brutal new attacks and slay nightmarish beasts such as the Minotaur, Cyclops and Basilisk.

Chased across the galaxy by an angry gang of robots, the Little Deviants – a mischievous race of alien creatures – have crash-landed on the Whoman world. And now they’re in big trouble! Help them to rebuild their spaceship before evil robots and undead zombies can hunt them down. 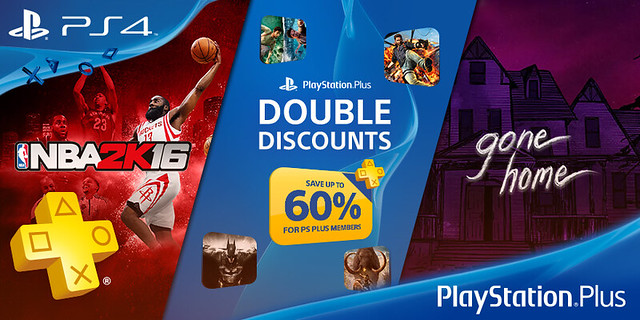 Now, personally I’m more of a story-based game fan and while both games boast a very wide variety of games to choose from I’m more partial towards the Xbox side purely because of XCOM and The Crew. I love driving games and with the addition of a story to one, it just ups the ante for me. Not only this, but I’m a fan of the XCOM series and have been since I first played UFO Defence.

Meanwhile NBA 2K16 is visually beautiful and I’ve never seen a sporting game with such amazing artwork or a career mode that makes you feel like you’re actually a member of a huge sporting team, but I’ve never really been a fan of basketball and even before the game was announced for the PS Plus June line-up I had tried it and just couldn’t get into it. The controls were too complicated for myself, and the rules regarding the game meant nothing. Amongst the list we also have Gone Home which I’ve only watched playthroughs of previously, but it did look incredibly interesting and the visual aspects were breathtaking but it doesn’t really show too much replayability with the likes of The Crew or XCOM – nevertheless I’ll definitely be downloading it to have a look at it for myself, rather than screaming at my monitor that they’ve missed something so blindingly obvious to open the lock.

And while it’s hard to compare a game with puzzles like echochrome to the likes of Goat Simulator, I don’t really see the point behind the sandbox game. It (Goat Simulator) was fun for the first few hours, but then it began to just seem silly and repetitive, not to mention kind of boring. But then they produced DLC which, fair play to them, boosted the game in my eyes and the developers behind the game really do make it fun – it’s just not something I like myself, but I wouldn’t turn it down for a free game. echochrome though is still something you could easily get bored of. Regardless, the series of platforms and puzzles are unique, and the way the game is presented alongside the movement of the environment as opposed to the character isn’t something we see too often – it’s all about perception.

Siren Blood Curse is incredible to say the least, and it’s damn long – with a whole 12 episodes. I like games that aim to spook you out a lot, and playing this on the PS3 certainly shook some bones in my body. Despite the hoops you need to jump through prior to playing, Blood Curse more than makes up for it with some of the most intense and perfectly paced survival horror I’ve had the pleasure of being terrified by – it’s also not something a lot of players would’ve heard of prior to the release of the PS+ June list.

When writing this I had a pretty firm idea on which I’d had more of a preference over and it was Games With Gold – however both companies definitely pulled it out of the bag this year after more consideration, and it’s hard to give a definite opinion on which one is the favourable in my opinion. PlayStation did well with some games with the likes of Siren Blood Curse, God of War and NBA 2K16 but on the other hand, XCOM and The Crew are two brilliant games that all players would love – taking into consideration that Sony offers more games than Microsoft too. I definitely want to get my old consoles out to try out the games being offered by both sides but in this case, I think that PlayStation have just about scraped the top spot this month with their games however Microsoft were very close.

But we’d like to hear from you, what are your opinions on the matter? Did you prefer Microsoft over PlayStation? Perhaps you think they’re both on par and it’s a draw this month? Let us know down below in the comments!

0 0
Previous ArticlePlayStation Plus June 2016 Free Games AnnouncedNext ArticleIf There’s No New PS4 At E3, Microsoft Would Be Smart To Show Their New Xbox One At E3