October 11 is the date that PS4 owners can finally get their hands on Rise of the Tomb Raider. The game released on Xbox systems exclusively last year and then on PC earlier this year. Now, we finally know the PS4 version’s official release date. The question some are asking now is whether the game is worth the $60. The game’s been out for a long time on Xbox One, Xbox 360 & PC and many felt that Square Enix had shunned the PS4 user base when they decided to make an exclusivity deal with Microsoft.

Rise of the Tomb Raider released exclusively on Xbox One and Xbox 360 in November of 2015. It’s still unclear to a degree the exact details of the deal but it was essentially a one year period of exclusivity. However, there is suggestions that Microsoft played a direct part in the development process and even handled the costly publishing costs for the Xbox versions of the game. However, immediately after the announcement, it sparked outrage from the user base of the PS4 console.

PS4 has had a lead in sales over the Xbox One through this generation and so many felt upset that the game wouldn’t make it to their console of choice if they decided to pick up the PS4 over the Xbox One. Further, considering the historical links of Tomb Raider on older PlayStation systems many felt that Square Enix where shutting the door on the system that had helped the franchise in the early days of Tomb Raider with PS1 and PS2 versions of the franchise.

In my opinion, much of the outrage was unwarranted. Both companies have been doing this practice as long as one can remember e.g. Sony’s deal with Street Fighter V but Rise of the Tomb Raider is perhaps one of the biggest games yet to feature a timed exclusive deal on one platform. Beyond the hyperbolic calling for people to be fired, talk of boycotting the franchise was also prevalent in the aftermath of the announcement. However, we now know the full package that will be arriving on PS4 so let’s assess whether or not this makes it worth $60 for PS4 owners.

The PS4 version isn’t getting any exclusive content apart from the PSVR side mode but it is receiving all previously released DLC. ‘Rise of the Tomb Raider: 20 Year Celebration’, includes the original game plus a new story chapter set in Croft Manor titled ‘Blood Ties’ that’s playable in PSVR; a major new expansion to the game’s co-op Endurance Mode; a new ‘Extreme Survivor’ difficulty mode; new outfits, weapons and Expedition Cards; and all previously released DLC, including Baba Yaga and Cold Darkness Awakened.

The base game can currently be picked up on Xbox One for very cheap (in fact, I recently bought it for £8) and the season pass costs £19.99 or your local equivalent. Technically, you can buy Rise of the Tomb Raider on Xbox One plus the season pass to get access to all released and new 20 Year Celebration DLC for far less than the $60.

What’s even better is that Co-op is a free upgrade to everyone who has purchased Endurance as a standalone DLC, or received it as part of the Season pass. In fact, if you already own the Season Pass, you’ll receive all of the new 20 Year Celebration content on Xbox One and PC for free. 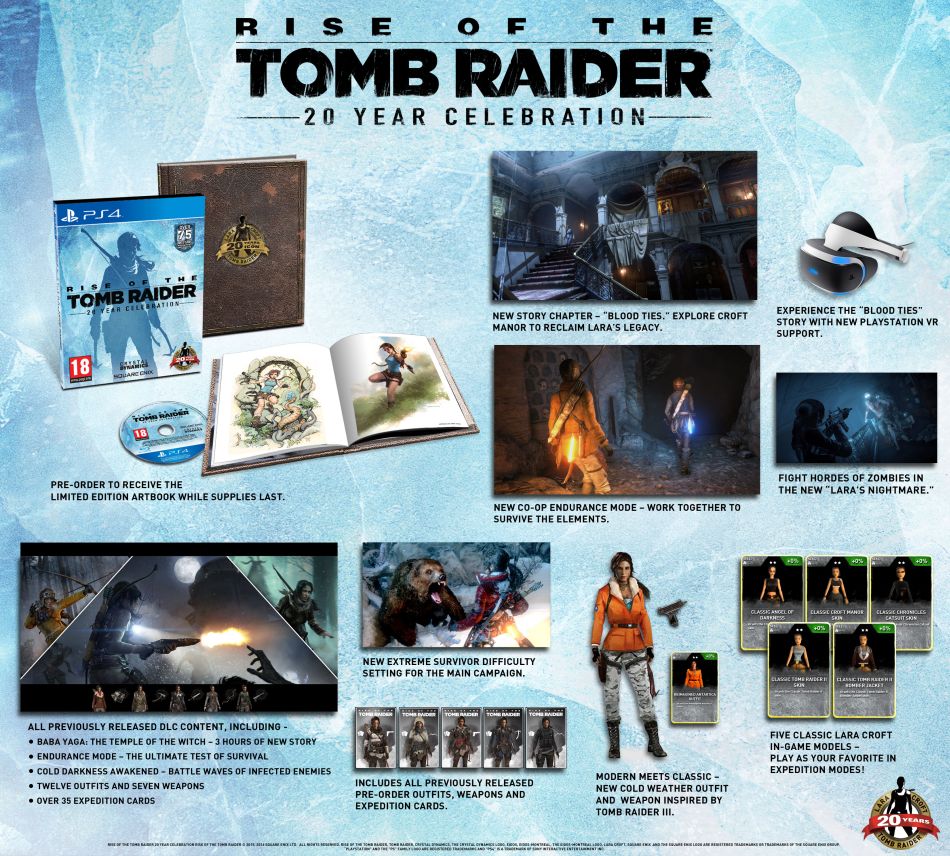 As you can see, that’s quite a lot of content for $60 and as one of the highest rated games of 2015, it’s well worth the chance to experience but what appears to be seen is whether the PS4 owners who vowed to boycott the game will uphold that promise. PS4 owners have already enjoyed an adventure game this year that’s often compared to Tomb Raider in the form of Uncharted 4 – a GOTY contender for 2016 – so PS4 owners need to ask themselves if there’s enough content in this package to convince them. In my opinion, I think there’s plenty of content here to warrant a $60 purchase.

It’s sure been a long wait and the deal might still be disliked by PS4 owners but it’s perhaps not wise to take it out on the game. After all, this was a business decision undertaken by Microsoft and Square Enix and the game itself is a very good product. This is the chance to further support the franchise and ensure that the third game is released on all platforms simultaneously.