Watch Dogs 2 arrives the next month, and Ubisoft make a trailer premiere during this week, a new trailer that gives us a good look at what to expect in the The Zodiac Murderer mission. The access to the mission would be only available to those who pre-order the game.

“In 1969, the Zodiac murderer terrorized San Francisco. Despite all indications, only one thing is known: It was never caught, “We forward the video.Apparently now the murderer has left the shadows and is looking to start a new game where the protagonist anger following the clues and deciphering riddles.

The trailer ends showing the suit bonus also obtained when pre-ordered the game. Pretty simple, but with an orange shirt that says: “I saw the Zodiac Murderer”.

Writer at ThisGenGaming
My name is thomas, im from Argentina, i am 20 years old, lover of the games, makes games, not war!
Topicsps4TrailerUbisoftwatch dogs 2xbox one 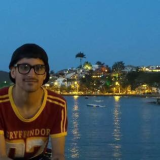 My name is thomas, im from Argentina, i am 20 years old, lover of the games, makes games, not war!
More Posts (17)