Take this one with a grain of salt, everybody. A streamer known as Etika revealed a Nintendo Switch controller during a rather energetic stream along with a Nintendo Joycon controller, going as far as to snap the joysticks into place like in the reveal commercial all while laughing about how Nintendo was going to sue him. You can see the video of him showing off the controller and gamepad below, though you should be aware that the audio is very NSFW.

While that video does look very convincing, we live in a world where people can 3D print pretty much anything they desire from the comfort of their own home as long as they either have the skill to model their own creations, or the money to pay someone who knows how. It is impossible to tell if the controllers Etika is holding in the videos are truly legitimate or not, but a since deleted twitter post might shine some more light on the subject.

Sure, it still looks pretty convincing from that image as well, but a few keen eyed Neogaf users have pointed out that the lettering on the face buttons is slightly thicker than they appeared in the original commercial for the Nintendo Switch. While that doesn’t necessarily rule out the possibility that the controller is real or at least a prop version used in the commercials, it certainly casts doubt. There’s also the fact that none of the videos or pictures show the streamer actually turning the controller on. We will likely find out in the next few days though as Nintendo probably wouldn’t be too happy to hear about one of their products ending up in someone’s hands outside of a closed environment, even if that product is just a dummy prop they used for a commercial.

I'm like Ryan Gosling in that movie Drive, but instead of doing all that cool stuff I just write a lot. I do wear the scorpion jacket all the time though.
Topicsleaknintendonintendo switchstreamSwitchTwitch 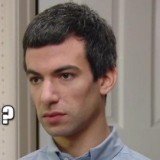 I'm like Ryan Gosling in that movie Drive, but instead of doing all that cool stuff I just write a lot. I do wear the scorpion jacket all the time though.
More Posts (4) The World Ends with You: Final Remix launches on Nintendo Switch October 12 in the US and Europe