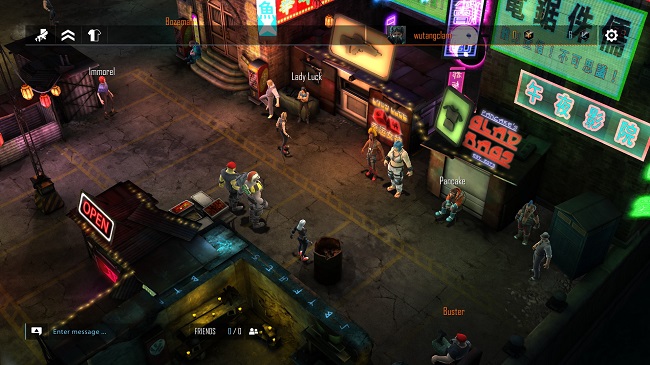 With a resurgence of old school RPGs from the 90s well underway today, Jordan Weisman’s legendary Shadowrun series has been getting a bevy of new entries thanks to the phenomenon of Kickstarter, with Shadowrun Returns and Dragonfall having been released within a year of one another to critical acclaim. With a third game, Shadowrun Hong Kong, on the way, fans of the intriguing cyberpunk series are currently whetting their appetites on another Kickstarted entry, Shadowrun Chronicles: Boston Lockdown, which was released last month.

Unlike other Shadowrun games, Boston Lockdown has the unique distinction of taking the series’s classic turn-based isometric gameplay online, allowing players to go on runs with their friends or strangers encountered online, rather than taking on the responsibility of managing an entire squad by themselves. As it turns out, this is the only reason to play Shadowrun Chronicles: Boston Lockdown, and for the most part it’s a very good reason.

From the very start, Chronicles provides players with a large variety of ways to customize their avatars. Helmets, facewear, gloves, shoes, pants, undershirts, underwear and jackets can all be customized to one’s liking, and there’s plenty of options overall to craft a character that appeals to your tastes reasonably well; certainly far more than Returns and Dragonfall.

Past that, you’ll find yourself in the game’s sole hub area, which, rather tragically, is woefully small. This is where you’ll find NPCs to talk to and receive quests from, vendors to buy things from, and other players to socialize with and team up with to embark on runs. Interacting with NPCs is minimal; there are no dialogue choices whatsoever and conversations serve little other purpose than to receive quest-related information or expand on the game’s lore a little bit. I do appreciate that there is voice acting for most characters, unlike the conspicuously mute Returns and Dragonfall, and while some of the Bostonian accents of certain characters sound awful, the voice acting in Chronicles is for the most part quite well done and compelling enough that I didn’t find myself skipping through conversations often.

Although a hub area with other players running around, often clipping into you during conversations with NPCs, may invoke feelings that Chronicles is an MMOG, it is not. There is a 15 hour or so story campaign, along with a number of optional sidequests, all of which can be accomplished via solo or cooperative play. Going on runs requires that you select from a pool of fellow shadowrunners of varying skills, just like the other Shadowrun games.

Although you can go about the entire game by yourself, with a team of other shadowrunners you control alongside your main character, you’d be depriving yourself of the sole reason Shadowrun Chronicles exists: to experience this legendary cyberpunk universe with other human beings. Playing this turn-based RPG with other players is a lot of fun; from the get go, it’s great to see how other players have crafted their own characters and compare them to your own. The game’s slow, methodical pace means that team work and communication are especially paramount, and thankfully the Shadowrun Chronicles community is filled with helpful and polite players who are willing to join your team of shadowrunners to help you overcome that one pain-in-the-ass mission. In my own playthrough, I was invited to help one player on a troublesome run. There was another more experienced player on the team, and throughout the mission he was offering both of us helpful hints on playing our respective classes to the best of their abilities, as well as helping coordinate tactics to ensure that neither of us accidentally wandered into a slaughter.

Despite being a turn-based game, cooperative play in Chronicles allows for players to make their moves anytime they want. Instead of sitting there waiting for each player to complete their turn, turns are accomplished on a first-come-first-serve basis, so whoever on the team decides to make their move first, does so. This is a subtle but very helpful touch that keeps things flowing smoothly. Additionally, being able to concentrate on just your character instead of the entire team gives Chronicles a very different feeling compared to solo play; you feel like one leg of a table and your every move carries more weight as a result. It’s an extremely gratifying feeling when you and a squad of human players overcome tactical conundrums not through quick reflexes or sublime hand-eye coordination, as is always the case in real-time games, but through sound teamwork and a willingness to help one another.

Of course, none of this would be fun, cooperative play or not, if Chronicles didn’t have good gameplay, and for the most part it does. Battles are highly reminiscent of 2012’s XCOM: Enemy Unknown, with a very simple cover-based system that shields anyone hiding behind obstacles and opens up friend and foe alike to loads of damage if they are flanked or without cover. Unlike XCOM, however, Chronicles’ probabilities feel more fair; if you are in close range to an enemy and are flanking him, you are pretty much guaranteed to do tremendous damage.

Enemy AI is also reasonably clever, with enemies taking cover at all times and repositioning themselves if you try and flank them. Gunfire, spell and decking sound effects are punchy and rewarding, with the exception of shotguns, which sound hilariously impotent compared to pistols and assault rifles. With these factors in mind, combat in Chronicles feels fast and brutal, the latter of which is made especially so by limited hit points compared to the other Shadowrun games.

Perhaps Chronicles’ biggest problem is, to paraphrase Gamespot’s Kevin Van Ord’s review of The Sims 4, that Shadowrun Returns and Dragonfall exist. The game adopts almost identical RPG systems from those two titles, but dramatically strips them back in favor of emphasizing its more combat oriented flavor. For example, decking is nowhere as involved as it was in Returns or Dragonfall, reducing deckers to tech-oriented mages who can mark enemies or stun them, but are utterly helpless against tech-less enemies like wolves. Mages are in a similar boat, having nowhere near the variety of abilities they had in Returns and Dragonfall. This problem is all the more exacerbated by the fact that many of the missions in Chronicles’ campaign throw waves of melee enemies at you, and after numerous retries I found that the key to winning these particular scenarios was to throw diversity out the window and deploy a team composed entirely of gunmen.

Additionally, the overwatch feature, which allowed runners to sacrifice their turns to set up ambushes for approaching enemies, is conspicuously missing. This is a conscious decision by the developers to give melee characters more of a chance, but it is nonetheless a devastating loss. In countless instances I found myself frustrated when melee characters like wolves and club-wielding trolls appeared from outside the fog of war, running all the way up to my squad members’ faces in a single turn without any way for me to either predict their approach or deploy defensive measures in advance (in this case, overwatch).

Features like the ones described above were mainstays in Shadowrun Returns and Dragonfall and were instrumental in giving those games depth and their unique flavor. A new player coming to Chronicles without playing those games won’t notice, but considering that most people who do play it are likely to be veterans of Returns and Dragonfall, their omission leaves Chronicles with a noticeable lack of depth, and a lack of depth is harmful to a game’s longevity.

And speaking of longevity, there simply isn’t a whole lot to do with Chronicles once you realize that this is a strictly combat-oriented RPG and that there are no particularly interesting characters to talk to, no intriguing plot to uncover, or a particularly deep RPG system to invest in. This is a game designed entirely around the very simple premise of engaging in turn-based PVE in cooperation with other human players, and if you are looking to play a Shadowrun game for any reason other than that, you would be doing both yourself and the game a disservice. Shadowrun Chronicles is not necessarily a game that can stand on its own merits; it exists to fulfill the lack of multiplayer in the Shadowrun series, and while it does this rather well, players approaching this game from an uninformed position should do so only once they’ve become fully aware of what they’d be getting themselves into. In short: do not play this game by yourself. If you prefer a singleplayer experience, play Shadowrun Returns or Dragonfall, or even the upcoming Hong Kong.