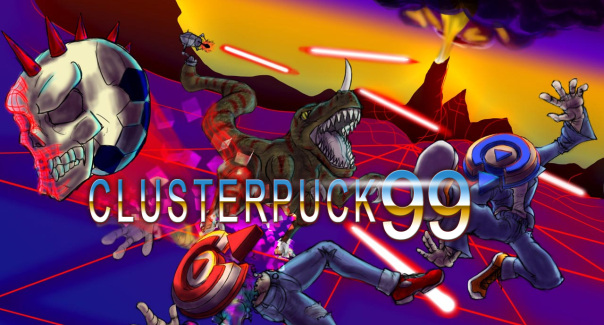 The ID@Xbox program has seen some serious traffic lately. What initially began as a low-key spiritual successor to the Xbox Live Arcade program that we experienced on Xbox 360 with a small library of titles (most being ported from Steam or mobile phones, and most being either puzzlers or platformers) has gradually evolved and expanded its selection, catering to more genres and target audiences than ever before. ClusterPuck 99, published and developed by PHL Collective, is a new title on the market that serves to break the latter tradition by presenting itself as a highly competitive arena sport that will push your reflexes to the test (something akin to an air hockey simulator, except that you can hold onto the puck and move more freely around the arena). Additionally, it boasts the options of cooperative or competitive local play with up to 8 controllers, or AI bots of varying levels of difficulty.

Upon booting up this title and feeling eager to start playing right away, one of the first things I noticed about ClusterPuck 99 was the wide variety of customization options that I had at my disposal. You will be presented with the options to choose the name and color of your “profile”, as well as the shape that appears on the back of the puck; this is extremely helpful as it means you won’t lose track of where your puck is on the board when playing with large teams. And speaking of large teams, this game really lives up to its title by allowing you to play with several AI (up to 10 per team!) and watch a cluster of pucks chaotically dance around the field, all fighting for the possession of one ball. You can choose whether or not to balance the teams and make the game as fair or unfair as you want it to be. If you happen to be somehow dissatisfied with the 30+ unique maps that are already offered, then there is also an impressive custom level builder available for the creative minds that are willing to pursue it. All of these options and more really gave me the feeling that I was allowed to play “my” game however I wanted.

This game has a very easy control scheme that anyone can learn and master within minutes. Apart from moving your puck around and aiming your shots with the two directional sticks, you also have the ability to fire two types of shots — the “normal” shot that can be launched at the simple press of a button, or the “charged” shot that comes with holding down a different button that will add more power and distance to the shot depending on the length for which it is held for. I would also like compliment the controls for how crisp and responsive they were to my inputs. This part of the game was done very well, and the simplicity of the controls also feels warm and welcoming to both newbies and veteran gamers alike.

Launching at an initial value of $14.99 (price may vary ever-so-slightly depending on one’s region), I actually find this price to be far too steep for what little content the game has to offer. Apart from its main mode and level builder, the game contains an unimpressively short challenge mode of just nine levels that are almost laughably easy and can be dominated after about an hour of practice. If you are mostly a solo player like myself, you are likely going to feel bored after completing all of the challenge levels and playing a few normal rounds against the AI bots. Frankly, I have picked up indie games that are worth one-third of this game’s price and have reaped dozens of hours of playtime out of by comparison. In the grand scheme of things, it may be cheaper for you to round up a group of friends and go to your nearest arcade to play a few rounds of some air hockey instead. I do not want to criticize the game too harshly on this, but I do feel that there is much more that could have been in it; I personally feel that the game’s lifespan could have been extended through the introduction of more game modes, extra challenge levels, or at least the additional option to play online against other people around the globe.

ClusterPuck 99 was entertaining while it lasted, but unfortunately, I found that my enjoyment of the game was rather short-lived. Ultimately, the game provides short-term entertainment at the cost of being somewhat forgettable in the long run. However, that’s not to say that I am unable to appreciate what the game does have to offer — and in fact, I may even recommend it to die-hard sports fans, or to those of you that are trying to get a close friend or significant other into video games for the first time. Because of its simplistic control scheme, the game is very undemanding with its learning curve (or lack thereof) and can be easily picked up and played at your convenience. Unfortunately, I still have to voice my disappointment over the lack of in-game content. At the very least, I can say that there aren’t very many other games like this one on the Xbox One platform (the closest possible title that comes to mind would be Other Ocean Interactive’s #IDARB, which was involved with Microsoft’s free Games With Gold program back in February of this year, but even that game still does things very differently from this one). So, if you have a little extra cash to spare and are willing to approach it with modest expectations, you might be in for a pretty good time.

– Aforementioned fun will feel short-lived, especially if you are playing alone
– Very little content to justify the price point

0 0
Previous ArticleHow Assassins Creed: Syndicate is a Service to Fans of the SeriesNext ArticleLovers In A Dangerous Spacetime Review (PC)