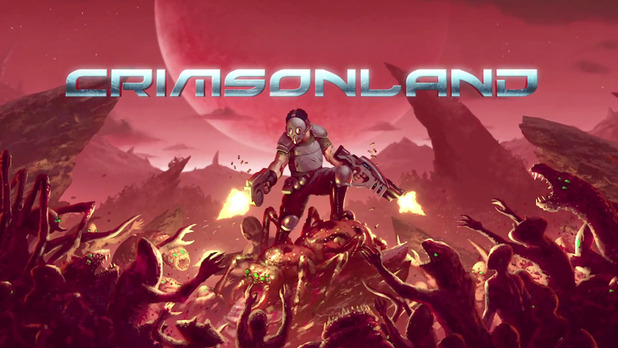 Crimsonland is an interesting game to attempt to review as the game was originally developed and released in 2003, with the game being updated and re-released on pretty much every console, with the Xbox One version being released this week. The problem with reviewing this game is that you can tell that it was probably a pretty decent game back in 2003, but it pretty much fails to deliver now.

Well, one of the first things that you will need to be aware of if you are considering this game is that there really is no rhyme or reason given for why this game is taking place. You are not told where your character is or why he or she is fighting off hordes of creatures. Now, I know that an action-heavy game doesn’t really need an in-depth plot, but a little bit of context as to why these events are happening would have been much appreciated.

While the re-release of Crimsonland has been touted by the developers as having updated graphics, you really aren’t going to be able to tell. The game goes with a top-down approach, but the camera is zoomed so far out that you can’t see much detail on any of the character or creature models. Not that there is a lot to see mind you, mostly you will be seeing hundreds or thousands of the same creatures with minor changes in color and size to denote stronger or faster enemies.

The lackluster models would be forgivable if the terrain and backgrounds were nice to look at, but no, they are as bland as you can get. They are generally just basic arenas with nothing to differentiate them from one another besides the color of the ground that changes from chapter to chapter.

The audio in this game is also a bit disappointing as the music in these types of action games is generally supposed to pump you up and get you excited to fight off the hordes of creatures. Unfortunately, the music in Crimsonland is very forgettable. However, the music may also be forgettable because you will most likely be focused on the extremely irritating grunts and groans that accompany the enemy deaths that you will be hearing dozens, if not hundreds, of times before a stage is complete. I had to stop myself from muting the game repeatedly just in the hopes that the audio would improve. It didn’t.

Now, this being a twin-stick shooter, Crimsonland’s other failings could have been overlooked if the gameplay was fantastic. However, the gameplay is pretty basic as far as this genre goes, and it rarely elevates itself past mediocre.

As with most twin-stick shooters, you will be moving around the map with the left thumbstick and aiming with the right while avoiding the hordes and picking up power-ups and new weapons. You will also have the option to have up to three people join you in the game, but even when played with friends Crimsonland commits one of the biggest sins that a twin-stick shooter can commit, it was boring. It didn’t really matter which of the many weapons or game modes I played, or if I played with friends or not, the entire experience left me just wishing that it would end so I could go and play a better game.

If there is anything that Crimsonland does right is that it provides a lot of content for your money. There are 60 stages to fight your way through in the normal Quest mode. Don’t get too excited, Quest mode doesn’t offer any missions, it is simply where you survive and unlock weapons and perks.

In addition to the many available stages, you will also find a long list of weapons and perks that you can unlock and utilize in all of the game modes. The weapons do provide a nice bit of variety. You can also play through a variety of game modes, such as Survival, which can help you get your money’s worth from the game, provided you can motivate yourself to stick with the game.

While twin-stick shooters are a blast to play on your own and with friends, Crimsonland fails to deliver on the gameplay, fun, and frantic experience that this genre is known for. If you are looking for a twin-stick shooter to play, you are better served spending your money on a far superior game, such as Assault Android Cactus or any of the Geometry Wars games.

Agree? Disagree? Let us know why in the comments below.