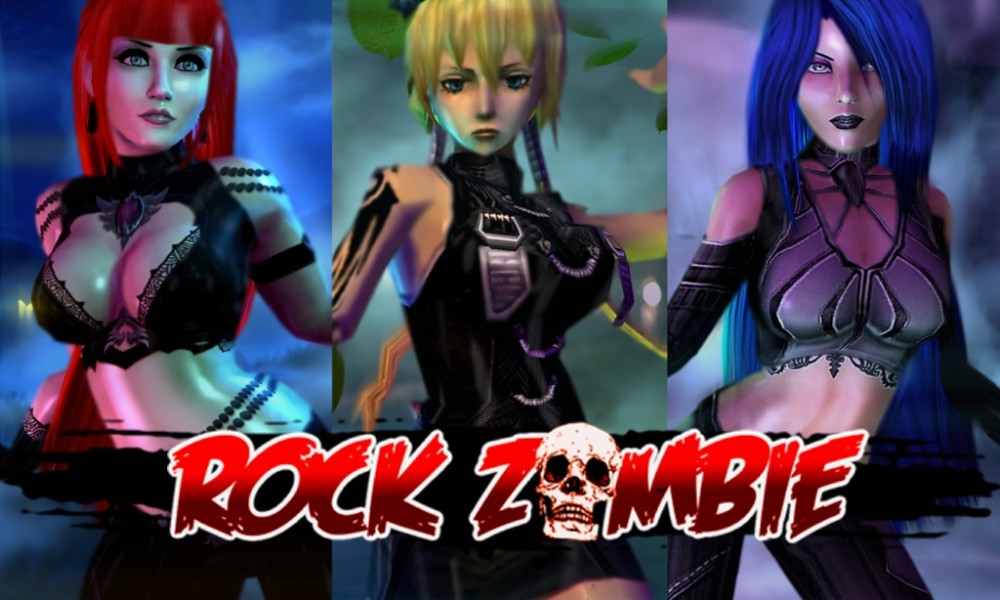 At first glance, Rock Zombie looks like a cheesy side-scrolling beat em’ up game with a minimal story. You would be correct! This is exactly what Rock Zombie is. A horde of zombies invades the rock concert of an all-women band and tries to eat their brains. Your goal is to kill all of the zombies, this in turn completes the levels and allows you to progress.

You may choose one of the three women to play as for your game. You use your guitar to beat up the zombies. Scattered around the various levels are coins, obstacles, power-ups, and collectibles. Killing zombies will net you some coins as well. Coins can be used to purchase new guitars and outfits for your characters. These offer various upgrades to speed, strength, etc. Unfortunately the game doesn’t have any combos, just a few bland animations for attacking. This can make the levels drag on for quite a while which is not fun. There is some sort of magic ability which allows you to shoot energy blasts at zombies, this replenishes with pick-ups and kills. Different band members have varying stats which effect gameplay slightly. Most beat em’ ups have co-op mode which is very interesting, Rock Zombie does not have this which makes it suffer tremendously. Framerate is steady but isn’t very high either, this makes the game look awkward while playing. After a few side-scrolling levels, there are driving sequences with motorcycles and cars. They are interesting but just offer small changes to keep it interesting. At the end of each level the other 2 band members join you and run to the next stage, this is where you notice the sub-par animations the most. Gameplay is fun at times but mostly bland.

The Graphics are not the strong point for Rock Zombie. They can be easily compared to a low budget indie title on the Xbox 360. I feel this game is nothing close to next-gen and is a bit of a disappointment. Character and zombie models have sharp edges and can look block-like sometimes. To be fair Rock Zombie does look better than some indie games out there. Stages look decent but not great most of the time. You can definitely see the low budget showing through in this department.

The sound design for Rock Zombie exceeded my expectations. Collecting coins sounded rewarding, smashing in zombie’s heads sounded fantastic, and the music got me pumped up during my playthrough. I enjoyed the sounds and feel that this was the best part of the game hands down.

Rock Zombie is an enjoyable game when you’re in the mood for a quick beat em’ up. Killing zombies is fun but doesn’t have a lasting appeal. If it had co-op play then this would be a totally different story. I enjoyed the game but there are better games out there to satisfy your zombie smashing needs.

Rock Zombie is set at $8 and is available on the Xbox Marketplace. I semi-enjoyed my playthrough of the game but feel that the quality is equivalent to a browser game on my computer. The story isn’t engaging and the levels are a bit too similar for my liking. I feel it is a decent game for a low asking price.

Do you plan on giving Rock Zombie a playthrough? Do you agree with the $8 price point? Let us know in the comments section down below!