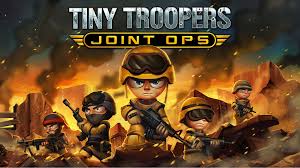 Prepare to command pint-sized soldiers across mini maps of mayhem because Tiny Troopers Joint Ops has arrived on Xbox One. Although you control a squad of troops across treacherous terrain, Tiny Troopers Joint Ops is a twin stick shooter at its core. Every mission has various objectives ranging from: destroy all the enemy troops or buildings, escorting civilians, or disarming weapons. As the player you command up to four troops per mission; you can also call upon specialist troops with specific skills who can help you tackle missions in style.

Your troops are controlled using the left thumbstick and fire their weapons using the right thumbstick. A quick tap of the X button will make them lay prone, A button brings up your map and the Y button is used to pause the game and order supply drops. In Tiny Troopers Joint Ops you are never out of the fight as long as you have some extra command points on hand. Grenades, rocket launchers and even backup soldiers can be requested via supply drop if you can’t find any in the map or use them all up. Using these special attacks requires holding down either LB, LT or RT and then aiming a crosshair with the right thumbstick at your enemy in real time. I absolutely love this control method because it adds tension during firefights. When you are pinned down with only one soldier and one grenade, you have to aim carefully while still dodging enemy fire.

Difficulty is never an issue in Tiny Troopers Joint Ops because you can choose how hard you want each mission to be. There are four difficulty settings to choose from before starting a mission including ultra hard mode, exclusive to the Xbox One version. The harder the difficulty you choose, the more command points you earn at the end of the level. These points are used to upgrade your weapons, unlock costumes or recruit specialist soldiers. Along with killing enemies to earn points there are also medals, dogtags and intel scattered to collect. Combine that with an up to 4 times multiplier and you will have hundreds of thousands of points in no time. Medals are used to revive fallen troops after each level. If you choose not to revive a troop, its replacement will have a lower ranking which means fewer hit points. Throughout my playing time, I never really felt a bond with any of my troops. If one died it never seemed like a big deal because there was always another one to replace it. I would have liked to see more character development to make me really care for my squad.

There are two campaigns to complete, soldier and spec ops. Each campaign has roughly 30 levels and shows the conflict from an ally’s point of view. In addition to campaigns, Zombie mode pits you against waves of undead that grow stronger each round; I found it to be one of the highlights of the game. The Xbox One version boasts four exclusive Zombie Wave maps, each one with its own unique style. These modes also include global leaderboards for the more competitive gamers.

Tiny Troopers Joint Ops has a cute graphical style that has translated well to home consoles. The environments are detailed and clear. Story cutscenes are told through voiced comic book style storyboards which are engaging and fun to watch. While playing the campaign and zombies mode everything ran smoothly, even with multiple enemies on screen. Levels load extremely fast as well, with most fully loaded in under five seconds!

One complaint I have is that some maps seem a little too big and too empty at times. The game rewards you for exploring areas off the normal path, but often you’re spending time exploring just to find one small reward or even worse, nothing.  Thankfully one attribute of your squad that’s upgradeable is their movement speed. Leveling this area up a few times helps take the sting off traversing the entire map. There’s not much to complain about aside from that; levels become much more challenging as you progress through the story and if you are ever stuck you can lower the difficulty or recruit specialist troops.

Tiny Troopers Joint Ops is my kind of twin stick shooter because you get out of it as much as you put in. If you want to play on easy, dominate the enemy and just enjoy the story, you can do that. Those who want a tough challenge can crank up the difficulty to hardcore, collect every item and finish all the optional missions for 100% completion. You aren’t penalized for your preferred playstyle which is an admirable touch be developer Kukouri Mobile Entertainment.  With 50+ levels, varied difficulties and zombie horde mode, there’s plenty of content and fun to be had in this wee warzone.

+ Zombie mode is a blast

–  Some maps are too large

–  No genuine bond with your troops