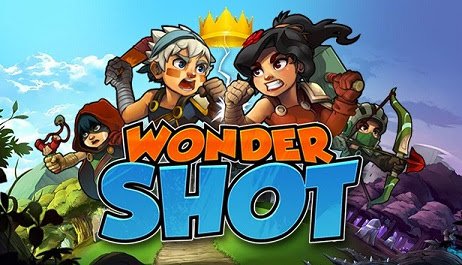 Wonder Shot is a cute, funny game comprised of a series of minigames that involve shooting arrows around obstacles and defeating a number of enemies called Monstees and Patsees.

At the title screen you choose between Battle and Adventure mode. When in Battle mode you can choose which kind of battle you’d like; Last Nipper, Nippernator, and Diabolik Duel. You can also create a custom match and choose if you want to be on teams or not. Each of these modes is for 2-4 players on the same console. After choosing a battle you get to choose which character you want to play, which determines which weapon you use. Your choices are arrow, boomerang, slingshot, and hammer. Each weapon has a different ability, which I will go over later in this review. In Last Nipper you fight until you are the last man standing. Nippernator gives you a point for each time you hit another player, and at the end of the round the player with the highest score wins. Diabolik Duel is a sudden death match in a small arena.

Winning Diabolik Duel is the same as Last Nipper, but the sudden death adds a degree of difficulty. Under each battle type you have the option to choose “more rules” which adds or takes away different elements of the game. You can choose the number of points to win, the time before the match turns into sudden death, whether or not everyone uses the same weapon, an option called “you miss, you lose” which is self explanatory, and whether or not to include bonus items. The bonus items include Super Speed boots, Phantom, which allows you to run through walls, Super Shot, which allows you to fire through walls, Slow Motion, which can be temporary or infinite, and Shield, which makes you invincible. These items can also be found in all the modes of the game.

As I said each character wields a different weapon with different abilities. The bow and arrow shoots arrows and has a homing arrow that can be shot, though it cannot track through obstacles like walls or barrels. The boomerang allows you to hold the boomerang out and move so that it comes back to you on a different path, which can kill enemies on the way back to you. The slingshot’s ammo can bounce off of walls and barrels. The hammer is used as a melee weapon but it can also be thrown as well as allow you to punch through walls.

Under Adventure mode you can choose between Challenges and Endless, where you fight off endless waves of enemies. This can be played by yourself or with up to 3 other players on the same console. Each level of the Challenges presents a different minigame based on shooting arrows, using a hammer, manipulating the boomerang, and bouncing slingshot shots around the arena. Each level has a timer and a certain number of enemies to defeat. Each enemy killed gives you a small bonus on the timer. At the end of each level your time is added to a leaderboard and shows you the name of a “rival” who got a slightly better score than you. There is also a bonus for completing the level on the first try, and beating the developer’s time, a feature I thought was really cool. Some of the levels also incorporate portals adding a bit of a puzzle element to the game. Each chapter has 4 levels and a bonus challenge. The difficulty is bumped up by adding more deadly enemies and lots more of them. The game also uses a leveling system and you gain points based on your score after each level.

The game uses a top down view and the graphics are very neat and clean. The characters look like cute little anime style characters and each loading screen has a funny little scene to look at while loading. The game uses enemies under two names, Patsees and Monstees. Patsees look like little fish baloons and have no attack but can move around quickly. There are two types of Monstees; one that shoots fireballs, which resemble poes from The Legend of Zelda, and one that uses a melee weapon, which looks like a squirrel. I could of course be completely off on the description of what these things actually are, but that’s what I see! The music doesn’t vary by much but it isn’t a big part of the game. It is light and fits well with the silly theme of the game.

I did not encounter any glitches in this game, which is excellent. The tutorial also merits a mention as it is very detailed and well laid out. All in all this game is just a hoot, especially if you have friends to play with! It is a super fun game and I definitely recommend it!