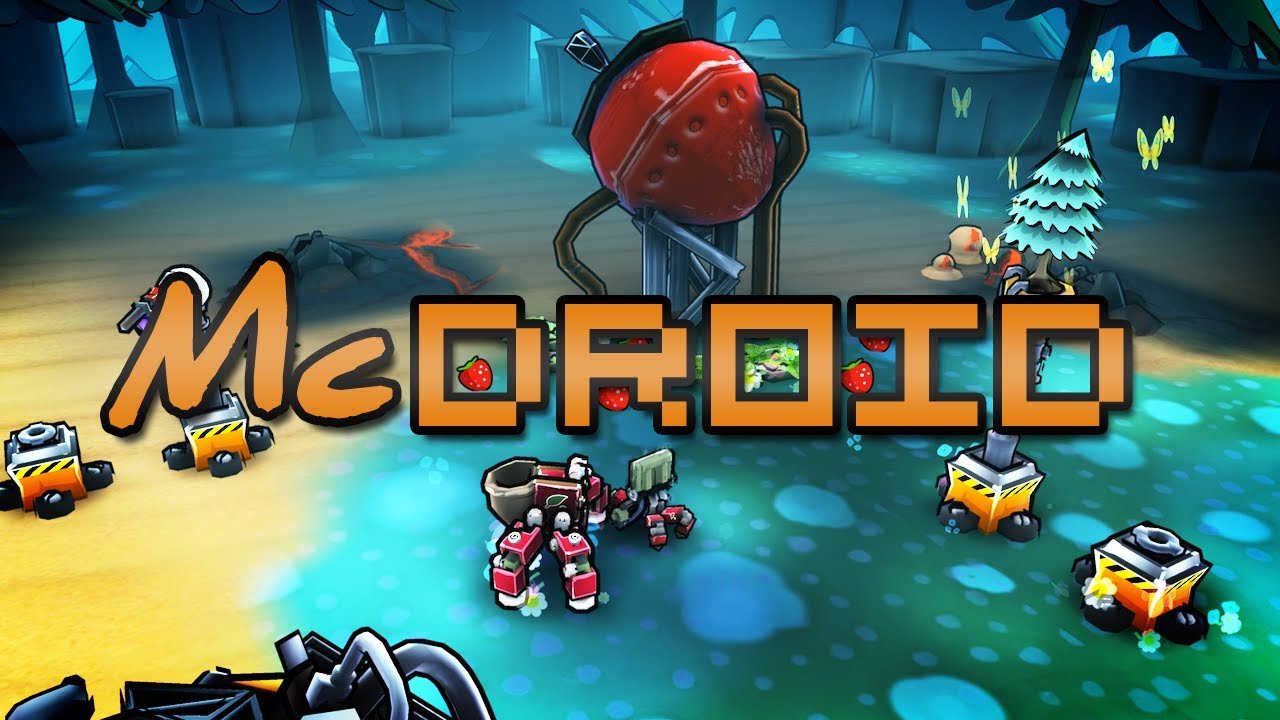 McDroid is a tower defense game with a few unique features that make it stick out. It starts out with you as a little robot, I am assuming named McDroid, landing on your home planet with your friend, the space ship, whose name is Luigi! You discover that your home planet has been poisoned by some unknown alien force. Your goal is to progress through levels with your pal Luigi the ship, collecting items to help you heal your planet!

I’d like to first mention the music and graphics in this game. The music is 1960’s rock style, and the newer version of the game also features music by Michael Jackson, which is one of the things that I think makes this game stand out. The graphics are very much cartoon like, similar to Borderlands in a way, and it works together well with the music to create a fun environment in the game for which to slaughter aliens by. The dialog between McDroid and Luigi is super funny and many comedic elements can be found throughout the game. The sound effects are also very cartoon like and the mix of cartoon fun and killing aliens work extremely well together!

There are many different types of aliens, far too many to list here, but I will go over the first few. Space Worms are pretty standard minions. They are fast but don’t do much damage. Spitters look like 4 legged spiders and shoot fire projectiles. Snail With Teeth is, well, a snail with teeth. This is one of the more nasty aliens you fight because they can do a substantial amount of damage, especially if there are more than one of them. Some of the aliens are variations on these few base models, for example the Thief Worm, some are something else entirely. There are so many different monsters with different abilities. It really keeps you on your toes! While the enemies present most of the challenge some levels also factor in terrain difficulties. For example, the aliens corrupting the core of the planet can also corrupt the ground, which will damage you and your turrets.

The layout of the levels on the overview map is another unique feature I really like. It is set up as a platform you can run your robot around, choosing between different types of levels; battles, arenas, and the Research Center. Aesthetic upgrades can also be found littered around the platform. You can change the look of your robot with these, but they don’t do anything else. As soon as you are set free on the platform, after the tutorial/first level, you can find a set of green feet to attach to McDroid, and paint a smiley face on his sides.

Battles are the main part of the game and like most tower defense games the difficulty is increased by adding more aliens, tougher aliens, and of course eventually both. When you build turrets you can place them on platforms as well as carry one on your back, but only one at a time. You are defending the good ship Luigi and you can repair it/him and the turrets by standing next to what needs repaired. The McDroid arm automatically extends and repairs whatever you’re near that needs repaired. You also need to keep an eye on your robot’s health because if it gets depleted then its game over, man! Things can get very chaotic when a handful of tough monsters spawn, because you have to keep them at bay and your defenses and ship repaired all while continuing to collect strawberries, which will disappear if not collected soon enough! And on top of that the game rains meteors on you at random intervals! You can also build different types of trees which boost weapons, speed up strawberry growth, and neutralize any corrupted ground caused by the aliens so that it is safe again.

Arenas are pretty self explanatory, but by no means any easier than the battle levels. You are able to place several platforms for your defenses, so you have more freedom, and there are various maps with various treacheries. For example, the first arena is in a lava pit.

Upgrade levels are called Research Centers. Your ship takes you to an area with no hostile aliens and you get to choose between battle upgrades, McDroid upgrades, and ship upgrades. Each of these can be bought with diamonds, green orbs, and other loot items dropped by aliens. The first weapon you have is called a Puny Laser. You can also unlock explosive mines early on as well as an armor boosting ability and a flower that lets you walk across cursed terrain. There are blueprints scattered throughout levels as well that will unlock various new things. The descriptions on the blueprints are hilarious! The first laser upgrade states that other uses include “kindergarten lighting and teeth bleaching”!

Other upgrades to McDroid include missile capability, the ability to spawn slave drones called Tesla bots (love the name) who will harvest your strawberries for you as well as do minor damage to enemies, and a Tesla coil which fries small aliens and stuns bigger aliens. You can even purchase upgrades and unlock new, stronger types of trees! Each of these has multiple tiers so you can strengthen and customize your defense systems. Luigi the Ship’s first armor upgrade is described as a “fur coat made of platinum”! The cartoon theme spreads in to every aspect of the game and makes it just so much fun!