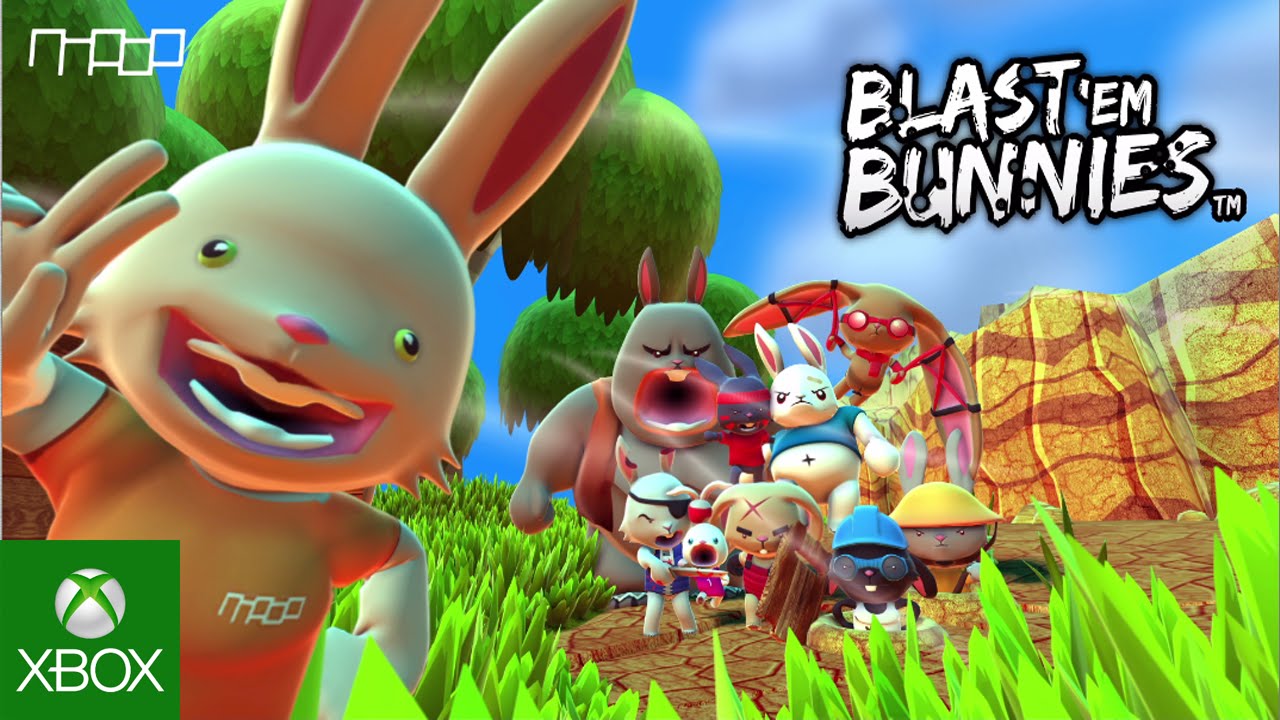 Blast ‘Em Bunnies is an arcade style game where you play as a bunny blasting evil bunnies invading your farm with various vegetable weapons. The game is cute and fun, but, like most arcade games, it does not have a lot of substance.

The goal of the game is to defend your farm from invading bunny forces. There are nine different enemy bunny types, ranging from standard tank types, Ninja bunnies, ranged, and flying bunnies. Most bunnies drop bonus coins when you kill them, ranging from one to fifty. While the animation and look of each bunny varies a little, none of them really do anything different than approaching you at different speeds, except for the one enemy type that throws ranged attacks. Also, The spin on the turret you’re on is very slow and does not have a very big range of motion. The whole shooting mechanic in this game is just flawed to bits.

Speaking of the cannon, the aim is way off. You have to aim lower than your target to hit it. I could understand this if you needed to aim higher due to arching physics, but lower makes no sense. The cannon starts out shooting one carrot, but you can pick up different types of ammo, including triple carrots, radish grenades, and the Coin Magnet, which draws in nearby bonus coins so you don’t have to shoot each one. Much like the enemy bunnies, despite the different look of the ammo none of them really do anything different, except for the one that attracts nearby coins so you don’t have to shoot each one. They all seem to do the same amount of damage, if not it does not vary by enough.

The game takes place in one level. Yes, one. There are more levels,  but they are all being sold as DLC. You can, of course, buy the bundle that includes all the DLC, but it is just different themes painted over the same base game. The modes of the game do expand it a bit, but not by enough. You can play the tutorial, survival on easy, normal, or hard, and endless on normal with invincibility or hard with no invincibility. The lack of game play quickly makes the game repetitive and not entertaining. Even with different levels to play I can’t see this game being played often. It definitely gives it a nostalgic classic arcade feel, but even many very simple arcade games have more than one level.

The graphics and music are simple. Not terrible, but not anything notable, either. The music is up beat and fits well in the game, but like the rest of the game, it is repetitive. And it is the same story with the graphics – plain, just good enough, nothing special. All in all this game feels incomplete and I would not recommend it. Even as an arcade game it is lacking anything that makes it unique, fun, and/or entertaining. I have played $0.99 cent indie games that have had more depth than this. With some work it could be better, but as is it is right now, it’s just not good at all.

0 0
Previous ArticleShould Naughty Dog Make The Last Of Us 2 Or A New IP?Next ArticleThe Division Players Are Reporting A Bug That Keeps Them Locked In Brooklyn