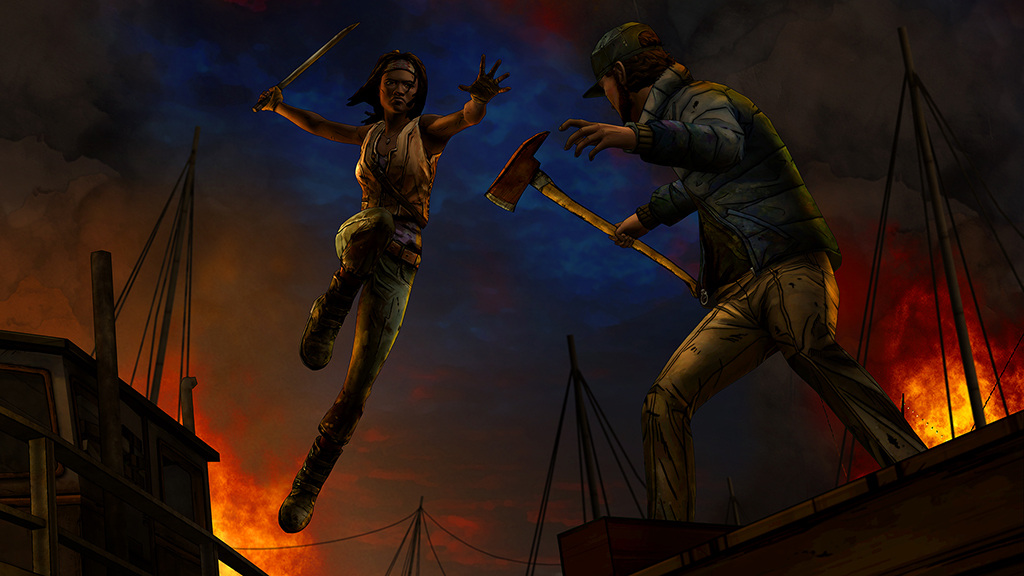 Let’s be clear, it’s apparent from the very start of Episode 2 where things pick up straight where Episode 1 left off that Michonne is a force of nature. Similar to how we’ve seen Carol in the TV series before, Michonne is on a war path. She’s being pulled further down into the dark abyss of her own mind; causing hallucinations of her dead children. In this episode, we see Michonne running on survival mode and we’ve perhaps never seen her so deadly. We get a front row seat to her increasing paranoia as she perceives threats from around every corner, leading to a genuine feeling of anxiety permeating from this episode. One of the best things about this episode is that it successfully manages to make you feel the pain she endures and the challenges, both internal and external, that she has to face.

Give No Shelter picks up right where the first episode ended, with Michonne, Pete and Sam trying to escape from the short tempered Randall and his sister Norma. This opening scene is perfectly executed in the magnitude of its intensity. This scene alone is one of the best ever done by Telltale and really got the player involved in the action from the very start of this episode. There is no lukewarm start like the first episode, you better be prepared for the sheer gravitas of this opening sequence. What’s the only problem with this scene? Just that it had to end.

Once our characters have succeeded in their daring escape and come to an area that’s seemingly less of a threat, I did begin to worry that maybe the intensity of the opening sequence would quickly fall off and I’d be disappointed with what was left of the episode. Boy was I wrong. There’s definitely some stuff here to get your nerves going and it’s classic Telltale while still introducing something fresher that was missing in the first episode. Everything that happens in this episode has meaning behind it. Whether it’s learning the names of Michonne’s daughters or other plot and character developments, everything just falls into place and adds to the depth of the overarching story. 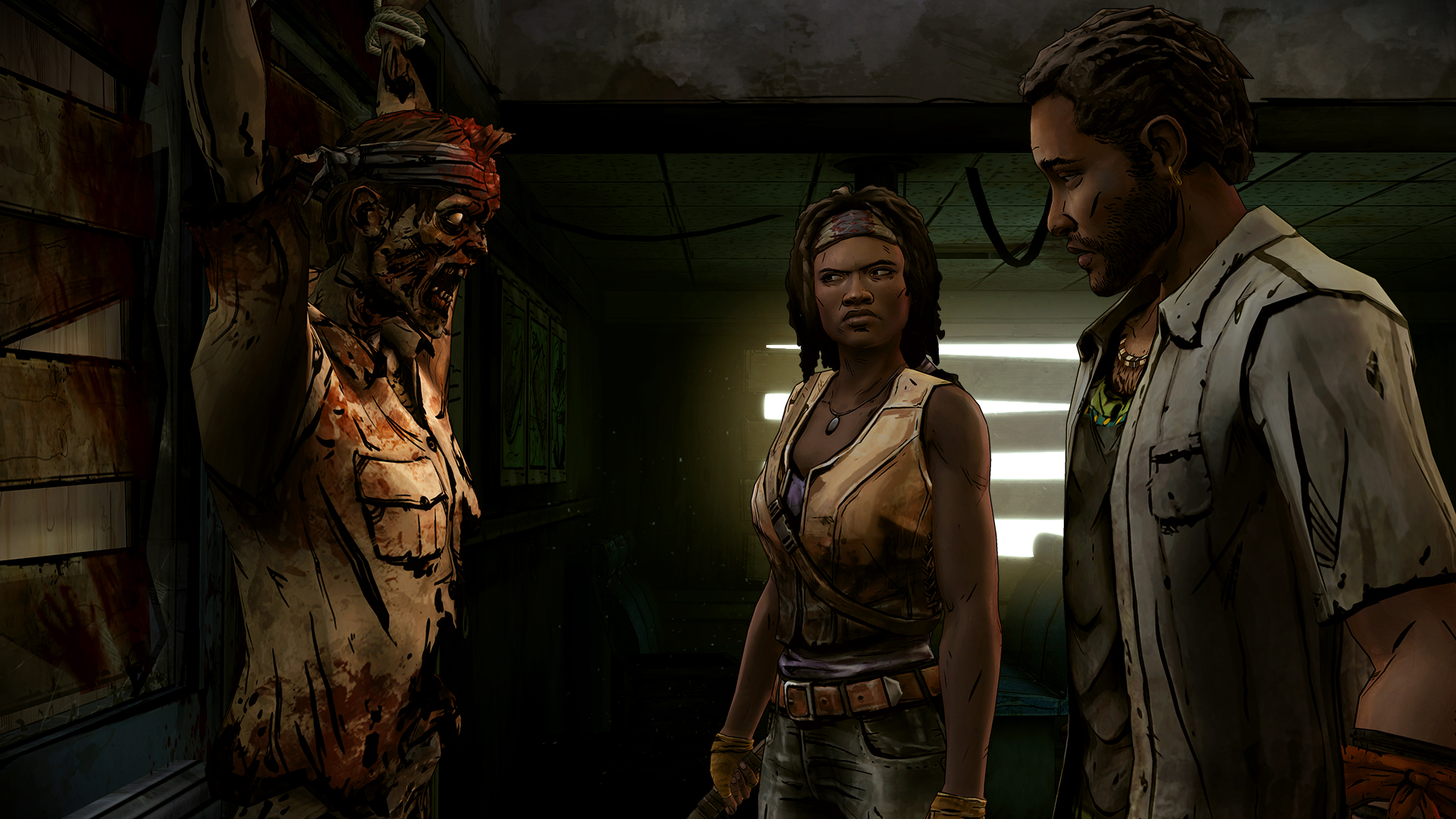 I loved the hallucinations in the first episode and Michonne’s state of lucidity that saw her slipping in and out of the real world and between her tormented imaginations.  When she was having hallucinations of being back in her home just to suddenly be thrown back into reality in the face of a near-death situation, it was made clear early on that the stakes were high. Due to this, I did approach episode 2 with a fear that Telltale would overplay this hand and the hallucinations would fall victim to monotony and repetitiveness. However, as many of my fears with this second episode, I was proved wrong and I ended up enjoying the hallucination scenes in this episode even more than the first episode, even though both were quite excellent.

For the sake of transparency, it’s noteworthy that those technical issues and glitches that we’ve all become accustomed to with the Telltale engine are back in the second episode of The Walking Dead: Michonne. Well, as nice as it would have been to say Telltale fixed the problems present in their previous games, alas that is not the case and graphical problems are common enough that they feel like an annoying detraction from an otherwise very immersive game. I’ve not run into anything that’s game-breaking or that completely took me out of the experience but they were enough to label them a nuisance and to keep hopelessly wishing that Telltale get round to fixing them.

The “Peeking” mechanic also makes a return from previous Telltale games in this second episode of The Walking Dead: Michonne but unfortunately it is used in abundance. Instead of immersing me further in the game, the overuse of this mechanic ultimately made the game feel too much like a game. While that might not make sense to some, it’s clear for hardened fans of this story-driven genre of games that mechanics like this detract from the experience. It doesn’t add anything to the story and there’s no real sense of achievement for successfully being ‘sneaky’ so it’s a shame to see it used in such abundance within this episode. 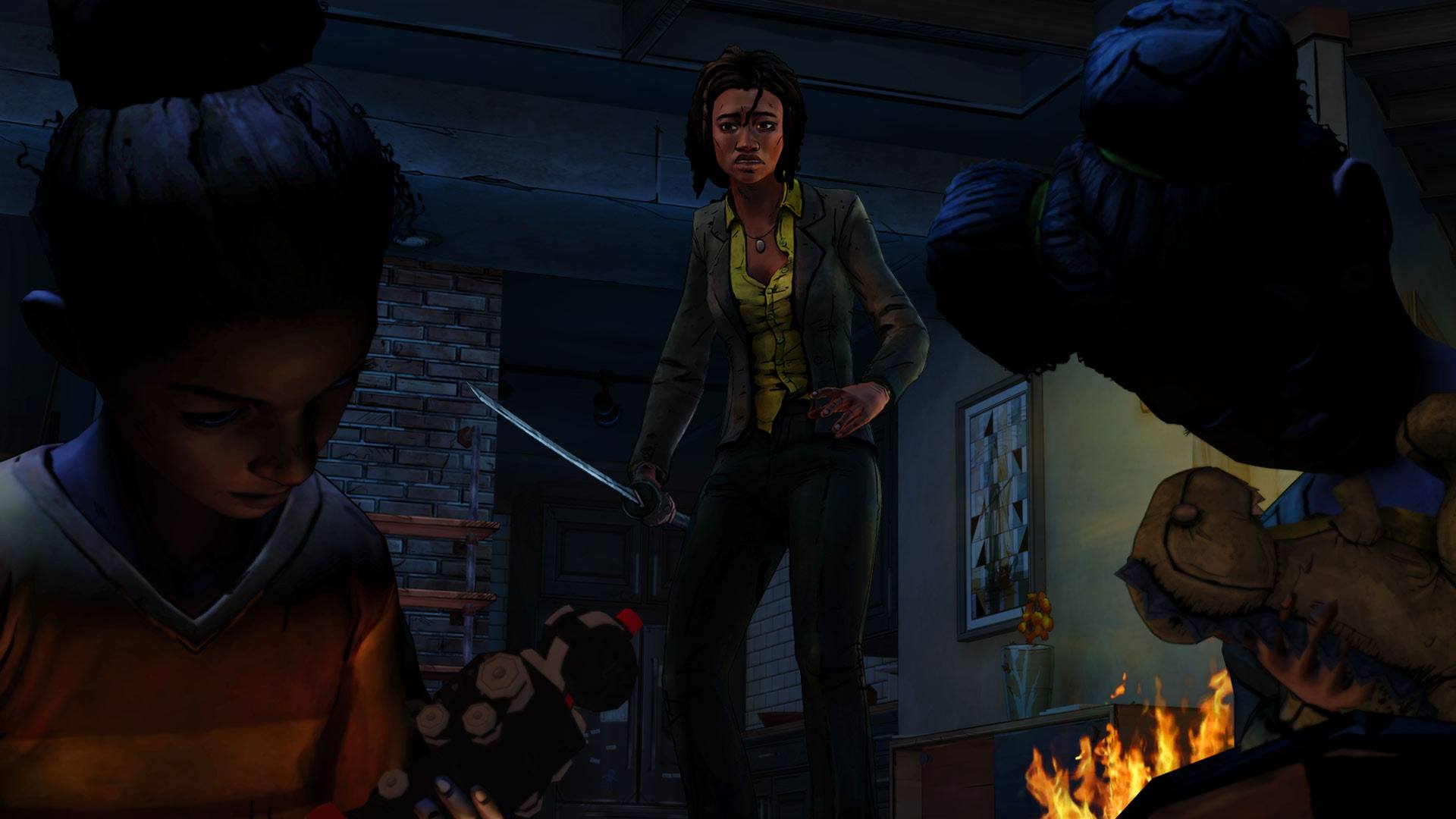 It’s also worth mentioning that voice actress Samira Wiley shines again in her work as Michonne. While all the main characters do a good job with voice acting, it’s apparent that Wiley’s Michonne clearly stands out amongst the rest of the cast. She’s well known for her role in the Netflix show ‘Orange is the New Black’ but she really comes into her own here. While some fans may be disappointed by the fact that Danai Gurira wasn’t the one to voice act Michonne here but Wiley’s work is more than acceptable.

Episode 2 of The Walking Dead: Michonne does an excellent job at improving upon the foundations set by the first. While the reoccurring graphical glitches that are common with Telltale games still make an appearance, the episode is so immersive and intense that they are only a minor nuisance in an otherwise great game. Episode 2 leaves me thoroughly excited for the final episode and that’s a testament to the work and improvements made by Telltale with this second episode.