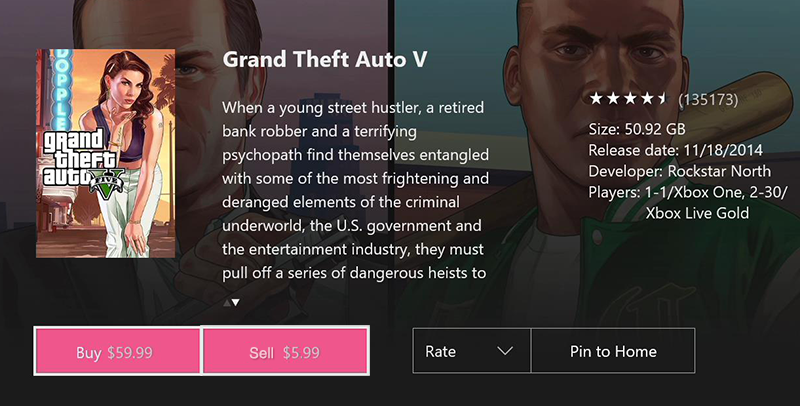 When digital games started to become available on consoles, I thought it was nice and convenient but something that I would never do. I liked having the game in my hands, I liked knowing that if I ever wanted to get rid of it, I could sell it or go to a game shop and do a trade-in. But with all types of media (music, books, movies, games) going digital more all the time, it makes me think of where this is all going, and I’ve come to the conclusion that Digital trade-ins are the way forward.

One major benefit to the companies behind the consoles is that it keeps the money in their pockets, for example, someone buys a digital game at launch and two months later decides he doesn’t want it, he trades it back in on his console from the comfort of his own home. Gets a certain percentage back that he can use towards more digital games. This would be an effective way to take money away from companies like Game Stop but still allow for players to have somewhere to get money back for their games.

One thing that will be interesting to see is if and when this comes out, will be the trade-in value that the console companies will offer because it will still need to be competitive with stores even though it’s in two different formats because that can be the decision for players to choose between digital and physical.But as gaming becomes more and more digital, more stores will go out of business and the console companies will have more monopoly in terms of pricing and trade-in pricing. I’m a big fan of competition as it forces companies to keep their prices lower to appeal to more customers.

What I think would be really cool is the ability to view your friends video game library so if you’re looking for games that your friends are playing you can see that online. And maybe even further down the road, the ability to loan a game to your friend, now obviously there are people who would abuse that, so maybe a game can be “loaned” for x amount of days, and while its out on loan you can’t play it until it comes back to you. Just some thoughts.

But as gaming becomes more and more digital, more stores will go out of business and the console companies will have more monopoly in terms of pricing and trade-in pricing. I’m a big fan of competition as it forces companies to keep their prices lower to appeal to more customers. Another issue is that if everything goes completely digital is that there are so many people myself included that like to have the ability to buy and sell ourselves, and if everything is digital that will no longer be an option.

I do truly think that one day it will be fully digital. I personally hope that it’s a day far in the future, I love to collect physical editions of my favorite games, especially games that have cool items like the Halo 3 Legendary Edition Master Chief helmet, those kinds of things would all have to be sold separately, but instead of physical items like that, I believe we would be seeing multiple digital versions of the same game, things like season passes, or cool armor sets, etc. would become the new standard in gaming.

Do you buy physical editions of video games still? Or have you already made the transition to digital gaming? Would you like to see console companies introduce digital trade-ins? Or are you against it? As always, please let us know your thoughts in the comments below. And until next time, keep gaming!