The hotly-anticipated Gears of War 4 was announced at E3 2015 and shocked many with the reveal of six minutes of tasty gameplay. After that, the game went on a hiatus and no new details were shed on the game for quite a while. However, recently the details have been flowing in at a torrential pace and it’s safe to say that from what we’ve seen and heard that Gears of War 4 is looking to be a return to form for the hugely popular series and perhaps even the huge system seller that the Xbox One needs.

There’s certainly no shortage of confidence with the Xbox team and new developers The Coalition who have already announced a release date of October 11th for the newest entry in the hugely popular Gears of War franchise. It’s no surprise that the series was hurt by the lacklustre Gears of War Judgement but Gears of War 4 and more specifically The Coalition look to be turning the ship in the right direction and Gears 4 is showing a lot of promising signs.

To spot this confidence look no further than the beta tests Xbox One owners will be able to enjoy as early as the 18th of this month as a sign of the faith that The Coalition have in their game. Holding a beta test 6 months before the game’s launch reflects how the team must have a lot of faith in the multiplayer portion of their game as it stands but also shows that they’re giving themselves a decent amount of time to make any necessary/fan-requested changes. This is an example of a beta test done right, unlike The Division which held beta tests so soon to the official launch that it was hard to imagine any significant changes could have been made.

Fans were also treated to the reveal just recently of the official cover art for Gears of War 4 thanks to Entertainment Weekly. 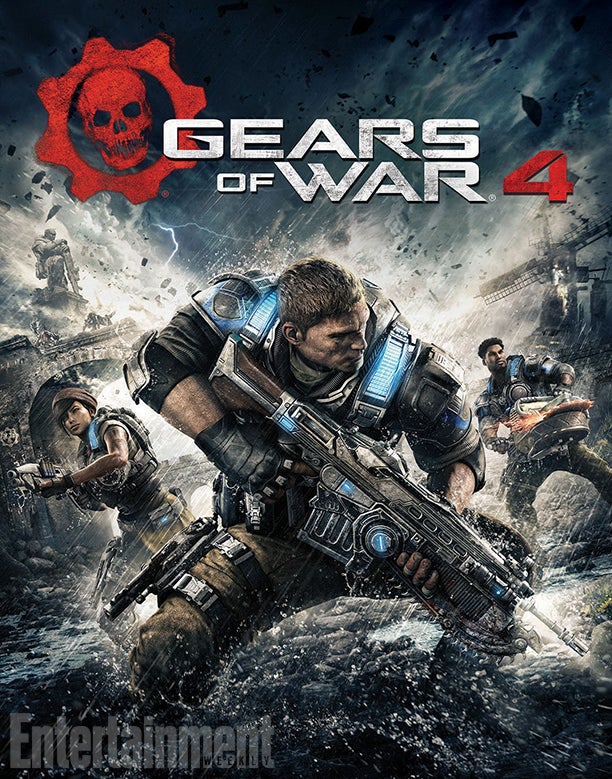 “‘Weathering the storm’ was sort of our line for the key art … because we wanted that idea that the environment and the weather in particular is a big part of Gears 4 and how it affects the characters and the story and the gameplay,” said Rod Fergusson, studio head of developer The Coalition, which took over the franchise when Microsoft acquired it from Epic Games. “Having the three heroes on there was important and then allowing them to showcase what’s new and represent themselves we thought would be cool.”

At the time of writing this article, fans have been teased yet again with a short teaser trailer of a full trailer that is set to hit on April 10th after the premiere of Fear the Walking Dead.

The Nightmare continues on Monday. Check back for a huge #GearsOfWar reveal.https://t.co/YUIgunUW4y

The Coalition have been in full force recently thanks in part to coverage from Game Informer in revealing new details about the upcoming Gears 4. Game Informer’s continuing coverage of Gears of War 4 has recently also unveiled some new details about the approach that Fergusson and The Coalition are taking the Gears of War franchise in. Gears of War 4 is set 25 years after 2011’s trilogy concluder  and stars a trio of new heroes – Kait Diaz, Delmont Walker and leading man JD Fenix, son of original trilogy protagonist Marcus Fenix. With Gears 4 shaping up to be a return to form for the hugely successful original trilogy, it’s also useful to look back at the success of previous games to gain insight into the possible success that Gears 4 will have. The Gears of War series has sold over 22 million copies to date, driving more than $1 billion in lifetime revenue. For comparison, this puts the Gears franchise on a level with another hugely popular franchise like Uncharted, but is still short of Halo’s overwhelming success. During the last generation Gears of War was considered one of the Xbox 360’s most fruitful franchises, second only to Halo. Its implications for the Xbox One should not be taken lightly. The Gears of War ultimate edition remaster of the first Gears game on Xbox One has also enjoyed relative success but it’s Gears 4 that all the fans are waiting for.

It can’t be denied that Halo 5 helped give the Xbox One a big push in October of last year with Microsoft announcing just one week after Halo 5 launched that there had been $400 million in global sales of Halo 5: Guardians games and hardware, pushing the franchise to over $5 billion lifetime. However, it’s difficult to determine the exact sales of copies of Halo 5 and some have reported that it may have been lower than earlier entries in the franchise. Due to this, it’s no surprise that Microsoft is starting the marketing on Gears 4 this early and perhaps they believe that Gears 4 can do what the Gears franchise couldn’t in the previous generation and go toe-to-toe with the commercial success of the Halo franchise.

All things are looking good and it’s hard to deny that Gears 4 is shaping up to be a huge system seller for the Xbox One. Do you think it will be? Let me know your thoughts and opinions by dropping a comment below.