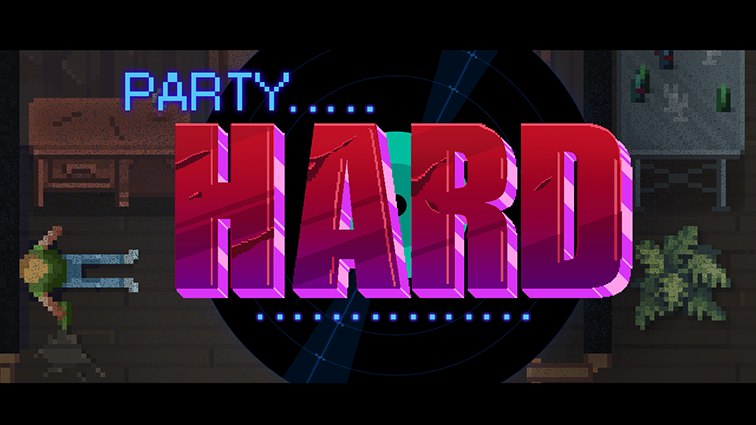 It isn’t often that I find myself relating to a serial murderer, but alas Party Hard found a way to make me do just that. Most of us have found ourselves turning in for the night, only to be stuck staring at the ceiling listening to noisy neighbors.  Party Hard lets us live out our sick fantasies of brutally murdering those responsible for the noise and silencing it once and for all. You literally play as a guy who wants some peace and quiet, and who will go to any extremes to get it. Originally on PC, Party Hard has arrived on Xbox One and PS4 thanks to publisher tinyBuild GAMES. Is this slasher game a cut above the rest or is this fiesta a flop?

Spanning parties across the country, Party Hard puts you in many unique environments and gives you plenty of tools to play with. The goal of every level is the same, kill everyone without being caught by the police. How you go about that is where the variety and fun come into play. As the main character you are equipped with a knife that kills everyone in one hit. If anyone sees the killing they will immediately call the police and they will likely bust you, although it is possible to evade them. Dead bodies can be picked up and hidden in dumpsters, sewers and many other areas, ala the Hitman series. Again if anyone sees you holding a dead body you are going to have a run-in with the law. Traps can be set in every level such as: poisoning a punchbowl, starting a runaway car or setting rooms on fire. Leaving a dead body on the ground will cause whoever finds it to call the police; they will tag the body and leave or sometimes wrongly accuse another partygoer. Dancing in the middle of a group will cause them to split up, leaving them ripe for the picking. Combining patience, timing and the traps is key to completing each level.

There are many nuances to the game that took some time to get accustomed to. Line of sight is tricky because there will be times when you think nobody can see you, yet you are spotted. In addition, there are moments when you think for sure someone saw you, yet there’s no alarm. Party Hard requires patience and a plan for every level, players who try and go Rambo will find themselves starting over every time. I enjoy having a game that’s about mindless killing but actually requires the mind! The levels are challenging and occasionally frustrating, but always rewarding when completed. The game is supposed to have random variations in each level, but I found them to be very minor. I noticed when retrying a level there may be traps in different areas or sometimes gone completely. I actually found it annoying when a level was missing a key trap I wanted to use. I found it easier to just die on purpose and hope that all the traps were available in the next try. There are 4 other characters that can be unlocked, but I always preferred playing as the “tired guy” you start with.

Graphically the game has small pixelated characters that look similar to the game IDARB. That art style works great as there are lots of colorful, unique NPCs. The entire level can be seen on screen which gives you a birds-eye view of everything going on. One of Party Hard’s highpoints is the music soundtrack. Every level has a great party song playing and it really creates a great atmosphere for the game. In between levels there are story scenes that are fully voiced and have more detailed visuals. The game runs pretty smoothly with dozens of characters on screen at once, I never noticed any slowdown or other graphical issues.

There were a few parts of the game that I had some issues with. Many times when dumping a body, you will hear the corresponding sound that tells you it was successful, but the body will still be there. More than once I tried dropping a body off a building, heard the falling scream, but the body was still on the ground. I’m hoping that the developers can clean this up a bit with a future patch. Some NPCs can fight you and that gets confusing as well; the security guard enemy will sometimes 1-hit kill you and other times just knock you out. For a game that requires much planning and execution, it’s annoying to have this interaction be seemingly random.

Despite the occasional gameplay hiccup, I still found myself coming back to Party Hard. No matter how many times I died in a level I always felt confident that I would win with practice. The unlockable characters each have their own skills which alters your usual strategy and adds replay value. As I mentioned earlier the killing may be mindless but you will definitely need your mind to succeed. Console owners looking for a fun, over-the-top challenge might want to take a stab at Party Hard.

+ Gameplay is challenging but very rewarding

+ Lots of levels and unlockable characters