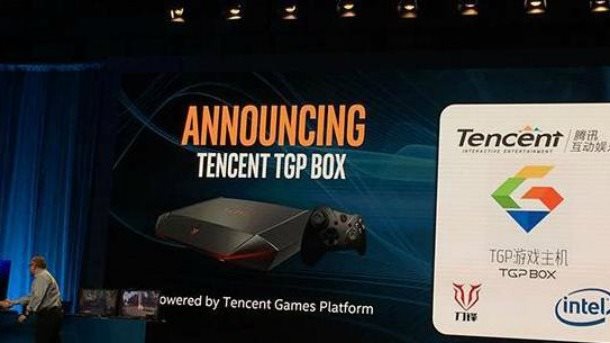 The owner of Riot Games, Tencent, announced recently a new gaming console called the Tencent Games Platform at CES Asia (Source: AllChinaTech). While little can be said for the name of the console, the specifications inside are something to ponder about.

With a sixth-generation Intel core processor and a Windows 10 operating system on board, the Tencent Games Platform can download and stream games to the console such as League of Legends, FIFA Online 3, NBA 2K Online, Monster Hunter Online and Need for Speed: Hot Pursuit Tournament – all of which have had help from the conglomerate in the past in bringing said games to Asia. More games are to be announced for the console later this year. Amongst this, the box, named as Blade BOX is to be equip with a ‘TGP BOX’ mode, that allows the owners to download games quickly or update them, but also start games locally as well as live streaming them. Tencent has a lineup for their next addition of games including:

In 2014, Tencent grew 28% with a revenue growing purely from smartphone games and PC games. Statista, an online statistics portal shows that global shipments of game consoles was around 50 million in 2015, and is expected to rise another 3 million in 2016. With this rising number of popularity of electronic equipment, the Chinese game market is entering a pretty huge stage of development. According to Newzoo, a game research institute, China has 173.4 million gamers which is the highest number of gamers in the world. Tencent have put their primary focus on phone apps in previous years such as WeChat.

While Riot Games is a popular and well-known company here in the western regions however Tencent is a pretty huge name in Asia which has a significantly huge market for consoles as a previous ban from 2000 was recently lifted last year in regards to console gaming.

Tencent is more of an investment company that doesn’t have a major focus, however does have a big part in entertainment such as music and television as well as other subsidiaries like social media and online shopping. It bought a huge stake in the development studios for League of Legends (Riot) back in 2011 and another in the developer studios for Gears of War in the year following. Today, Tencent Games is the largest online gaming community in China, so while this may seem like a small competitor for Sony and PlayStation in some continents, it most certainly isn’t for Asia.

This will be a tough road for Tencent, however with the points mentioned previously the market for a new console in Asia is definitely there – with PS4.5 coming out soon and the Xbox One moving along slowly it could be on par with the two, but it might not work in Tencent’s favour. What do you think? Let us know down below in the comments!