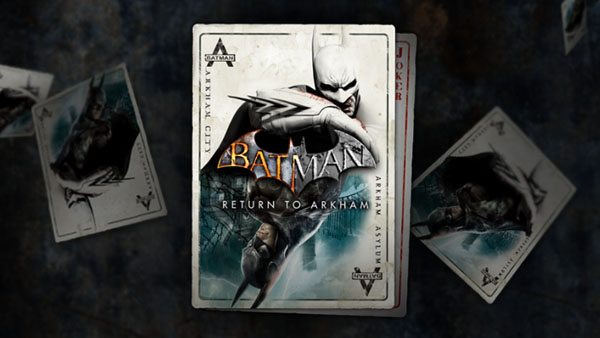 Batman: Arkham Asylum is where it all began. Originally developed by Rocksteady Studios and released in 2009, the game pushed the envelope for action, adventure and super hero games and exposed players to a unique, dark and atmospheric adventure taking them to the depths of Arkham Asylum. Featuring an original story, gamers can move in the shadows, instill fear amongst their enemies and confront The Joker and Gotham City’s most notorious villains, including Harley Quinn, Bane, Killer Croc, Poison Ivy and Scarecrow, who have taken over the asylum.

Batman: Arkham City is Rocksteady Studios’ 2011 follow-up to Batman: Arkham Asylum. The game builds upon the intense, atmospheric foundation of Batman: Arkham Asylum, sending players soaring through the expansive Arkham City – the maximum security “home” for all of Gotham City’s thugs, gangsters and insane criminal masterminds. Featuring an incredible Rogues Gallery of Gotham City’s most dangerous criminals including Catwoman, The Joker, The Riddler, Two-Face, Harley Quinn, The Penguin, Mr. Freeze and many others, the game allows players to experience what it feels like to be The Dark Knight and deliver justice to those confined within Arkham City.

The games arrive on July 26 through the Batman: Return to Arkham bundle, which will cost $50/€50/£40 depending on your local equivalent. The original two games were powered by Unreal Engine 3, but it’s now known that the remasters were remade using Unreal Engine 4, perhaps bringing with it new design features that will push the graphical fidelity beyond the bump to a full 1080p resolution. Warner Bros. said players can expect “improved graphics” and “upgraded models, environments, lighting, effects, and shaders.”

As the official trailer is quick to point out, both titles received critical claim and earned a score of 92 and 96 respectively. While some may be disappointed that the bundle doesn’t include the Arkham Origins title from 2013 but fans of the games are surely going to be pleased with the bundle. Releasing in July, this will surely be a good one to sink some time into come Summer.

What Happens To The Batman Arkham Series After Arkham Knight?
May 25, 2015