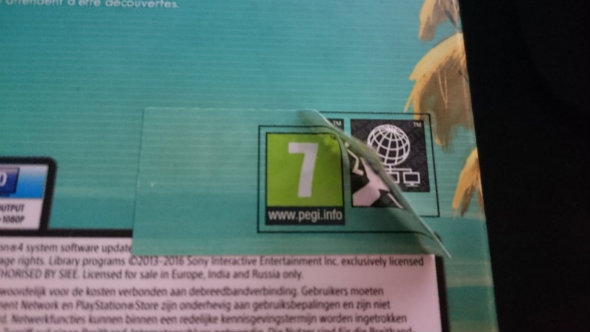 No Man’s Sky is shrouded in yet another controversy as users in Europe have uncovered a flimsy attempt to cover-up an online play icon on No Man’s Sky box arts. The vagueness surrounding No Man’s Sky has been both its gift and its curse, but now many are challenging pieces of information provided by Sean Murray in various interviews over the years in which he repeatedly says there is some limited form of online play; something two streamers in the exact same location recently debunked when they couldn’t see or interact with one another. Multiple users who bought the limited edition version in EU territories have pointed out the same cover-up so it does seem to be a widespread incident.

PCgamesn had some interesting information posted on their website gathered from their sources who had these copies of No Man’s Sky out in the wild.

“It looks like the game was originally getting a PEGI 12 rating, possibly thanks to those online features, but the new sticker rates the game as PEGI 7. Standard versions of the game don’t have the sticker, suggesting this was a last minute change – after all, the standard box sleeves would have been much simpler, and cheaper, to replace.”

The PR from Sean Murray, Hello Games and Sony has been shameful for No Man’s Sky. My personal take on this is that the mysterious vagueness angle they were working in the build-up to the game was a good way of driving hype for the game but they’ve failed to clarify things even after the official release and many gamers feel like that hype-train has crashed on them.

What’s your view on this? Let us know by leaving a comment below.