Earlier this month, a pair of ratings for the Assassin’s Creed Ezio Collection shed light on the rumour that Ubisoft’s action-adventure games starring Ezio Auditore da Firenze are coming to PlayStation 4 and Xbox One in an all-new collection.

The ratings were r posted to Korea’s Game Rating and Administration Committee and picked up by NeoGAF. While the ratings don’t have much in the way of specifics, an Ezio Collection could potentially include games such as Assassin’s Creed 2, Assassin’s Creed: Brotherhood and Assassin’s Creed: Revelations. Those three titles all featured Ezio as a primary character and were released for PlayStation 3, Windows PC and Xbox 360. Ezio also starred in Assassin’s Creed 2: Discovery, a Nintendo DS and iOS game.

Now, French blog gameblog.fr has posted some additional details and even some promotional materials:

This collection will offer 3 games of the trilogy Ezio, namely Assassin’s Creed II, Brotherhood and Revelations in 1080p and 30 frames / sec. The textures have been reworked and the pack include all the DLC and the two animated films released around the story of Ezio. 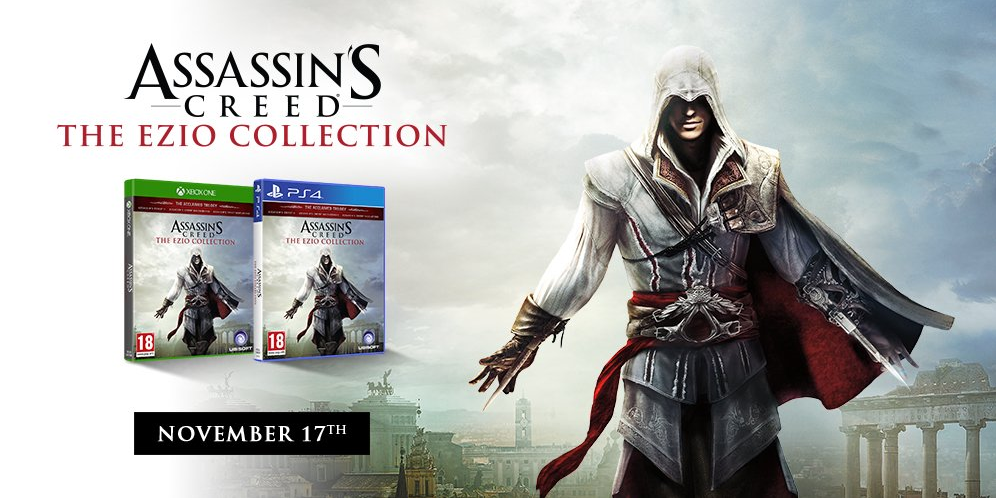 Assassin’s Creed: The Ezio Collection Coming To Xbox One And PS4 On November 17
September 13, 2016