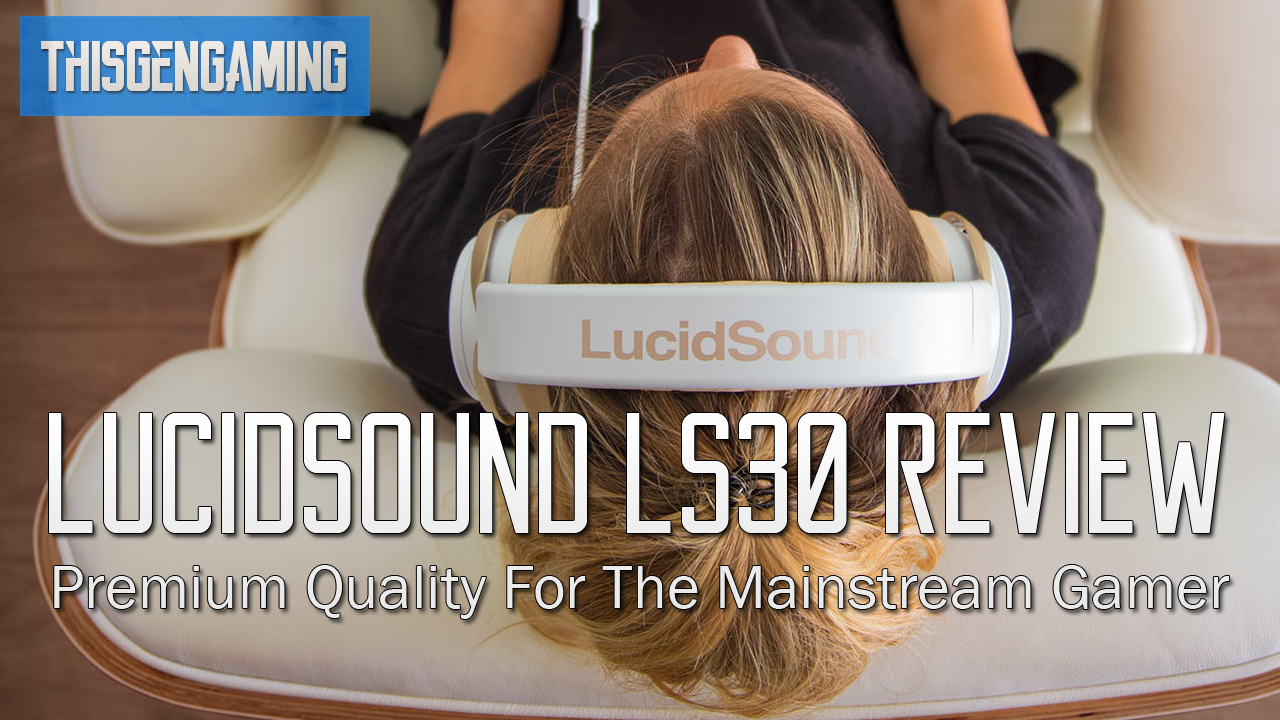 Let’s confront this issue directly – I can’t be the only one that’s tired of the trend in gaming headsets where all the competing manufacturers try to go above one another with excessive sci-fi-like build designs. Put frankly, I’ve grown tired of this design trend in gaming headset manufacturing but that was up until I saw what LucidSound were offering. Thankfully, LucidSound is bucking that trend and going for something that exudes quality and for a mainstream appeal.

It doesn’t look like a ‘traditional’ gaming headset but that’s only because our idea of gaming headsets is currently derived from what was previously available on the market and the sci-fi-like designs I previously mentioned. But, how comfortable would you feel wearing one of those gaming headsets in public?

I can’t speak for anyone but my own personal experience and I know that I always resort to taking my more modestly designed headsets when I go out, even if they don’t perform as well. This is the direction for LucidSound, their premiere headset named the LS30 will remind you of Beats headphones more so than any gaming headset you have ever used.

The originality behind the LS30 and its philosophy is that it aims to encapsulate that same premium quality we have come to expect from the top-of-the-range gaming headsets whilst encasing that same technology in a shell that instantly exudes a sense of luxury and mainstream appeal. There’s one thing that occurred to me soon after opening the box and that was that I would have no problem with wearing these out in public. In fact, I specifically wanted to just to show them off to my friends.

In terms of set-up, the LS30 is delightfully simple to set-up when using wirelessly. For the purposes of testing, I did use an Xbox One home console with the LS30 wireless dongle and set-up was a breeze. It’s a simple case of syncing the headset to the adapter and then enjoying the full range of features the LS30 has to offer.

When LucidSound advertises this pair of headsets as universal, I can assure you they aren’t kidding. You get a range of wires (e.g. 3.5mm) to use with other devices so the LS30 can be your go-to headset on Xbox, PlayStation, PC, Mobile, Tablet and basically any device you happen to use. This is excellent and adds a lot of value for people who want a headset that can do a little bit of everything and isn’t limited to one device or another.

Perhaps the most nuanced and yet outstanding feature of the LS30 was its controls. The LS30 headset boasts simple, intuitive controls to adjust the most commonly used features including game volume, game mute, chat volume, and microphone mute. Most headsets, in fact, all headsets I have used in the past often frustrated me when adjusting volume in-game since I had to fiddle around for a tiny button to change volume up-and-down and during an intense gameplay session, this was always a source of frustration.

With the LS30’s and it’s the sort of design that has me thinking “why didn’t anyone think of this before?” since each ear cup has an elegant integrated control wheel and centre button for simple and easy-to-find controls and adjusting the controls just feels natural in a way a headset has yet to pull off, well, that is until I used the LS30s. The LS30 is designed in such a way that you simply use your hands and you can easily find and control the most frequently used features without the annoyance that you endured with other headsets. Let’s talk about what is perhaps one of the most vital aspects of buying a gaming headset: how comfortable is it? You can rest safe in the knowledge that the LS30 will not cause any fatigue no matter how extended the gameplay session. The headset uses memory foam ear cushions that mold to your ears and ensure maximum comfort. Even the padding on the headband is stitched in such a manner that it is both extremely comfortable whilst also being incredibly stylish. I spent 6+ hours in one single session and even longer with breaks during a single day and, to my surprise, I experienced zero fatigue whilst using the LS30 headset.

So, how does battery life hold up? It’s hard to say because the headset hasn’t died on me yet. The headset charges via micro usb and, since it can be charged from the Xbox or PlayStation itself, I often leave it to charge overnight. For testing purposes, I put the headset through extensive sessions and it has never run out of battery in my sessions so it’s safe to say the battery life is quite excellent for this piece of kit.

The sound itself is impeccable. Now, you can obviously get better and louder for audiophiles who are willing to spend a lot more on a headset but LucidSound’s LS30 does a marvellous job at bringing a premium sound quality to an affordable piece of kit. The headset also boasts three EQ Modes which allow you to customize the sound output to your preference. Personally, I stick with the second EQ mode (bass boost) which gives the headset a little more rumble. It’s worth stressing that the LS30 uses advanced 2.4GHz uncompressed wireless technology to power the headset and this means you get uncompressed audio with zero interference – this is how the developers intended for you to hear their game. Mic quality is near-flawless and the best thing to say here is that the LS30 is actually packed with two microphones. The headset has a built-in integrated mic that’s perfect for less-intense gaming sessions or taking calls whilst on the go. When you want a more serious mic, the LS30 includes a flexible boom mic for intense online gameplay; the distinctive blue LED indicates when muted. An interesting and surprisingly useful feature is the built-in mic monitoring that lets you hear your own voice.

Ultimately, if you have ever found yourself frustrated with the over-the-top sci-fi designs of 99% of gaming headsets then the LS30 is made for YOU. LucidSound’s headset combines the performance of the best gaming headsets around but encapsulates this with a headset that looks and feels premium whilst also having mainstream appeal. The sound is crisp and packs enough oomph that you can become fully immersed in any game you’re playing. If you need a new headset or you’re out to replace an old one, you can’t go wrong with the LS30.

LucidSound is a relatively new player in the gaming headset market so here is a brief history lesson on their roots:

LucidSound is practically a start-up company, based in San Diego and everyone at Lucid came from a gaming audio background. The company was founded by the guys who started TRITTON and members of the Lucid team who came from Turtle Beach and Mad Catz also, all coming together to build a better headset. Lucid also tune all the audio themselves. Lucid has in-house audio engineers with over 20 years of gaming audio experience. Their aim was to build something beautiful, with great, best-in-class audio and discrete controls that are made for gamers but could be used ANYWHERE. – they’ve succeeded.

Availability: Consumers can locate where to buy the LS30 now at lucidsound.com

LS20: The LS20 is a new category of gaming headset, bridging the gap of high-fidelity audio and advanced gaming control, addressing the needs of the everyday gamer. Compact enough to be truly portable, large enough to be truly powerful, the LS20 is sleek, discrete and remarkably adept at rising to the challenge of any and all audio environments. Featuring Active and Passive modes, the LS20 features a built-in rechargeable battery, providing powered amplification when used with console, PC/MAC, or mobile, yet working perfectly as a regular wired headset when the battery is powered down.