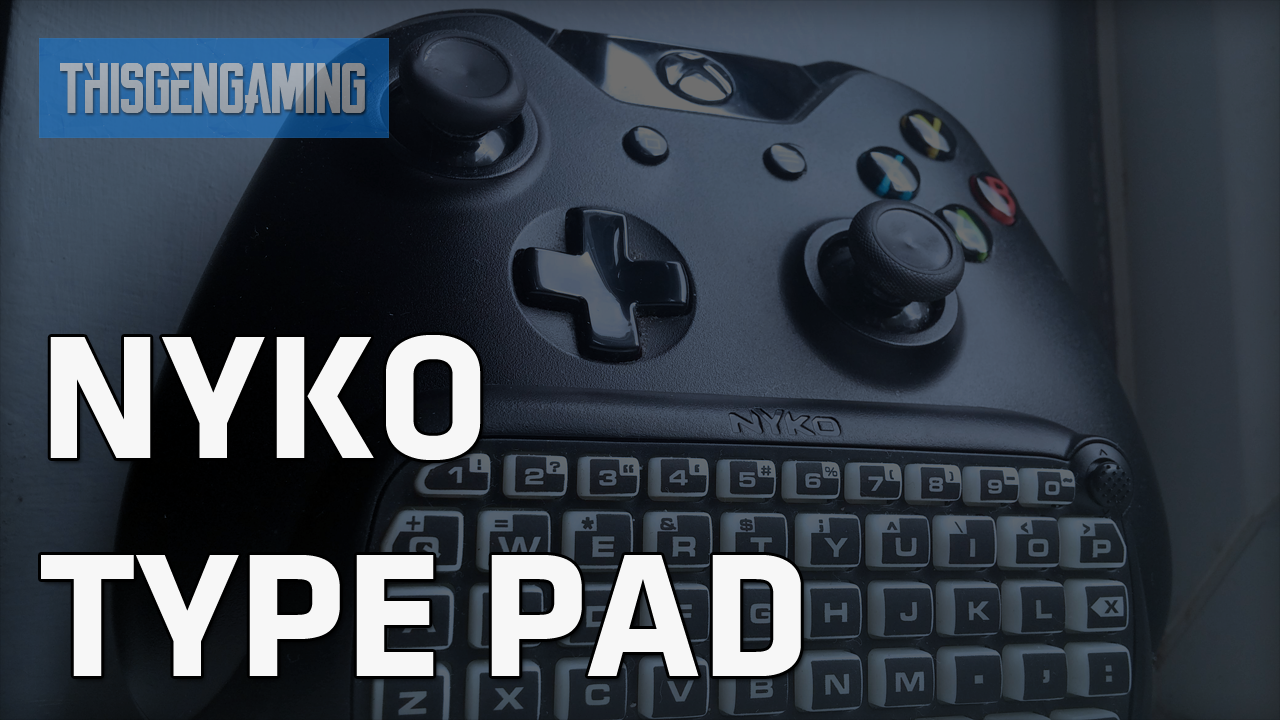 When it comes to PC gaming, typing messages or commands via keyboard is almost like second nature in most games. On consoles, however, communication is largely dominated by voice chat or the “party” chat system. With the current-gen consoles reverting back to PC-like architecture, it only fits then that more PC-oriented games have made the leap to console; one major obstacle stands in the way of enjoying these games as intended – communication.

Of these genres usually reserved for PC games, MMOs or MMORPGs, in particular, stand-out as the genre of game that can have difficulty translating to console users. After all, a console controller can only do so much. This is where third party providers come in. Nyko’s attempt at overcoming this obstacle is through the use of their Type Pad, a portable keyboard if you will that aims to solve the issue of communication where text-based communication is required.

Setting-up the Type Pad for the Xbox One, which is the version I tested, was as simple as one could hope for in a product. The Xbox One controller has a unique port on the bottom for accessories such as headsets and the Nyko Type Pad slides right in. Further, the type pad has a very solid feel when attached and is sturdy enough that it won’t come loose by accident. It’s a wholly wireless device so connecting to the Xbox One is done via a small USB dongle

Nyko’s type pad boasts a full QWERTY keyboard that also has increased functionality via the inclusion of a standalone “.com” button as well as a dedicated “@” which increases the usefulness of the product when carrying out tasks on your console such as web browsing. The keyboard as a whole can easily be used with both thumbs and I found typing out messages or text inputs to be very fast indeed.

The Type Pad also features a special analog nub which essentially serves as a mouse pointer and although I was skeptical and dubious as to why it was included on the type pad, I actually found myself using it fairly often, especially so when browsing the web. In fact, it felt intuitive to have it there since all navigation and typing can be done from the type pad itself.

The keys themselves are large enough that it’s very clear to see what it is you’re typing. Incidentally, the keypad features a special phosphorescent material allows the keys glow green in the dark. If you’re still playing long into the night, as I often do, then this actually becomes a very welcome feature that serves a purpose beyond what I thought to be its initial triviality. The type pad is also powered by the controller which thankfully means that no batteries or charging is required.

It’s a delight to see Nyko’s ergonomic design once again conforming to the original style and aesthetic of the console hardware and accessories. Nyko’s Type Pad features a small and compact design which fits sleekly with the controller’s natural design. There’s nothing overly flashy about it but it conforms to the Xbox One design aesthetic and that’s all it needs to do.

When we reviewed Nyko’s Light Grip for Xbox One, we had to knock a few points off for the accessory not allowing one to use a headset whilst using it but I was pleased to find out that the type pad does away with this issue. Not only does it allow you to use the old Xbox One headset input, but it also allows one to use a 3.5mm headset jack and, in that way, functions as a headset adapter as well as a type pad. That’s right, the collapsible 3.5″ headphone jack and proprietary headset pass-through port enable compatibility with both original and newer versions of Xbox One wireless controllers.

Nyko Type Pad for Xbox One (also available for the PS4)