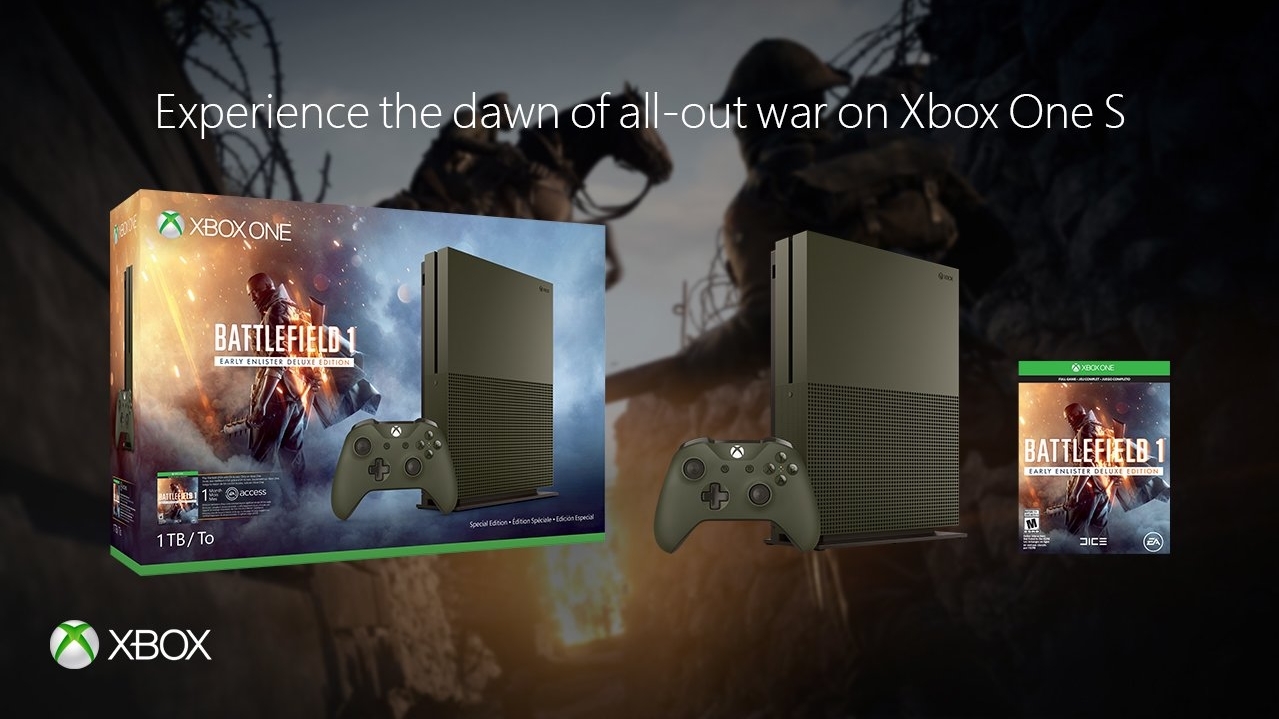 You can play over 100 console exclusives on the highly-anticipated and newly designed Xbox One S, which features 4K video streaming and High Dynamic Range (HDR) support for video and gaming and is the only console with a 4K UHD Blu-ray player. With all the biggest blockbusters this year, plus a growing catalog of Xbox 360 backward compatible titles and the fastest and most reliable multiplayer network, Xbox One S is the ultimate games and 4K entertainment system.

RT if you love the look of the brand new @Battlefield Xbox One S 💚 pic.twitter.com/n1vm29ZYKf

For the ultimate experience only on Xbox, fans in the U.S., Canada, Australia, New Zealand, and Europe can pre-order the Xbox One S Battlefield 1 Special Edition Bundle (1TB), which features a military green console with matching stand and controller, a full-game download* of Battlefield 1 Early Enlister Deluxe Edition, the Hellfighter Pack, Red Baron Pack, Lawrence of Arabia Pack, a new visual appearance of the Behemoths, five Battlepacks and one month of EA Access all for $349 USD. The Xbox One S Battlefield 1 Special Edition Bundle (1TB) will be available in U.S., Canada, Australia, and New Zealand starting October 18 and in Europe starting October 13. As always, bundle availability and pricing varies by region, so please check with your local retailer for more information.

With all the Battlefield 1 bundles, you get one month of EA Access which lets you play EA games for a limited time before they’re released and get unlimited access to The Vault, a growing collection of EA’s best Xbox One games, exclusively on Xbox One.

Head to your local Microsoft Store, microsoftstore.com or your favorite video game retailer and pre-order an Xbox One S Battlefield 1 Bundle today!