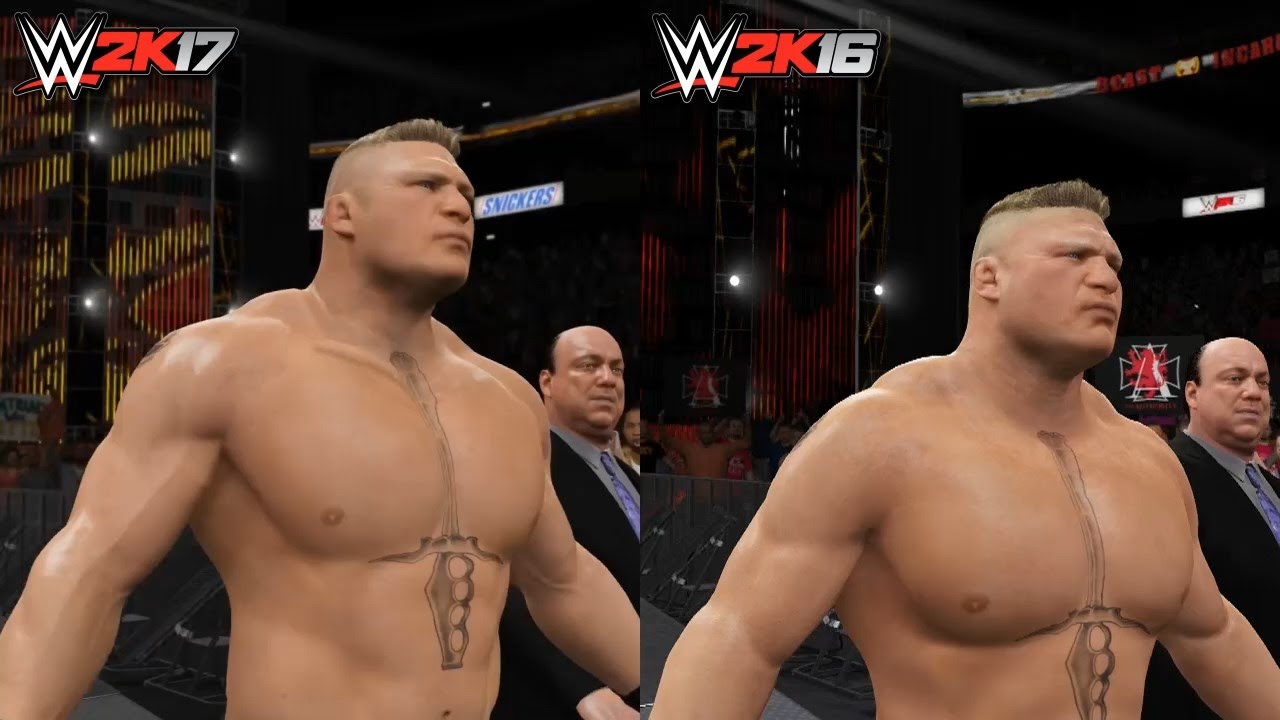 It’s that time of year again where true WWE fans come together to enjoy another amazing WWE Game Launch. Though 2K16 was an amazing game in its own right. Between absolutely beautiful graphics and creation options. The producers of 2K gaming really pushed the envelope with WWE 2K17. Not only is the character roster even larger then before, but they brought back Goldberg! Need we say more! But surely increasing the roster doesn’t make the game better. Let’s compare the difference and see if WWE will amaze us fans again this year!

While WWE 2K16 offered very nice graphics compared to its prior title, 2K producers really stepped it up a notch with WWE 2K17. It now offers updated graphics are out of this world. Extremely detailed and more realistic than every before. Side by side comparison of the two shows that WWE 2K17 offers much deeper character design, lighting, and even sweat on each individual superstar.

One thing that many people look forward to is the amazing entrances. WWE 2K16 did have pretty good entrances, though they did lack in detail in some areas. WWE 2K17 superstar entrances (both male and female) are not only redone, but far more realistic and detailed than every before. Anyone who watches WWE weekly will now see the clear difference between the two games as 2K17 has made some serious changes in making this gamers feel “That Moment” more and more. Where your character comes out and you can feel the excitement as if you were there.

The biggest difference and change of all is the immensely deep character design in the “Creation Mode”. This is where it all counts. What we all look forward to. Is creating our own WWE Superstar (both male and female) and raising through the ranks to become legends! WWE 2K16 had its ups and downs in this field. But the new 2K17 offers so much more then ever before. Such as creating a Video, Creating A Highlight Reply, and Create A Victory. They also updated their Create A Championship and Create An Arena that offers deep creation options that challenges it’s players to put their time and effort into each character and item design!

We all remember those great moments in WWE 2K16 Career Mode. But in WWE 2K17 has brought pain to the name of the game! Offering a brand new “Promo Mode” that wasn’t in WWE 2K16. Not only do you get to choose your path in the WWE Universe. But with this new style gameplay, you get the chance to “Smack talk” other WWE Superstars. But choose your words carefully…..as it can cause those around you to act and behavior differently based on your actions! Make your own alliance…..or form unknown rivals.

To add icing to this amazing cake already. Ever get tired of being confined to that damnable ring and arena…well no longer with the new “Back Stage Brawl” and “Crowd Fighting”! Not only are you able to take this fight from the arena to the Back Stage! But you are able to bring the fight “To The People” literally! These amazing new features not only allow you to take fight to new heights. But WWE also added “Extreme Damage”. This amazing yet brutal new addition allows you to see the damage being delt to your opponent’s! Will you follow the road of John Cena and be the people’s champ? Or will you take this opportunity to let your extreme side out and unleash hell on your enemies like the viper Randy Orton?!

All and all WWE 2k16 was a great game, but now we are counting down to the arrival of the newer, more powerful WWE 2K17! Bring your A Game my fellow gamers….because things just got real!

Oh did I forget to mention, pre-order your copy today to get the amazing, legend Bill Goldberg himself! Including a new WWE look along with his classic WCW attire. And if that wasn’t enough, P. Diddy…..yes the big man himself handled the entire sound track for 2K17. Enjoy a star-studded soundtrack featuring the top names in the music industry, such as Twenty One Pilots, French Montana and Black Sabbath, curated by Executive Soundtrack P. Diddy himself!

Pre-order your copy now and begin the count down to you chance to became the greatest of all time!