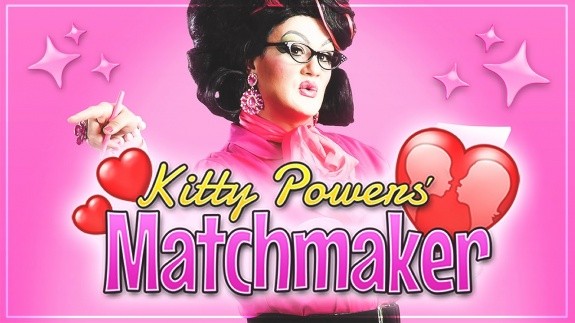 Were you ever one of those people who had to play matchmaker between some friends of yours in school? Well now you can do it virtually on your PlayStation 4 as the mobile game Kitty Powers’ Matchmaker has made its way to consoles. Developer Magic Notion wants you to join up with the drag queen diva Kitty Powers to bring some lucky people out there together and hopefully find the love of their life. While this relationship maker simulator can be fun at times it also quickly gets just as old as that ex girlfriend. You are now in charge of running Kitty’s dating agency and bringing together all types of different people to find love. You’ll create your own avatar either male or female and can choose from some customization options and such. You’ll also be asked some personality questions to help fill out the different areas of your character. All of this is done because if enabled your avatar can then show up in other players games as a possible dating candidate but more on that later. As soon as you enter the agency the game will randomly generate some customers who are in the market for love. They will describe themselves to you and give you all kinds of details about their interests. Each person has a type such as Edgy, Glam, Nerdy, etc as well as other things that make them who they are like their job, what color eyes/hair they like on someone, what sex they are looking for and so on. The game doesn’t discriminate so you’ll have straight, gay, and bisexual customers coming to you for dating assistance. So after you learn what your customer is looking for you then have to look in Kitty’s black book for possible candidates. It will give you so many to choose from and your job is to look at the information listed and choose who you think has the best chance of being the perfect match. Looking at things they have in common is important but you can also sometimes make it work even when they don’t share any interests. After picking a he or she candidate you’ll proceed towards the date. You’ll have to pick a restaurant to eat at which is done randomly as the game shuffles them up. You then play through several stages of the date and will encounter different scenarios that you’ll have to make choices. You want to do everything you can to get affection points out of the candidate. If they ask for a cold dish with no meat make sure it’s cold and has no meat otherwise you’ll get negative points that will go towards ruining your chances.  You’ll ask each other how you like the others hair, clothes, makeup, job, etc. All of these things are chances to become closer or further apart. Other things that can happen include mini games where you’ll have three tries to pick a random match to tell a story or you’ll have to remember a sequence or desserts. Then there are the things that I felt weren’t really fair and those were the mini games that are left all up to luck. You may have to fart and have to play a game where you predict whether the next playing card drawn is higher or lower then the visible one. Mess up and your customer won’t be able to hold it and will let out a nauseous fume of gas. Then there is the wheel that spins when you want to tell a lie. If it lands on a red space you’ll be caught lying but if it lands on a green you’ll get away with it. To me these mini games of chance just never felt fair and they frequently played a part in my date getting ruined.

The gameplay loop pretty much follows this same pattern for everyone. There is no other kind of date other then going out to eat so you’ll be doing the same thing over and over. It is addictive at first as it’s rewarding when you do match two people together but over time the shallowness of the game starts to show. It really ended up being something I couldn’t play in long bursts and maybe that was the point as it was originally a mobile game. It just doesn’t work as well on console. Also I want to point out that the price difference between the mobile version and console version makes no sense and it really has no business being around $10 more on console. Now when you successfully get two people to fall in love you’ll get XP that will level you up as well as reputation points that will make better people come to you. Leveling up allows you to unlock new personality traits in customers, new black book pages, new restaurants, and new ways to fix your customer up before their date. All of these things are done using coins you are rewarded with after each date. I did appreciate how there kept being something to work towards. Now I mentioned you make two people fall in love in all sorts of ways. One of those is by telling those lies but in the end I found that isn’t worth it. That is because after you make a pair you will then receive a letter in the mail later on telling you how their future went. If they told lies during their date the relationship usually failed and ended up costing me a ton of reputation points. On the other hand if they turned out happy you may find they got married or had babies which will reward you with reputation points. The game has some nice cheeky humor to it with the written dialogue and yes even the farting noises. But like the gameplay loop itself even that gets old over time as you’ll be reading some of the same things over and over. It’s got bright, colorful cartoon graphics which is a perfect match for this game. If you like trophies the game has over 30 of them for things like getting all of the food tips to matching certain types with another. You’ll be putting in some time if you want to unlock them all. The question is will you be able to stick with it that long?

I have to say for a dating simulator I was rather surprised how addictive it was at least for a short while. Kitty Powers’ Matchmaker is different from mostly anything else I’ve played on PlayStation 4. It’s got charm, humor, fun, love, but just doesn’t have that long lasting relationship material in it. The gameplay gets old after a couple hours and I just can’t help but feel it isn’t worth the current console price tag. If you catch it on sale in the future and want to indulge in some fun consider hooking up with this game.