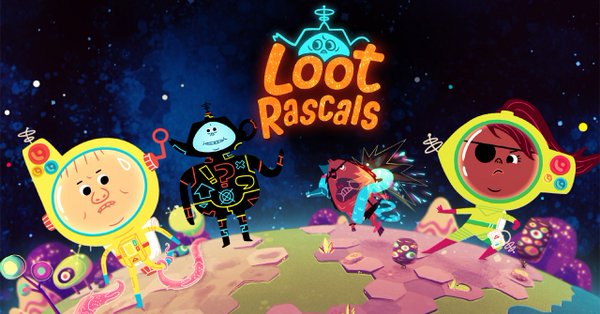 Indie team Hollow Pond are no strangers to creating games that are quirky and a little bit different from the norm. You might have played another game called Hohokum that released on PlayStation platforms a couple years ago and was later on PlayStation Plus. That game was different from just about anything else out there for sure but now they have a new game coming out very soon. That game is Loot Rascals, a new roguelike that uses procedural generation to switch things up every run. Loot Rascals does a lot of interesting things but some design choices ended up resulting in me not enjoying this game as much as I thought I would. One of the things you’ll notice first upon starting the game is the striking art style and color palette that Loot Rascals employs. It really looks like a cartoon from Nickelodeon or Cartoon Network. You play as a cute little spaceman (or woman) who has crash landed on a planet and you’ll have to fight all kinds of strange and interestingly designed enemies while you try to escape. Now Loot Rascals is kind of a mix of a whole bunch of games. It is a roguelike but you play on a grid based map and it has elements of a turn based game as well. Did I mention the card collecting element? So to explain you have to play through five worlds to reach the end. Each world is made up of a grid based hexagon map but you don’t move your character along them like a playing piece. Instead you have full control at all times of your movement and as you walk around a turn counter in the top right counts down. Every hexagon you move to counts as a turn. There are enemies on the map that operate on a day/night cycle and that cycle changes every 5 turns. Attacking enemies during the day or night can mean the difference between getting to attack first or second.

Each of the five worlds is randomly generated and the goal is to find the portal on each map that will teleport you to the next. You start off in a safe area called a dome which you can come back to to restore your health for a price or to take on quests. Quests usually consist of killing a certain enemy to get a card that you then take back to a guy in the dome for a reward. Enemies can’t attack you here so it isn’t a bad idea to retreat back here if you are hurting. However you can’t take too long trying to find the exit as after so many turns Corpse enemies will spawn on the map and make your goal harder. These range from Corpse Mites first and lead up to Space Death that you’ll pretty much not have any chance of beating. I really didn’t like this system much and it ends up hurting the game in my opinion especially when you factor in the luck factor that I’ll go into below. Now to fight anything you’ll need to collect cards from defeated enemies. You start off with just a few attack and defense points and five points for health. Every enemy you beat has a chance to drop a card. These cards you can then equip to boost your attack and defense stats. You can equip 10 at a time with 5 in a top row and 5 in a bottom row. This card system has more depth though as some cards can give bonus stats if certain requirements are met. One card may have +1 to attack but may become +3 if you place it in a odd or even spot in your card column. Other cards may cause the card above or below them in the column to become zero. You really have to pay attention and plan what cards you equip and where you equip them. Do you focus more on boosting your attack or defense? The choice is yours. There are other cards that you can equip on another card that will give that card a special power like being able to heal a few points of your health, light an enemy on fire, freeze an enemy and more. Then you have the really powerful cards that can give you big boosts like the ability to combine all your cards into a single one giving you a massive increase to your attack and defense. It’s a really cool system and a lot of fun to mess around with but it also is a little bit unfair. Since you aren’t guaranteed a card to drop when you beat an enemy powering up your character feels like it relies too heavily on luck. Some runs I got really lucky and ended up strong really fast. Another time I started a run and found that cards weren’t dropping frequently enough leaving me at a disadvantage. Some runs the enemies you encounter right away have only a few health and the next run you run into enemies that have a ton of health giving you almost no chance of beating them since you haven’t been able to find any cards yet. It just feels a little unbalanced and too reliant on luck and makes some runs just feel pointless.

Loot Rascals also has a pretty cool online feature. Should you die in the game you will lose a random card to the enemy who beat you. Should that enemy show up in another players game and they beat them they will drop that card it stole from you. It is then up to the player to send that card back to you or to keep it for them-self. If you return the card you might end up running into a hologram of that player who will then help you. However if you keep it you could end up getting attacked instead. The game also has leaderboards and a daily challenge mode for you to compete against other players. It also has 22 trophies in total including a Platinum. I really liked a lot of things about Loot Rascals but it’s just a shame that luck plays a factor too often. The art style is colorful and charming, the gameplay is easy to learn but has a lot of depth to it along with player freedom and the procedural generation keeps things fresh. The whole card system is really cool but I just found myself getting frustrated that they weren’t dropping often enough to give me a chance of making it to the next level. The time limit on turns makes it so you can’t even work as long as you might need to powering yourself up to give you a fair shot as well. I really think Hollow Pond did mostly right here but some refinements could be made to make Loot Rascals really special.