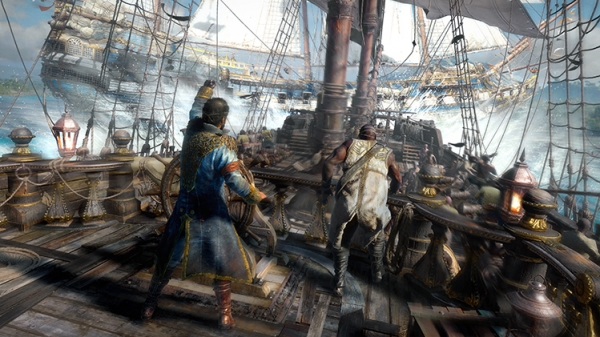 At E3 2017 Ubisoft announced they are making a new Pirate IP called Skull & Bones. The game will be coming to the PS4, Xbox One, and PC in Fall 2018. Check the trailers out below.

Right around the time that players boarded the Jackdaw as Edward Kenway in Assassin’s Creed IV: Black Flag, the team at Ubisoft Singapore was running an experiment. Having played a big part in creating the pirate world of Black Flag, they wanted to see what their naval combat would be like with two player captains in the mix. According to producer Arnaud Vaudour, the results were inspiring. “That very simple experience, with nothing else, just two ships that you put together on the ocean with all that firepower… We already knew that something great could come out of that.”

That experiment became the seed for Skull & Bones. Set across the diverse cultural seascape of the Indian Ocean, Skull & Bones challenges you to rise from upstart captain to pirate kingpin by commanding your own warship and amassing a fortune as you prey on merchant convoys, rival pirates, and, of course, other players. But how does this pirate fantasy differ from those that came before it? What combat changes are taking place to evolve single-player systems into a multiplayer experience? And where does your journey to the top even begin?

Get Ready to Sail

It begins with a boat. Though you’ll eventually have multiple warships in your fleet to choose from, you start with just one. But this is no mere sailing vessel.

“Pirate ships are the biggest and most deadly vehicles on the earth at this time,” says Bill Money, game director at Ubisoft Singapore. It’s a statement you can see clearly realized in the ship design. The bustling deck of the Jackdaw feels calm in comparison to the hive of activity on a Skull & Bones warship. Crew members scurry about handling tasks and manning posts, while ropes and lanterns swing to and fro beneath the tapestry of sails fluttering overheard. The ship feels alive, and if you sail up next to an ally, you’ll see their ship looks similarly lively, but noticeably different. Customization is an important part of building a name for yourself in Skull & Bones.

As you successfully plunder your quarry and gather riches, you’ll begin to tailor your ship to your liking. Some of these changes will be cosmetic, enabling you to flaunt your success or strike fear into the hearts of your enemies. Speaking from personal experience, when you see a large golden skull adorning the stern of an enemy ship in a multiplayer match, you definitely sit up and take notice.

Observing other ships won’t just give you an idea of how rich that player might be, it will also convey valuable information about the ship’s capabilities. Warships in Skull & Bones are grouped into classes inspired by role-playing games. There are three classes to choose from in Loot Hunt, the 5v5 PvP multiplayer mode being shown at E3, but more are planned for launch and beyond. Learning to recognize ships at a glance, or scouting them from the crow’s nest, is key to planning a successful raid.

Spot a large warship teeming with sails and riddled with multiple long rows of cannon ports? That’s the Frigate, a heavy-hitter that can deal massive damage in close quarters and take a lot of punishment, making it ideal for shielding weaker ships from enemy cannonades. Notice a vicious-looking wedge protruding from the prow of a mid-sized vessel? Beware the Brigantine, a swift raider that would love nothing more than to close distance, ram your hull, and finish you off with a boarding party. Spy a few sails on the fringes of the battle and wonder where the explosions on your deck are coming from? You’re probably being shelled by the long nines of Sloop-of-war, the lightest of the three classes that excels at dealing long-range damage. If you can tear your eyes away from the gorgeous azure ocean and verdant islands, you can learn a lot about your enemy before you engage.

Once you know what you’re up against, it’s time to plan your attack. Your ship’s arsenal is where customization takes a strategic turn as you decide what your combat tactics will be and plan your loadout accordingly. Figuring out ways to improve your firepower is one of the many undertakings you’ll find in the open-world sandbox of Skull & Bones, an area which will present both PvE and PvP opportunities for enterprising pirates.

“You’ll be able to find out what’s being delivered across trade routes, get inside information to help you plan your attacks,” says Money. “Once you’ve learned this info, you can choose to go after targets that are really valuable to you.”

In addition to the threat of rival pirates, the powerful empires and corporations that you prey upon won’t roll over without a fight, and there will be battles that you won’t stand a chance in if you don’t have some friends. Teaming up with other players and forming guilds allows you to pool resources to target big scores, but this too can be a risky proposition. There will be ways to betray your allies in Skull & Bones (this is a pirate game, after all), but the benefits of sailing in in a fleet of complementary ships will likely outweigh the risks.

Striking the right balance is key, especially in the PvP mode we played. In it, five teammates sail into a region known to be traversed by merchant fleets. Sure enough, small ships show up early on and are easy pickings for your team of corsairs. Then come the merchant convoys, packing more firepower but also carrying richer spoils. Here’s where coordination starts to become important; setting up long-range Sloop-of-war bombardment means that the fast Brigantines need only rush in, finish off the weakened ships, grab the loot, and escape behind the cover of a Frigate. These team tactics may seem simple, but they get more complex when the enemy team shows up. In order to get the best of other human players, you’ll have to master one of the most crucial tactical elements of Skull & Bones: the wind.

“The pivotal breakthrough for the experience of navigation and combat in Skull & Bones is using the wind and the ocean itself,” says the game’s creative director, Justin Arden Farren. “Wind is the tactical layer that lays on top of our systemic ocean.” A few minutes with the game, and you can see what he means. My battle tactics were alternately made and broken by the wind, allowing me to outmaneuver an ill-positioned enemy in one encounter and stalling me in place to await a vicious boarding party in another.

“It’s a matter of life or death, mastering the wind,” Farren adds. “If you’re unable to effectively use it, you will die.”
Fortunately, there are a lot of clues to help you get it right. Most prominent among them is the minimap in the corner of the screen, which displays a detailed chart of streaming arrows to help you read nearby currents at a glance. Then there are the sails, snapping to attention when backed by a strong gust and fluttering loosely when not. Ribbons and ropes hanging from the rigging sway with the breeze. Sound cues tell you which ear the wind is blowing into and out of. And your crew themselves are very vocal about how effectively you are using the wind to maneuver the ship.

Wind and weapons are two of the most important tools of the trade in Skull & Bones combat, but there are others to consider as well. You can adjust the sail position to slow down for more precise aiming, and some ships can even anchor and come to a complete stop to gain a damage buff. If you spot a volley like that coming in, you’d do well to brace—a temporary crew position that can seriously reduce the damage you take. Boarding is a daring finishing move that requires proper positioning and timing, but a successful takedown can repair your hull and keep you in the fight.

The array of weapon types and combat abilities can make for some deadly battles, but in the PvP mode we played, the most perilous fighting came right at the end when–after a certain amount of loot had been plundered–the merchant faction sent in their pirate hunters to reclaim their lost assets.

“Our world itself is a systemic, reactive world, and when the player takes action within the world, the world reacts,” says Farren. The pirate hunters are huge and there are a lot of them, but they can’t traverse narrow gaps in nearby reefs. This is the players’ cue to make a daring escape and secure their winnings; only loot successfully extracted counts towards victory. But what if a defiant captain wants to fight back? Farren warns, “I’m not going to say it’s impossible, I’m just saying don’t try to do it by yourself.”

Your pirate life will take you all around the Indian Ocean, through many different environments, and put you in contact with many different cultures. Ubisoft Singapore is keeping details on these locations under wraps, but we’re clamoring to know more, and we’ll let you know when we do. Until then, be sure to watch the videos embedded above for more on Skull & Bones, and check out UbiBlog’s coverage of all the Ubi games being shown at E3.