Most Xbox One gamers had a sceptic reaction to the announcement that the two Disney Kinect games would be remastered (and enhanced for Xbox One X), but I had the opposite response: “I HAVE TO REVIEW THESE!”

I’m a huge Disney fan and so is my little girl, so there is nothing that brings me more joy than playing a videogame that she enjoys playing and watching as well. We already tackled Rush: A Disney Pixar Adventure (and we loved it) so we couldn’t wait to start playing the game that actually lets us walk around Disneyland! As before, I’ll let my daughter, Fé, throw in some feedback every now and then.

Unfortunately I have to start my review with a downer: I had some technical issues with the game right off the bat: it crashed on me twice and the second time I could only start the game again after a full reinstall. If you have a toddler yourself, you know that patience isn’t their strongest virtue, so try telling them to wait an hour before they can watch Mickey and Donald again… Luckily after this reinstall (and I think this also pushed it to update the Xbox One X enhancements) the game ran smoother and I haven’t experienced any crashes since. Though waiting for the reinstall DID give it that authentic Disneyland feel; it was as if we were queuing for an attraction.

…That much is clear, which is why we’re moving on!

There isn’t much of an overarching story, you’re just dropped in Disneyland and the various Disney figures you meet each have tasks for you to complete. Most of which are fairly simple: Get an autograph from Goofy, dress as a pirate, grab 2 glass slippers for Cinderella, go talk to Piglet for Pooh. But he…He’s *RIGHT* there pooh?! Aren’t you on speaking terms anymore?

Fé: “I like how we can hug and dance with Mickey! And Minnie! And Pluto! And Goofy! And…”

Yes, quite. Every time we met a new character, Fé immediately shouted out their name and that she wanted to hug them. For the littlest kids, this part of the game is a perfect fit for them.

For me, the most interesting character to meet was Karen, the park guide. Every time I came across her, she had some interesting tidbits to share about the amusement park and even as a Disney goof, she had some knowledge to part with that I wasn’t aware of yet.

While the looks of the game are certainly adequate, there is a clear difference in quality when compared to Rush (which was a GORGEOUS game, I can’t stress that enough!). Here, models and textures aren’t as detailed, there is some texture pop-in when walking around the world and certain shadows look jagged. When walking around in the park you can often see shadows flickering in and out and some of the characters only seem to load when you get near them. Though this is much less of an issue on the Xbox One X than on the S or Original console.

There are also some clear graphical differences between the different minigames in the game (more on them later). Some of them have lower quality visuals and what looks like a drawn line around your character, while others truly have a fresh style. Like the cardboard effects in It’s a Small World or the shadow play in Pixie Hollow. Fé: “Show them the fairies, daddy! I like fairies! I’m named after ’em too!”

Alright, fine… Here’s the Pixie Hollow minigame where you have to help Fawn tell a story by mimicking their movements:

To come back to evaluating the graphics, however: the game never looked ugly but certain parts of it look dated. While Rush felt like a brand new game that was developed with the Xbox One X hardware in mind, I mostly felt that Disneyland adventures was just a remaster of its Xbox 360 roots. Perhaps I just played both games in the wrong order.

Here’s where the game truly shines, just like was the case with Rush: You immediately notice that all characters are voiced by the proper voice actors and there is a boatload of authentic music in here. The Licensed music was present throughout the park (and the transition of background tunes when going from one area to another felt as if you were in the actual park) and the minigames all had the correct soundtrack you would expect from its movie counterparts.

Hearing Robin William’s voiced Genie (from Aladdin) was even somewhat of an emotional moment for me. He’s always been somewhat of an example for me: Funny (I try to be) and he brought up his daughter while sharing his love for videogames (as I do) – He even named her Zelda.

Playing through the game is like taking a trip down nostalgia lane and at my age, that’s one of the most powerful, intoxicating drugs there is. Music really does trigger the memory like no other sensory input can and I had a wide smile across my face for most of the experience because of it.

There are two main parts to the game, on one end you have the exploration of the park and doing all of the character sidequests. In the first few hours of playing you’ll quickly be granted with several tools that help you unlock collectables: The map has 8 area’s with plenty of hidden stuff

There is a literal TON of things to collect spread across the map, in fact, I haven’t gotten a 100% completion yet and I’m 28 hours in. All of these also get you coins which can be used to spend on autograph books, photo books, collectable pins and clothing for your playable character. Getting these collectables is EXTREMELY addictive as you always have the next one in Eyesight just when you were about ready to turn the game off for the night.

The Hidden Mickeys are the most elusive of these collectables: they are pictures you can take of the famous Mickey Mouse logo. Some of these are deviously well hidden

Luckily I had the perfect help for spotting these, as Fé would usually yell out “Mickey!” before I even noticed myself. I would then stop in my tracks, take out the camera and start looking for it.

Yes, she’s learned how to trick me into looking for a Mickey that wasn’t even there… The little rascal! That said, there are a lot of them I would have never spotted myself! These were the hardest to collect (and I’m still missing a little under half of them) but also the most fun. A lot more fun in fact, than watering a plant and seeing “1/50 flowers watered in this area”.

The second part of the game are the mini-games. These vary in type of gameplay but most of them boil down to:

(You can check all of them on my YouTube channel) Bruce is looking for a snack!

You can clearly see that all of them have been designed with the Kinect in mind, it’s just a shame I haven’t been able to try that out yet as I do have a Kinect, but haven’t bought the adapter yet that is needed to play with it on the Xbox One X.

When controlling them with the controller, you do feel as if your inputs don’t accurately translate to your characters motions on screen. Added to this is that some of the collectables (especially the hidden secrets, which are already the hardest to get) seem to have issues with hitbox detection.

Let it be known that you have to learn to contain your swearing when you’re near your toddler and you’d best avoid playing frustrating games. Luckily the games themselves weren’t frustrating and getting those secrets are in no way required to beat the game. In fact, while I found it hard to play a level perfectly (no misses, perfect timing, getting all coins) that wasn’t even needed to get a 5-star rating on it. It was very forgiving so that should avoid any frustration your kids may have when playing videogames.

All games are wonderfully appropriate for the source material though. In Alice in wonderlands’ attraction, for example, you’ll first have to fall down the rabbit hole, then play croquet with the queen and finally, you’ll dance at the unbirthday tea-party.

Outside of finding all the secrets, there hardly is any challenge to the game at all. Do you need to find the next thing to do? Just follow the trail of pixie dust. Need to talk to another character? They are often within a stone’s throw distance. But that doesn’t mean the game isn’t entertaining: not every game should be challenging or stressfully difficult. Sometimes a game can just be played to entertain yourself or to suit other needs. For me the biggest joy-factor is nostalgia, for my daughter it was interacting with her favourite characters. She wasn’t a big fan of the yetis though.

Added to this is that the game is a joy to play together with your kids: the co-op mode is again a strong suit of the game. You can unlock things together (each with another tool in hand) play the mini-games together (vastly increasing your odds of getting secret mickeys and all of the coins) and just have a blast.

It’s an easy game and there were some minor issues, but if you’re a big Disney fan or if you have kids it’s the perfect game to add to your Xbox One catalog. I can wholeheartedly recommend this title to any gaming parent. I did consider giving a lower score though, considering some of the issues I had while playing it. But in the end, I had tons of fun and my daughter couldn’t get enough of it. Add to this that you’ll easily get more than 30 hours of content out of it if you’re a completionist, which makes Disneyland Adventures a great deal for its asking price. 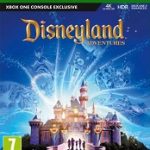