Last week I reviewed North, an incredibly short game that could be beat 100% in about 15 minutes. Today I have a look at One Eyed Kutkh, a game from the same Publisher that seems to have the same business model: sell a short game with an easy 1000G for about $5

Our one eyed alien protagonist crashes his tiny spaceshipon a tiny planet. He’s missing a tiny gear to fix his ship so he sets out on a tiny adventure to fix it. We travel through the planet’s core, fabricate a tiny model out of random junk and this gets a tiny version of this planet’s sun and moon to have a struggle. My Money is on the one with six arms…

Some eskimo-looking fellow is then sent by his people to check out why the sun and the moon have up and left. He ends up trading the missing tiny gear for the tiny UFO the Kutkh had stolen from the sun and moon.

This all takes place in about 25-30 minutes and if you’re anything like me, you’ll be left wondering: What the hecky did I just play?

The one saving grace the game has is the kind of charming artstyle but I strangely grew tired of it before the games’ end. That’s probably because for such a short game a surprising amount of assets and locations where re-used. If a game like Devil May Cry 4 can get ridiculed for having us traverse the same path a second time with another character, then I don’t see why we can’t hold this one to the same criticism. You’ll be here again with the other character in about 10 minutes.

The same repitition is found in the audio department. The same few background music tracks get repeated over and over (and they are in themselves just simple loops). I just have a hard time shaking the feeling that I’m playing a free Flash-based browser game.

It’s a point-and-click game that really only requires about 15 clicks to beat if you don’t count the directional movement. I’m ashamed to admit I even failed to understand how the game worked at first. Take for example the image below. You see the same icons repeated a few times. Our buddy Kutkh has some icons on buttons and levers (that are coincidentally the Playstation’s button icons) and I kept pressing them a few times without really achieving anything. Turns out that you actually have to interact only with the thought-bubble. (which goes against any logic) Square. Triangle. Circle. I thought I was playing this on the Xbox One?

Same goes for the direction you’re going: arrows will appear in thought-bubbles and you click them to go left or right. The entire thing could have easily been replaced with clicking on what’s already visible on the screen (directions, items, characters to interact with)

I think the game may have a very young audience in mind as the puzzle solving is mind-numbingly easy. There is always only one solution to a problem and it’s always blatantly obvious.

One Eyed Kutkh is incredibly short and an experience worth forgetting. In fact, I believe the majority of people who played it immediately deleted it right after to save on storage space. The only reason I could see this do well at all is if enough achievement hunters think the price is worth it for the easy 1000G or platinum trophy. On a platform that is devoid of it, like the Nintendo Switch, I’d recommend to avoid it altogether. You’d get exactly the same enjoyment out of watching the playthrough below. 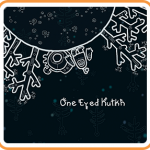