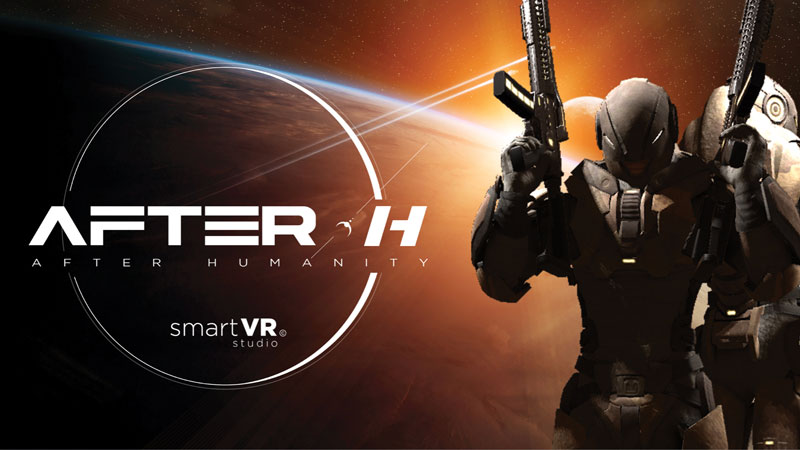 After-H is a First Person VR Shooter with online multiplayer and it envisions a future in which VR-based eSports are all the rage. It’s fast paced and has dense maps for a max of 4-v-4 players to battle it out. We got to test out the Early Access build with some 2-V-2 action to see who takes the lead on the scoreboard. Black vs White; like a game of violence-enabled chess.

First off, I feel I have to address the hardware we used. Instead of using the default HTCVive controllers, we played this game with a VR gun. This particular model offered some slight kickback when firing and came with a multitude of buttons (of which only a few are really important).

You control your in game character through a first person perspective and use the analog stick on the VR Gun to move around. Moving it up or down will let you strafe, if you want to turn you’ll have to physically aim the weapon in that direction. Firing the gun offers a pleasing physical feedback and even reloading feels satisfying as you’ll have to press the button to release the clip (but not really, just in-game) and then use your non-dominant hand to load a new clip. Other than this you only have to concern yourself with the run button and the one that switches your in-game weapon model.

Let there be no doubt that this is the optimal way to experience the game!

After-H is currently only in early access, so you’ll only have two types of weapons to choose from: the default assault rifle and a kind of sniper rifle with only 5 shots. While that’s not a big assortment by any means, it was sufficient to get a good feel for the game. Aiming is precise and it feels great to get a long-distance kill or to get the drop on an enemy from behind and leave a full clip in their spine.

I also appreciated the lack of any in-game HUD cluttering up the corners of the screen. All the info you needed was instead shown on the gun itself with a radar displaying your enemies’ or allies’ locations and a number to indicate how much ammo you had left. As long as your aim is better than a stormtrooper’s, you’re good to go.

Speaking of locating your enemies: it felt especially good to hear an ally call your name and warn you of an opponent creeping up behind you, only for you to turn around and get the drop on them. Communicating well with your teammates is definitely something that could lead to many victories.

Only two maps were available to use, each offering plenty of objects or buildings to hide behind and ample opportunity to get to higher ground without the need to jump (plenty of slopes and staircases are present to move around on). Tactically the maps were well designed, but they could still use a lot of polish when it comes to the visual appeal. Perhaps it’s only the Mars locations that look this brown and dusty, but for now it seems like one the aspects the game should strive to improve on. “Get to high ground to win” – Obi-Wan Kenobi

Technically the game plays like a dream. One of my friends on the opposing team had some issues with firing, but we think it’s more likely his VR gun had a hardware malfunction than that the game itself would be to blame. Sure, it made it easier for my team to win, but in a real war your enemies will also not give you any pity so let’s chalk that one up as realism. 🙂 From what I got to play, After-H provides a smooth online multiplayer experience and I could certainly see it becoming a VR eSports powerhouse if the developer keeps improving the visuals and adding more content. From what I’ve read on their Steam page though, that’s exactly what they have planned:

“The full version of the game will include a large set of weapons, maps, game modes and ingame player and team features. And also a skin system for your avatar. After the official release, we will update the game with new elements on a monthly basis.”

The best part of it all?

“AFTER-H is and will remain Free to Play.”

If you have a VR headset, be sure to check it out. If you don’t, search for a VR center near you and they’re bound to have a playable version.