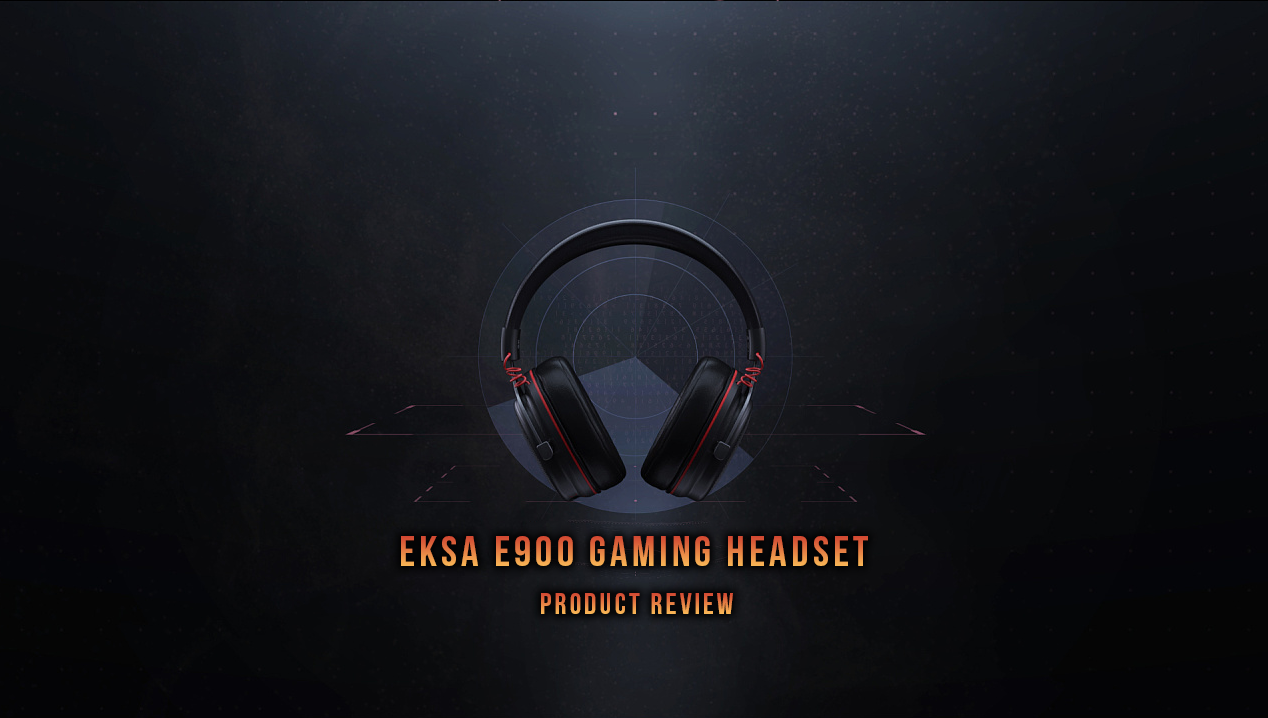 I don’t review gaming hardware/accessories often but I was browsing for a new headset to use at work/when gaming and it just so happened EKSA reached out to me and asked if I’d like to review their new gaming headset.

The EKSA E900 is a budget-friendly wired gaming headset with microphone. A nice touch is that you can choose between the 7.1 USB or 3.5mm Audio jack. But before we get into the specifics on how it performs, let’s just inspect what it looks like.

The packaging, while not very important, is something of a pet peeve of mine: a quality container can do a lot in selling you on how valuable you perceive a product to be. The E900 came in a regular cardboard box and some bubble wrap around the headset itself. I always appreciate it if a headset comes with a carry-on case to protect it from damage while on the road, but that was missing here. Considering the low asking price, I wasn’t really expecting this though. But it never hurts to clarify.

The outside of the headset looks pretty cool. The jetblack colour with the red finishes is a style I can really appreciate myself (it’s a color mix I often gravitate to myself). Unlike some other headset models, I wouldn’t be ashamed wearing this on the go, listening to music as I walk to work.

I can also really appreaciate the brand etched out in the faux-leather on the top. It looks classy and touches like these can really add a bit of oomph to the design.

Gotta get your logo nice and visible!

The padding on the inside of the headrest also makes it really comfortable to wear, even for long sessions. I’ve worn it for a few working days and never gotten “headset-fatigue” from it.

The audio control cable is also nice and lengthy with its 2 meters. There is a Microphone ON/OFF slider that feels nice to use, but the Audio control wheel, while accurate, doesn’t feel very durable and could prove to be a weak element after prolonged use. The control element comes in at just the right place though, around hip height.

The Microphone does the job, but when I tested a few recordings I found the quality to be a bit lower than what I’m used to. It also looks cheap with the bright red plastic cap at the end. The cable itself can be twisted into the desired shape and is the appropriate length.

mic finish looks cheap because of the plastic red cap

The earmuffs are very comfortable as well, but I generally have bad experiences with the material: the fake leather tends to peel off after a while. We’ll see after a year and I’ll update this article when it comes to that.

Something tells me this side is for the Right ear…

All of the jacks are located on the left earpiece. The microphone and 3.5mm jack also have a nice twist-to-lock mechanic incorporated in them. The tactical feel of twisting them into place was oddly satisfying.

My pareidolia is kicking in…

Overall, I like the design of the headset. Some choices have obviously been made with a budget in mind, but this translates directly in the lower price you have to pay as a consumer. It’s comfortable to wear as well, but how does it perform?

After a few days of testing with music, skype chats and playing games I can definitely say it’s up to par as a everyday headset to use. I loaded up a few audio testing files as well to see how much I can push it to its limits:

That last test is also heavily influenced by how much noise cancellation the headphones provide. Sadly, the E900 offers almost zero noise cancellation. If someone is having a conversation in the next room, you will still hear them, even when they don’t raise their voice. If you have kids at home like I do, you won’t be able to ignore them 😀

not that I’d want to ignore this cuty pie…

There is also noticeable noise-bleed coming out of the headset. If you have your volume cranked up, people near you will hear what you’re listening to. Both these issues aren’t too bad if you’re gaming at night with no one around, but during daytime gaming sessions, it can be a hindrance both to yourself and your family members/roommates…

The EKSA 3900 is a good-looking headset that feels very comfortable to wear. Some of the finishing touches could have used a bit of extra attention to detail to make it feel more premium. There is also the issue of noise bleed & having almost none noise cancellation, so it’s best used during private gaming sessions. Audio quality is also pretty good for its low asking price though, and that’s the major selling point!