The third month of 2019 is upon us and Sony and Microsoft have announced their lineup of free titles for their paid gaming subscribers. As always we’re going to compare and contrast these two lineups here. We’ll look at several different areas and compare them such as the price value, how well the games were received by critics, and how old the games are. There has been a change up now as PlayStation Plus appears to be shifting to two games a month versus the previous six so that will change things.

Keep in mind this is just our opinion on which is better for the month as every person has different tastes and may like certain games better than others. Which is better in March? Let’s find out.

Games with Gold is offering four titles as always with two on Xbox One, one on Xbox 360, and one original Xbox game. As always you can play the Xbox 360 games and Xbox games on your Xbox One thanks to backward compatibility. On the Xbox One you get both Plants vs. Zombies: Garden Warfare 2 and Adventure Time: Pirates of the Enchiridion for free. On the Xbox 360 you get Metal Gear Rising: Revengeance and on the original Xbox you get Star Wars: Republic Commando. Now let’s look at what the games are worth.

Adventure Time: Pirates of the Enchiridion – $39.99

So looking at the lineup you get $90 worth of free games in March which is the exact same value that was offered in February. Adventure Time is the biggest value here being priced at $40. The rest are either $20 or $10 so overall not bad for the month of March. Now let’s look at the PlayStation Plus lineup.

In March, PlayStation Plus members are getting two games for free. This is because PlayStation 3 and PlayStation Vita games are no longer offered as part of the service. February’s games on those platforms are still available for a few extra days in March so you can go grab them if you haven’t yet. On the PlayStation 4 both Call of Duty: Modern Warfare Remastered and The Witness are free. Now let’s look at the price values.

So for the third month of 2019 you are getting a total of $80 in value which is down from the $143 you got in February. That’s a huge drop from last month and understandable given that only two games are factored in now compared to the six we’ve been use to. It’s still more than what you pay for a year of PlayStation Plus so despite only being two games you are still getting good value.

So when comparing both lineups, Games with Gold wins with a $90-$80 difference. It’s a small gap considering Games with Gold now offers double the amount of games as PlayStation Plus. Regardless, you’re getting more value this month on both services than what a year of membership costs so it’s a win for both services.

Adventure Time: Pirates of the Enchiridion – 62

So looking at the Games with Gold lineup you end up with an 75 average score between the titles which is five points higher than it was in February. The overall lineup is solid across the board with two games scoring an 80 and another with a high 70. Adventure time was the lowest here with a low 60 but it didn’t hurt the average too much. Now let’s look at the PlayStation Plus lineup.

So looking at the PlayStation Plus lineup you end up with an 85 average which is up a lot from the 78 average the lineup had in February. I’m not sure but this might be the highest average ever for PlayStation Plus. Now this is easier now that only two games are being factored into the average. Both games this month were very well received with The Witness having won Game of the Year awards and Modern Warfare still being considered the best Call of Duty of all time.

So when comparing both lineups in March, PlayStation Plus comes out far better with a 85-75 win. This area has always favored Games with Gold in the past given that they had less games to factor into the average but that advantage has now shifted to PlayStation Plus. Either way both lineups offer some good games this month and it’s up to the gamer to decide which games look more interesting to them.

So when comparing both lineups this month I’m going to give the edge to PlayStation Plus. While Games with Gold does have a pretty recent game in their lineup they also have games that are six and fourteen years old. They continue to include these original Xbox games in their lineup and I’m just not sure how many people care to play a game that is that old. PlayStation Plus’s two games are no more than three years old so they both hold up and both might be something you haven’t played yet. Again this area might not mean anything to you but some gamers like getting newer games for free as there is a lesser chance that they have played them.

So for the third month of 2019, PlayStation Plus comes out as the overall winner with a 2-1 win over Games with Gold in the compared areas. PlayStation Plus won the score category as well as the game newness category while Games with Gold won the value category. All of this doesn’t really mean anything though and as always it’s up to each gamer to decide which lineup is better for their individual tastes. Be sure to let us know in the comments which lineup you like better in March. 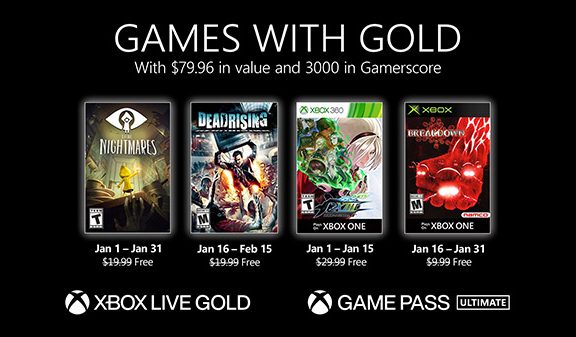