I have a love/hate relationship with difficult games. On one end, I like to breeze through a game and feel all-powerful, as a means of escape from the day-to-day struggles of life. But on the other end, I like a good challenge and I can appreciate the satisfaction it brings when you finally beat an impossible boss. In games with RPG elements, you can usually just grind away the challenge, but in Sinner: Sacrifice for Redemption they really trimmed the fat and left only the meat of the game: the boss fights. Luckily this is where the game excels: the bosses all have a unique look and require a completely different approach. You’ll probably die over and over again until finally finding the tactic that works but when you finally make that “click” in your head: It’s Oh. So. Satisfying! The bigger they are, the harder they fall

But let’s not get ahead of ourselves, why are we facing these bosses, you ask? Is there a story told in the game? Why yes, there is some semblance of a story, but just like in a Mario “save the princess”-like quest, the narrative is only here as an excuse to pit us against inspiring boss battles based on the seven deadly sins. Before facing each boss, you’ll get a small story segment told through pencilled artwork (a style I’m personally rather fond of) and a voice-over giving you some hint of the boss’ history and why they became the embodiment of sin. After slaying Sloth, Envy, Gluttony, Wrath, Lust, Greed & Pride you’ll have to take down a final boss which I’ll keep secret, though everyone paying attention will be able to wager a good guess halfway in.

NOTE: There’s a bonus boss that is present in the Switch version and that has been added as an update to the other platforms. It embodies cowardice with an appropriately shaped adversary and rewards you with a nice new weapon too! What’s a matter, are you chicken?

So it’s just a boss rush game then? Well yes, but it adds a very interesting and unique mechanic, one that finds its origin in the game’s title: Sacrifice. Before facing each boss, you’ll have to give something up: Happens to me at the end of every day to be honest!

The sacrifice you make is kept throughout the game, so you’ll have to pick carefully what you’re willing to part with from the get-go. In other words: the order in which you face the bosses can be of great importance to how manageable they are to you. Sinner will never force this choice upon you though, it’s completely up to the player. Should you feel the need to regain your lost bonus, you can do so, but it will also resurrect that boss. I’ve been able to beat all bosses in the order I have chosen originally, but it wasn’t without issue. Some of them took me over an hour before I had their attack patterns and proper countermeasures figured out. If you do manage to get past a boss without being hit a single time, it’s an immensely satisfying feeling that makes all the suffering worthwhile though. What helped drive my persistence were the amazingly designed bosses. They look impressive but I couldn’t shake the feeling that the hardware was limiting the visuals somewhat and this suspicion was confirmed when I checked online videos of the game running on PC. The difference is significant: no jaggy edges, no pixelated contours, no texture pop-in… All technical hiccups that were present in the Nintendo Switch version. Pretty from afar, but far from pretty

Next to these graphical issues, there were also some technical mishaps:

It’s a bit infuriating when you get the feeling that losing wasn’t entirely your own fault, especially if you were just getting a good run in, with the boss stunned on their knees after a correctly timed parry and your character simply refuses to chip away at the final sliver of health. (and no, it wasn’t because of a lack of stamina or because I was frozen) When everything does work as expected it can be a true joy, dodging incoming projectiles, parrying an attack with perfect timing, destroying the armor of a giant… Quite pleasing!

You’d think that a game with only a handfull of boss fights would be exhausted from replayability rather soon, but luckily it offers a few different endings and gameplay modes, one of which includes a true boss-rush where you face them in a row. That being said, you can complete pretty much everything in around 10 hours (I just took longer because I’m not the best at this type of game, but endurance goes a long way)

Well, will you look at that: I’ve made it through the entire review without mentioning Dark Souls! (until now 🙂 )

Sinner: Sacrifice for Redemption offers some very interesting boss fights and introduces an innovative new concept through its “sacrifice” theme, causing you to grow weaker instead of stronger as you progress. While your character may end the game as a weaker version of himself, you’ll come out as a stronger player. Only a few unfortunate technical issues hamper it becoming a true indie gem, but in the end, I have no regrets about spending time with this challenging title.

(Reviewed on Nintendo Switch, code provided by Another Indie) 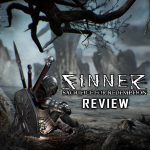