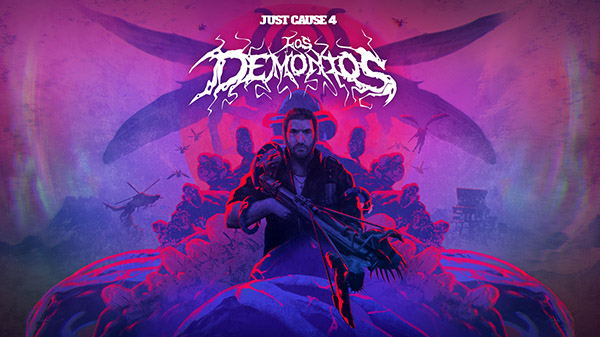 Avalanche Studios has announced that the second expansion pack for Just Cause 4 called Los Demonios will launch on July 3. It will be available for purchase standalone or as part of the “Dare Devils, Demons and Danger Expansion Pass.” Those who have the Gold Edition of Just Cause 4 will get access to this expansion one week early starting on June 26.

Here is what you can look forward to in this expansion:

When Rico & Javi, investigate a newly discovered temple off the shore of Solis, an archaeologist working with the Black Hand unexpectedly releases an ancient demonic force from its imprisonment.

A parasitic infestation now spreads across Solis, terrorizing its inhabitants and attacking any Black Hand forces that stand in its way. Rico must tackle a horrifying new threat and seek out answers to eradicate the demon invasion from the island permanently, before it’s too late!

Discover a completely new sandbox gameplay experience with Los Demonios, as demonic hordes, pulsing tendrils and spore-filled clouds infest the towns and people of Solis in an exciting new supernatural addition to Just Cause 4.

Face the demons across new missions that will require all the skills and tools at Rico’s disposal to emerge victorious. Vicious demons spit corrosive projectiles, possess soldiers, and even take over military vehicles and turn them against Rico.

Seamlessly integrating into the Just Cause 4 sandbox, the new missions enhance the crazy open world experience further and provide a return to the popular liberation gameplay of the Just Cause 3. Introducing new weapons and equipment to unlock, including the Demon Crossbow and Demon Egg Supply Drop, Los Demonios lets you take the new tools of destruction into the open-world sandbox of Just Cause 4 for explosive new action packed moments of glorious mayhem.

In other Just Cause 4 news, the Spring update is out now for the game and brings improved graphical features and gameplay updates. The world lighting has been completely changed for the better, there are now destructible train bridges and statues, new chaos objects to destroy in the open world, more ammo, and a dialed-up heat system that will make the Black Hand even more challenging.

0 0
Previous ArticleAn All New GRID Races to PlayStation 4, Xbox One, and PC on September 13Next ArticleYu-Gi-Oh! Legacy of the Duelist: Link Evolution Launches on Nintendo Switch in the West on August 20