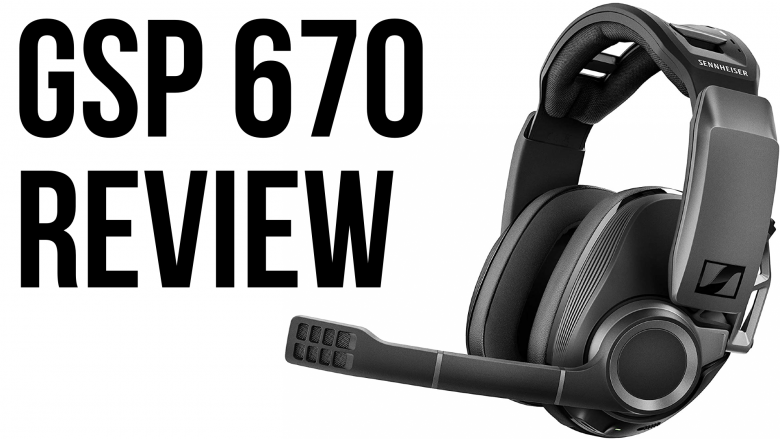 The GSP 670 is EPOS’ flagship, high-end wireless gaming headset. Compatible with PS4 and PC, the headset truly is a marvel of audio engineering. EPOS promise audiophile sound with ultra-low latency and I am pleased to say they deliver on that promise. Speaking of promise, that’s the word I would use to describe what EPOS is showing. Through a few iterations now of the GSP line, we have witnessed incremental upgrades that have resulted in the powerhouse that is the GSP 670. However, whilst the audio engineering is near-perfect, some other important features seem to have been overlooked in pursuit of this goal.

First up, to focus on the things that the GSP 670 does well, we can start with the most important metric: sound. As aforementioned, this is the department that the GSP 670 really knocks it out of the park. Most of our testing occurred on the PS4 and it really does deliver a supreme audio experience. Powered via USB wireless connection and bluetooth, the headset is capable of producing a high quality sound output. The sound is precise, packs a punch, and reproduces excellent variety between highs and lows. It really is top-notch in this category.

I spent most my time testing the headset out on Call of Duty: Modern Warfare. This is because of the enticing and exceptional sounds you’ll hear in the game. From deploying in on a chopper to the orchestra of bullets, grenades and a whole varied arsenal of weapons and vehicles, it really comes to life whilst wearing the GSP 670. Whether it’s a gas piston, direct impingement, or bolt action, each unique gun is immediately identifiable whilst using the GSP 670’s thanks to the precise and high-quality sound.

Wearing this headset allows you to truly enjoy exceptional immersive soundscapes; the sound gives you a big, deep, booming echo in larger expanses of scenery. Personally, I had to turn the volume down a few times because of how realistic and loud it was – really taking the immersion to another level.

As far as downsides, there really is not much to say. Having said that, one minor inconvenience came in the form of a static interference that cuts in infrequently if the headset doesn’t have a clear, unobstructed connection to the USB.

The design of the GSP 670 is sophisticated and stylish

Gaming headsets can sometimes suffer from being a bit too edgy with their designs. Thankfully, EPOS have a different philosophy with the GSP 670 which features a stylish all-black design. Aesthetically, the headset exudes premium quality. The aesthetics do a marvellous job at disgusting that certain components of this headset are in fact plastic, due to the sleek metal-like design.

Friends with whom I shared photos of the GSP 670 immediately asked me “how much are they?” – a sign to the immediately noticeable high-end design. Whilst on the bulkier side, the pressure sliders atop of the headset provide welcome relief, especially during longer gaming sessions. In terms of controls, the button placement makes it very easy to adjust volume, check battery life and connect the headset.

The EPOS | SENNHEISER GSP 670 appears bulky but is surprisingly comfortable

At first glance the GSP 670 does appear rather bulky. This might leave one to assume that it will become uncomfortable longer gaming sessions. Admittedly, the thought crossed my mind when I first saw the headset in person. However, as in life, assumptions can often be incorrect. That’s true in my case with the GSP 670. Thanks to the pressure sliders atop the headset, pressure can be adjusted to your liking.

That being said, they are on the weightier side for headsets and for people with smaller heads, I can imagine this might be uncomfortable for prolonged sessions. The ear-cups are made of a high-quality material and feel very snug and comfy over the ears. Overall, whilst not the most comfortable headset out there, it does surprise one just how comfortable it is despite its weight and bulkiness.

The GSP 670’s Microphone does the job well enough

EPOS laud the GSP 670’s microphone as broadcast quality but it does unfortunately fall short of those claims. Whilst not a bad microphone by any means, it does fall short compared to the promised broadcast quality microphone. On PS4, the microphone also lacks mic monitoring which is sorely missed when you play in a group of friends using party chat. Not being able to hear one’s own voice whilst balancing game chat and voice chat is a noticeably frustrating experience.

Noise cancellation is present here and as affirmed by my usual party chat members, it works a charm. I tested the mic myself using the PS4’s in-built system mic testing and it replicated my voice with a crispness and clarity one would expect from a headset at this price.

To get the most out of the EPOS | SENNHEISER GSP 670, it’s recommended you use them whilst gaming on PC. Whilst the PS4 sound doesn’t suffer, it does lack many of the features that PC gamers will enjoy using this headset. Through what EPOS call The Gaming Suite, you can easily choose between preset audio profiles created for various game genres. Or you can dive in and tweak the audio in your stereo or 7.1 surround sound gaming headset. As aforementioned, all these extra features and tweaks are limited to use on the PC, whilst PS4 users will miss out.

All in all, EPOS have delivered an audio juggernaut with the GSP 670 headset. Sound is first-class and it’s clear this is where the focus is as the headset’s selling point. Coming in at £279 in the UK and $319 in the US, it’s certainly at the high end of gaming headsets, if not the highest end from what I’ve seen. This is a headset that mostly lives up to that price tag, especially in the sound quality department.

*We are grateful to EPOS for providing a review unit of the GSP 670 for the purpose of this review. You can buy the GSP 670 from the EPOS website here.*

Tags: GSP 670 battery life, GSP 670 Features, GSP 670 Mic, GSP 670 performance, GSP 670 Review, GSP 670 Sound
Summary
The GSP 670 from EPOS is supreme in the sound department which one would expect given its price. A few shortcomings prevent this headset from being truly remarkable.
Good
Bad
9
Amazing