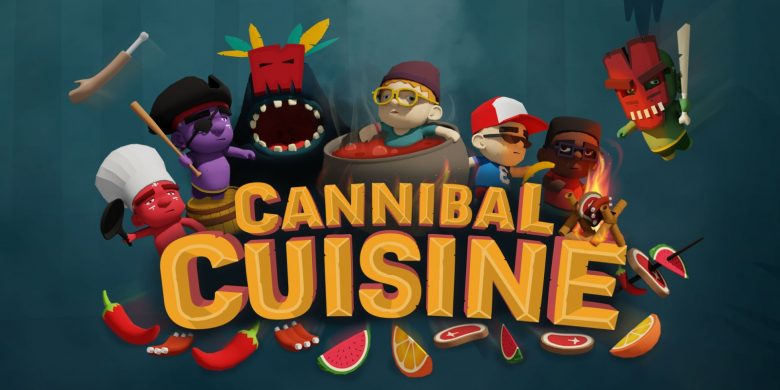 Cannibal Cuisine is a game I’ve had the pleasure of experiencing through multiple phases of its development. The Cannibal Co-Op Cooking game (CCC®) is Belgian-made and as such, I’ve already been able to get my greasy palms on a controller at local events like Gameforce & 1UP.

It’s a cooking party-game with a twist: you play as a tribe of cannibals, going about their “peaceful” lives when Hoochooboos suddenly show up: gaping mouth-gods with a big appetite and if you don’t feed them their favourite dishes, they’ll take it out on you.

There is a campaign mode with 24 levels across 4 different zones, but the set-up is mostly the same: tourists will wander into the area and you can chop them up for some tasty meats. Other corners of the map will have fruits, peppers and such for you to pick up. Since your gods want a healthy mix of protein and fiber, you’ll have to skewer a specific recipe over a fire and wait for it to be juuuust right.

The recipe names are pretty funny and actually served as a great reminder for which recipes to gather. When the gameplay becomes too hectic, it’s nice you can use shortcuts to shout to your couch-buddies which meal you’ll be focusing on:

Each location brings with it their own environmental hazards and you’ll be succumbing to them quite a lot. The game is at its most frustrating when you’ve successfully prepped a dish, cooked it to perfection and then hilariously misjudge the width of a barrel and drown in the river.

Sadly some of these deaths felt like it was the perception of certain bridges and barrels being slightly wider than they really are and you can feel cheated when you die because of it.

Luckily your little cannibals come equipped with an ability of your choosing and while Dash allows you to move faster, it’s also the perfect method to get across small gaps. Other abilities are:

You can also customize the look & feel of your little cannibals with a hat, weapon or color of your choosing, which is a nice touch but I would have appreciated unlocking extra cosmetics as I played.

Luckily Cannibal Cuisine throws some variation into the mix: after every five regular levels, you’ll get a special challenge that doesn’t focus as much on the cooking. Either you’ll be surviving waves of enemies with a big boss at the end or you’ll be fleeing from a rolling log full of spikes.

No matter if you’re playing the campaign in co-op or challenging your friends in the versus mode (where it’s blue team versus orange theme), the advice remains the same: play this game with friends. It’s kind of fun with two people, but it can be a chaotic messy blast with four.

Going at it by your lonesome is not recommended and you’ll only end up frustrated at the almost impossibly high minimum score requirements. (EDIT: I’ve been told by the developers this will be patched very soon and the requirements will scale alongside the amount of players)

Cannibal Cuisine is a juicy fun party-game when you’re cooking alongside three of your friends in the same living room. As a single player experience it doesn’t have enough meat on its bones, but it’s clear it was never intended to be played as such.

*Disclosure: a Nintendo Switch review copy was provided by the developer. 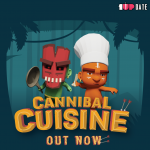