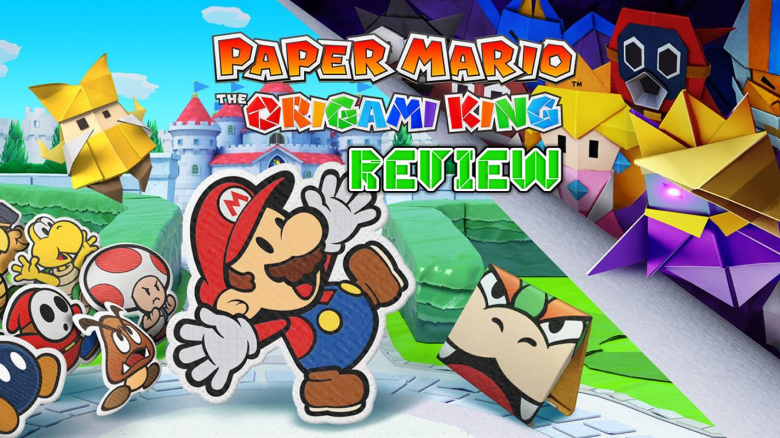 Paper Mario: The Origami King is turning over a new page and takes our cut-out plumber on a brand new adventure! In this in-depth review, we’ll go over all the major elements of the game, without spoiling too much of the plot (which is a more elaborate version of the usual “save-the-princess” trope)

The story starts off with the two Mario brothers being invited to Peach’s castle (again) but when they arrive, everyone has been turned into Origami by the evil king Olly. He moves the castle to a faraway mountain, tied up with various colourful streamers that you’ll have to unwrap throughout the game. Luckily you won’t have to face him alone as his sister Olivia joins our party and helps out along the way.

While the main narrative isn’t as deep as your average RPG, the adventure will send you off into the far corners of the world and you’ll meet some interesting characters, each dealing with their own issues caused by Olly’s meddling. Even the very world itself has been damaged, but luckily that’s nothing a bunch of confetti can’t fix.

Herein lies the biggest strength of Paper Mario; everything you’re tasked to do is just so damn satisfying! The gameplay loop of discovering new and exciting places and having a ton of holes to fill up with confetti or treasures and blocks to find… It’s scratching an RPG itch I didn’t know I had.

The world is also scattered with toads who find themselves folded into the weirdest shapes, waiting to be rescued. You find them crawling around as bugs, hidden in the soil like flowers or wedged into strange places. Luckily you’ll unlock a tool that will alarm you of their presence and later on you’ll even get a radar that helps you pinpoint their exact location.

Paper Mario: The Origami King just oozes charm which makes the game really hard to put down. I regularly found myself grinning from ear to ear because of the masterful delivery and whimsical feel to it all.

Paper Mario games have always had a fun flair to them and while there aren’t many hilarious “laugh-out-loud” moments, it will never shy away from a good pun. Everyone who’s read my reviews before knows this is exactly my kind of humour and I couldn’t stop screenshotting these throughout my playthrough. After all; Paper Mario’s puns aren’t just funny, they’re tear-able.

Let’s get into the gameplay now. Delving into the exploration first and the combat afterwards, because while the fights are a major part of the game, you’ll probably only spend about 20% of your time in them. The meat of the game is finding your way to the next objective by solving puzzles, talking to NPCs and sometimes using key items in your inventory.

One new addition that plays a role in both the exploration and combat are the brand new 1000-fold arms. You’ll unlock this ability really early in the game (as soon as you meat Olivia) and they’ll let you tear through the level or reach objects that are too far away. My recommendation is to immediately go into the settings and switch the motion controls off though, as it feels a lot more natural to use these arms with manual input.

Olivia will also unlock the power of four vellumentals throughout the game and their abilities will let you spout water, set things ablaze, freeze over lakes or make the ground rise & lower. You can even use these in battle!

The battles themselves are also really unique to the game and a point of great discussion among Paper Mario purists. A returning element has always been the use of your boots and hammer as your main means of offense. But now you’ll have to tactically use them on a round grid.

You see, before you get to choose your weapon, you’ll need to turn dials or slide panels to perfectly align your enemies. Boots will attack the ones in a straight line (with Iron boots being able to stomp on spiked enemies) and the hammers will hit four of them grouped together. You’ll get a set amount of actions to defeat your foes and if you align them just right, you’ll get an attack bonus.

It’s a really interesting mechanic, but it’s also the single biggest weakness of the game as this required pre-combat puzzle gameplay gets old around the halfway mark. Luckily the combat does switch up somewhat for the boss-fights, where you’ll have to instead manoeuvre yourself to get close to them or hit them with a specific attack.

Each boss will make your life miserable by locking certain tiles into place or by putting damage-dealing traps in your path. This can be challenging at first, but once you become accustomed, you’ll start seeing the patterns to victory rather easily. Or you could call for help.

Remember when we talked about finding missing toads earlier? Well, you’ll be extra motivated to save them as they also have an impact on the combat. You can spend coins during battle and they’ll help you arrange the board in an optimal manner, while also dealing minor damage to enemies and throwing you some health-restoring mushrooms.

This “helping hand” is a returning element in the game. Nintendo really wants you to be able to beat the game with minimal levels of frustration. If you’re failing at a battle, you can ask for hints or get the toads involved. If you’re struggling with a puzzle, the game will make it easier each time or allow you to pay a small fee to bypass the puzzle altogether.

Paper Mario: The Origami King offers plenty of variations on the default gameplay elements and it never shies away from offering brand new experiences. The game is filled to the brim with fun optional minigames like throwing Shurikens or fishing.

There are also more obligatory side activities like participating in a game show or beating challenges to test your Courage, Wisdom and power. Yes, that’s an obvious The Legend of Zelda Triforce reference. You’ll have seen a ton of other Nintendo references by the time the credits roll.

One thing I didn’t much care for is the automated save system. While you have SAVE blocks spread across the different environments that allow you to manually save your game, there are also a few automatically triggered ones and these can get frustrating. For instance, there is a forced whitewater rafting-like sequence in the game and when I tried to do it over later on, just to get an optional prize for picking up all the coins, I found that it was impossible to exit out of the event or force an early “retry’ after having missed a coin. I had to complete the entire run or intentionally sink myself.

It’s no secret that I love water in videogames. I don’t know why, but it just makes me happy seeing fake blue gaming H2O, even if it’s paper, it turns out. There was already a desert region that offered you a buggy to ride in to cover vast distances and then, much to my surprise, Paper Mario also threw in a vast oceanic environment to explore.

There are multiple islands you can visit on the ocean, most of them completely optional. Nothing tickles my inner completionist like checking off to-do lists and having this virtual playground had me giddy like a little kid. Saving toads will mark your map with red crosses, to indicate sunken treasure. While most other games will just have a short animation showing you that treasure being reeled in, Paper Mario goes the extra nautical mile by letting you submerge in your submarine and grab it yourself.

Because the world is quite sizeable and walking only gets you around so fast, there are a few methods provided for fast travel. You’ll unlock the archetypical pipes Mario is so well-known for that let you warp back to the central town or you can use one of the fax machines to xerox yourself across the land (or does that make a copy of you while it shreds the original Mario? Never mind… must’ve had it confused with SOMA)

One thing the recent entries in the Paper Mario series gets a bit of unwarranted flack for, is not being enough of an RPG. While yes, The Thousand-Year door had actual RPG mechanics with experience and levelling up, I don’t think it’s fair to diss The Origami King for not going down the same road. It does its own thing and can still very much be considered a full-fledged RPG.

You can increase your endurance via HP upgrades or equipping accessories that make your block more effective and you can increase your damage potential by finding and buying more powerful weapons. Free tip: Don’t be stingy on using the more powerful ones even if they have limited uses. You’ll find a lot of them and the game throws excess money at you to buy new ones.

Playing through the story will probably take you around 25 hours, but if you’re going for a completionist run with all hearts found, as well as all toads, treasures and ?-blocks… that will last you well past the 30-hour mark. Completing Paper Mario isn’t all that hard, because of all the useful tools handed to you, but it still feels like an achievement and above all: very, very satisfying!

The Origami King is a fantastic new page in the Paper Mario RPG playbook offering a funny story that is guaranteed to crease you up. Whenever the game threatens to get stale, it’ll have an exciting new twist waiting just around the corner.

*Disclaimer: A Nintendo Switch review copy was provided by Nintendo 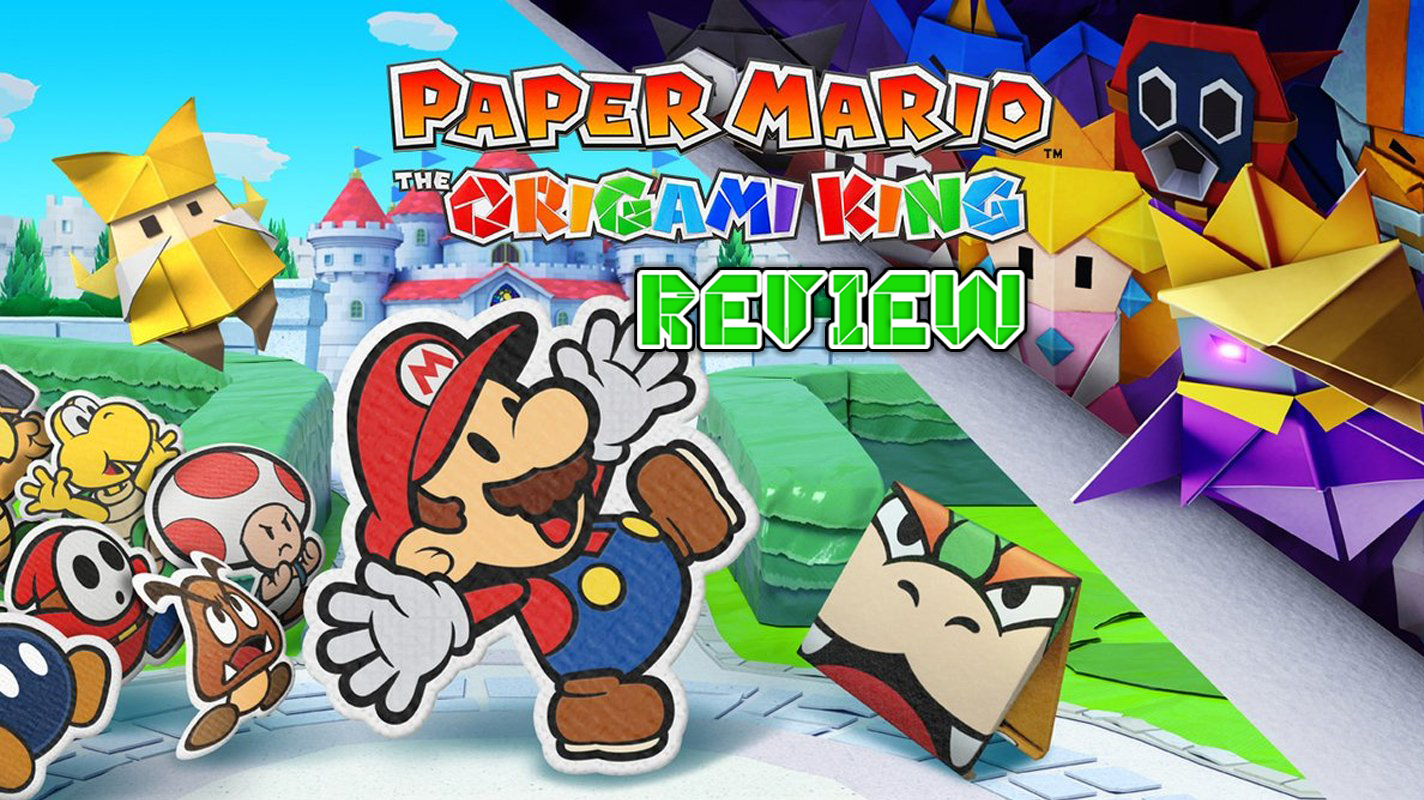 3 0
Previous ArticleNew Nexomon: Extinction Gameplay Clips Show Off the World, Characters, and How to Catch a NexomonNext ArticleHow Video Games Evolved From The 90s to Today