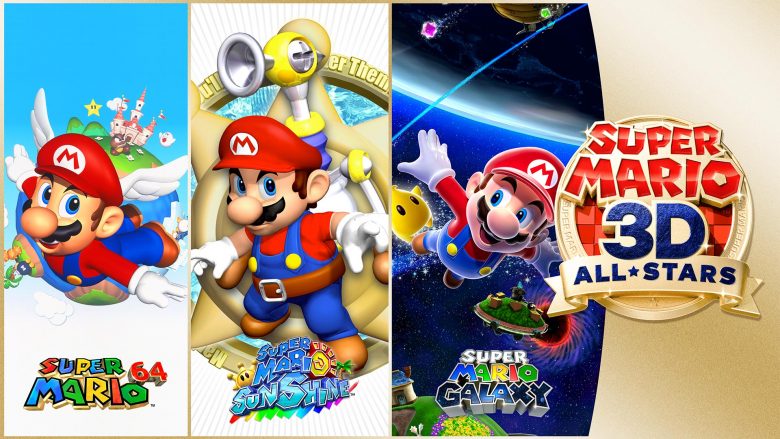 To celebrate 35 years of Mario games, Nintendo released a bundle with three of the moustached plumbers’ legendary adventures. Super Mario 3D All-Stars offers a nice trip down memory lane for us old-timers and a fun introduction into the Mario legacy for newcomers.

Before we jump into the games, let’s take a quick look at the menu and extras first.

I was a bit surprised about the style choices in this main menu where you pick which of the three games you want to play. It’s got a very “old & gold” feeling, reminding me of a PowerPoint presentation I once did for The Great Gatsby. The box arts of the games are in their original dimensions, which adds to the nostalgic value but detracts a bit from the whole collection feeling like a whole.

Nintendo threw in the soundtracks for all three games, which is a great inclusion and you can even use the Switch as a music player with the screen set to black to save on battery. It’s a nice touch!

I went through the games chronologically, which means I got to revisit an old favourite of mine. Unlike most people I know, I didn’t play the original on the Nintendo 64 but instead had my first run-in with the game on the Nintendo DS, back in 2005.

I was a bit sad to discover that this turned out to be a port of the original version, as it missed some of the extra features that made it so charming on the DS in the first place, like the starting screen where you got to mess around on the touch-screen with Mario’s giant 3D face, or the various minigames they created especially for that version.

While the character models and the world received a slight visual upgrade, it was very noticeable that Nintendo kept the original resolution, making for a lot of black space around your screen. I wasn’t expecting anything close to a full remaster or remake, but it was a bit of a letdown that they weren’t able to bring this to a full-screen experience.

Super Mario 64 is an amazing adventure with tons of stuff to do and if you’re going for a complete run-through, you’ll be spending hours upon hours, looking for hidden stars. I was happy that I could still recall most of the secrets, but at the same time, I could never shake the feeling that Mario wasn’t behaving like I wanted him to.

The controls and camera-work in this title did not stand the test of time and you’ll often find yourself struggling to do simple tasks like reading a sign or talking to another character. There is no free-control camera like you’d expect in modern 3D platformers and there isn’t even a setting to change the Y-axis to inverted.

It’s still a fun game and I love how this port helps preserve the game for the ages, but you’ll need some nostalgia-glasses to be able to fully enjoy it.

I actually went into this game with virgin eyes. Super Mario Sunshine has always been one of those games that really made me wish I had a Nintendo Gamecube back in the day. Kid-me was only allowed to have one console so I missed out on an entire console generation of amazing Nintendo titles. I’ve personally been asking for this particular game to come to the Switch for years and now it’s finally here!

Super Mario Sunshine introduces a new mechanic through FLUDD, a machine that sprays water and can be used as a jetpack, among many other uses. It’s basically Mario’s version of the vacuum that Luigi uses to explore spooky mansions.

Because you have to control Mario and make him jump from platform to platform while also aiming and shooting water at plenty of targets, it’s never been as important to get the camera working right, and it does for the most part. You can easily use both analog sticks to manoeuver our red-hatted plumber to where he needs to go and as long as the paint you want to wash away is dead in front of him you’ll manage to hit it.

But very frequently, you’ll have to go into first-person camera mode to aim and then quickly switch back to free movement to get a blue coin that will disappear or to dodge an enemy’s attacks. It takes a bit of getting used to, but it’s not terribly frustrating. (As long as you’re a non-inverted player, because the setting to change the Y-axis to inverted is again missing)

Graphically the game was surprisingly pleasing to the eyes for a 2002 game and it received a welcome visual upgrade on the Switch. A bigger resolution, better lighting, clean textures, more depth of field and anti-aliasing on shadows. I’d go as far as saying this is the best version of the game we’ve seen so far and that it feels almost like remaster-level quality.

For someone who hasn’t played Super Mario Sunshine when it first released, being able to play it on the Nintendo Switch and having it look this good, makes it the most important aspect of this bundle.

Super Mario Galaxy and I have a weird history. It was a game everyone I know loved, but the controller never felt right when I played it on the Wii. So much so that this is the only Mario game which I’ve started playing but never got around to beating.

Luckily all my concerns have vanished like snow in the sun: it’s now become a joy to play. Handheld mode especially makes good use of the Switch’s features, utilizing the touch screen to replace the weird “point Wii-mote at screen while still moving around with Mario” interactions it had before. All while still supporting the various tilting interactions made possible by the built-in gyroscope. Control-wise: this is the best version we’ve seen of the game.

Graphically it’s also up to snuff. With an increased resolution, more particle effects, better anti-aliasing and more defined shadows. I don’t really get how people are calling this a straight-up port when it clearly looks & plays better than ever before.

I’ve been playing it for a few days non-stop now and I don’t think I’ll quit until I’ll have beaten the game this time around.

People seem torn on this trio of legendary platforming titles. On one hand, you have those complaining these are lazy ports and worrying about the timed availability. But on the other hand, the collection still sold amazingly well and now that the tempers have cooled down a bit, it’s time to look at this release as a success story:

Super Mario 3D All-Stars offers the best versions available for Super Mario Sunshine and Super Mario Galaxy, introducing them to new players on the widely adopted Switch and helping to keep the games around for posterity. It’s a bit of a downer that Super Mario 64 isn’t the much-improved version we’ve had on the DS, but I’ll take it as a nice nostalgic bonus in what is otherwise an amazing collection of games.

*Disclaimer: A Nintendo Switch copy has been provided to us by Nintendo 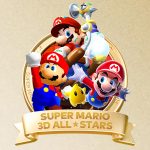