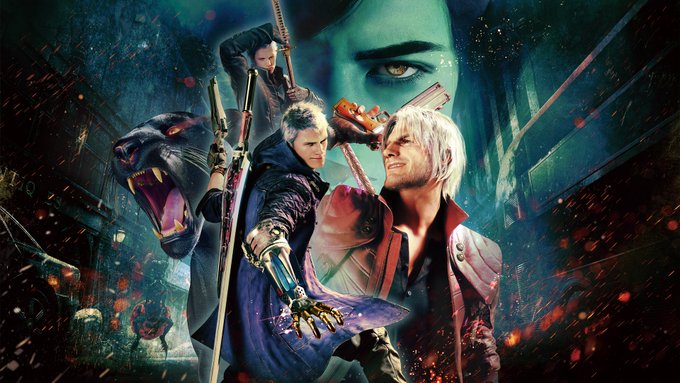 In March 2019, the eleven year wait for the next official entry in the Devil May Cry franchise arrived with Devil May Cry 5. I reviewed it and called it one of the best action games of the generation because of the deep combat system and the awesome story, music, and graphics. I played through that game several times and it was my personal game of the year last year. Needless to say, I’m very much looking forward to the next entry whenever it arrives but, in the meantime, Capcom is giving us fans Devil May Cry 5 Special Edition on the new console platforms. How does it improve on what was already an outstanding game and is it worth your time if you already played through the original game?

Since this is just an improved version of Devil May Cry 5, I’m not going to go too in-depth on what was already in the game. If you want to know about that you can look to my review of it here. I reviewed this on PlayStation 5 but it’s available over on the Xbox Series as well. Unlike some other games that are releasing on last generation and the new generation consoles there is no free upgrade for those who already owned Devil May Cry 5 and there is no way to carry your save data over. The game isn’t fully priced though and it didn’t bother me really to start from scratch again but both things are worth mentioning for those who may be interested.

The story in this game still very much follows the three characters who were playable in the last game with those being Dante, Nero, and V. All three have their own move sets, weapons, and fighting styles and I had a blast learning the ins and outs of them. Dante was my favorite because of the sheer number of weapons he has at his disposal but Nero and V are still a lot of fun too. Now if you go back and read my original review, you’ll know that one of the only things I didn’t like about the game was that there were too many loading screens. Well on PlayStation 5 that annoyance has all but been eliminated thanks to the SSD drive within it. Just about every single loading screen is gone in a flash letting you get right back to action as it should be. Seriously, once you play this version of the game, you’ll never want to go back to the PlayStation 4 or Xbox One version and deal with those load screens again.

Now before I go any further in this review, I’m going to place a big SPOILER WARNING here for anyone who has yet to play Devil May Cry 5. This is related to a new playable character in this version of the game that you may or may not be aware of. That character is of course Dante’s brother Vergil who all of us Devil May Cry fans were hoping would be added to the game as downloadable content. That is happening for the prior versions next month so you won’t have to buy this new version if all you want to do is play as Vergil. You can play through the whole game as him and I mean the whole game as you’ll never once take control of the other three. There are some new cutscenes sprinkled throughout but otherwise it plays out the same way.

Playing as Vergil is a blast and he very much feels powerful as he should. Those who played as him in prior games will find his move set and weapons to be very familiar. He can use the Beowolf gauntlets, the Mirage Edge, and of course his trusty blade Yamato. Activating his devil trigger causes a clone to appear that will mirror your moves which basically means you are attacking foes with two of you at once. He can also perform a very powerful move that causes V to appear out of his body and unleash all of his summon animals in one flashy attack. Vergil’s Devil form can also be used through his Sin Devil Trigger and a Concentration gauge will make you more powerful the longer you can manage to stand still. In short, Vergil makes a great addition to the playable cast of characters and any fan of his will love how he controls here.

What else is new here you might ask? Two new modes for starters with those being Turbo Mode and Legendary Dark Knight mode. Legendary Dark Knight mode is one of my favorite new additions as it lets you play through the game again but with the number of enemies on-screen drastically increased. That means that encounters will be tougher but it is just so satisfying to cut down dozens of demons on screen at a time. The performance in the game never drops either despite the increased enemy count which was awesome to see. Turbo Mode ups the speed of the game to 1.2x which takes some getting use to but feels good over time. It wasn’t quite the way I wanted to play but its presence here is good for those who want it.

While I was already floored by just how impressive Devil May Cry 5 looked running on the RE Engine on last-generation consoles, Capcom has managed to make it look even more visually spectacular on PlayStation 5. The game has a few different modes you can toggle between letting you go for visuals, ray-tracing, or framerate. The base mode gives you 4K support and runs mostly at 60fps. A ray-tracing quality mode lets you play at 4K with ray-tracing but the framerate suffers quite a bit here. Ray-tracing performance mode lets you play at 1080p with ray-tracing while still sticking very close to 60fps. Finally, there is a high-framerate mode that lets you play at 120fps but since I don’t have a compatible screen to test this out, I wasn’t able to play it this way. I played most of the time in the 1080p mode running at 60fps with ray-tracing enabled as I felt like it offered the best of all worlds.

A couple other things worth mentioning include some fantastic new tracks to what was already an amazing soundtrack. Vergil’s theme is one of my favorites now. The game supports the DualSense controller features but I didn’t feel like they added a whole lot to the experience. You get some feedback in the trigger when you rev up Nero’s sword but there isn’t a whole lot else here that stands out about it. The game has an entirely new trophy list for those who care about that including a few new trophies that weren’t in the PlayStation 4 version. Overall, there was a lot here that I loved and the only thing I can think of at this point that could make it better would be a playable Trish and Lady.

Devil May Cry 5 Special Edition adds even more style to what was already an amazing action game. Not everyone may feel inclined to pay for this again especially since Vergil is coming to the older versions as paid DLC. As a huge Devil May Cry fan though I’m very happy with it as the upgrades to the visuals, performance, load times, and additional modes alongside Vergil made me fall in love with this game all over again.