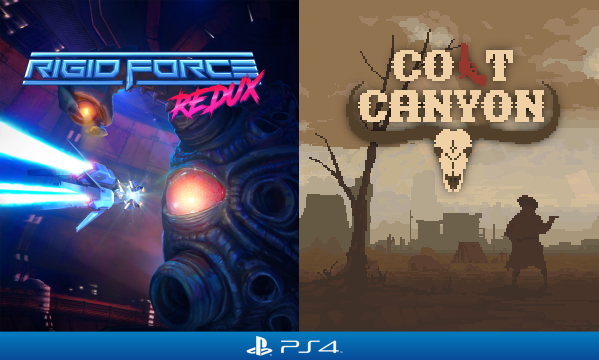 The first is the classic side-scrolling shoot’em up Rigid Force Redux from developer com8com1. It’s available now for $15.99 or $19.99 for the digital deluxe bundle. The second game is the stylish 2D pixel art twin-stick shooter Colt Canyon from developer Retrific. It is priced at $19.99 on the PlayStation Store.

You can watch the trailers for both games below and read more about them.

Battle it out against huge swarms of enemies, heavy gunships, laser wielding mechs and giant alien creatures. Every enemy has its own unique and challenging strategy, from the tiniest creature up to the largest boss. Arm your fighter with numerous upgradeable weapon systems and supplemental Force Shards! Collect Energy Orbs to fill up your energy supply and eventually unleash an extremely powerful blast against your foes! Just in case the extensive, action-packed Main Mission is not enough, try the challenging Arcade and Boss Rush Modes, defend your ranking in the global leaderboards and grab all 40 achievements.

Take your revolver and rescue your partner in this atmospheric and punchy roguelike game.

Colt Canyon is a 2D pixel art shooter where you control a cowboy, or one of the many other unlockable characters, whose mission is to save his kidnapped partner from the ruthless bandits. Take your gun and TNT and shoot your way through a hostile canyon full of hidden treasures, weapons, obstacles, and all kinds of bloodthirsty scum.

Maybe you can save more people than just your partner. But watch out. Once you got your partner your job is not done. You’ll also have to get back home…

0 0
Previous ArticleGravity Heroes Launches on PS4, Xbox One, Switch, and PC on January 22, 2021Next Article5G: A Threat or an Advantage?