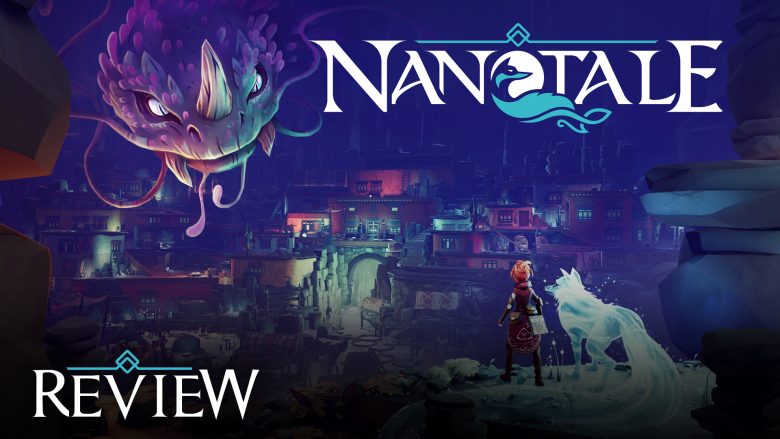 Nanotale, for those not familiar with the title, is the second game in the Typing Chronicles series. Just like its predecessor, Epistory, it’s an adventure game controlled completely by keyboard, where typing words is crucial to exploration, puzzle-solving and combat.

Everyone who’s been following me on Twitter has probably already heard me raving about Epistory, as it’s still one of my favourite indiegames to date and to say I was excited to get my hands on the spiritual successor would be a massive understatement. Yet when I first got to try it out in Early Access back in 2019, I was a bit underwhelmed.
(You can check my preview HERE.)

Nevertheless, I was very happy to finally be able to type CONTINUE on the title screen.

Now, my first experiences with the full release were sadly not too positive either. I quickly noticed some minor issues like the opening cinematic playing while I could already see ribbons of the first level in the background, mixed with some performance issues and the mouse button not working, which kept me from changing the screen resolution.

Luckily, there is a dedicated team working on patches & updates and these issues were fully resolved after a few weeks, allowing me to enjoy the game as intended. With the technical issues out of the way, I was ready to fully immerse myself in this new typing adventure.

Whereas Epistory only had a single narrator to voice the story, Nanotale now has NPCs to interact with. There is even a pretty neat touch where you get to type bolded words to specifically interact with them during conversations. It’s an interesting method to make them more dynamic and they certainly breathe more life into the world.

We play as Rosalind, a young archivist who’s tasked with analyzing the fauna and flora of this magical world. You’ll encounter a lot of “lore” on your quest and as expected, you have to jot down some words in your journal to keep track, each time translating into experience, so it’s in your best interest to track them down and solve puzzles to reach the ones in difficult places.

As you explore the various biomes, you’ll unlock new abilities that help you traverse the world. You can use FIRE to burn down obstacles, ICE to freeze water so you can walk across, LIFE to neutralize poison or grow lilypad platforms and ZAP to electrocute enemies, activate or deactivate ancient technology and even create structures on sandy surfaces.

While these exploration puzzles are interesting, they can also become somewhat frustrating, as there are a lot of collision issues making it hard to move on these player-generated platforms

You can’t always use these whenever you’d like, so you’ll have to be on the lookout for objects that you can target with them. Sometimes you’ll need to apply the effect to a larger area and you can enhance the spell with LARGE, or when you need precision over some distance, you can turn it into a beam-attack with RAY.

It’s envigorating the first time you combine these, typing LARGE FIRE RAY to burn away thorns that block your path, but the game relies so much on this mechanic that you’ll be typing those exact words pretty much the entire adventure.

It’s also weird that you learn WATER and POISON so very late into the game and you don’t ever really need them. Sure you can experiment and use those spells in what little combat remains at that point, but tempo-wise it feels like there was still a lot of game left to come and then it suddenly ends and rolls the credits without a natural feeling buildup.

That’s an issue I had with the Early Access build too, and I was desperately hoping some extra time in the cooker would make the story delivery feel less empty. But there are a few story-beats that just miss their mark and it often feels like Rosalind is just going through the motions and is rarely affected by the narrative herself, other than being the agent that sets worldwide changes into motion.

An example of story that fails to make an impact: you encounter the fox very early on in the game and have to defend it from attacks, but you fail. Suddenly it turns into a spirit fox and you ride it into safety. Why this fox is so important to the world and if there is any importance to being a fox rider at all feels like an important element the story should start focussing on, yet it’s just there. Mostly acting as a ride for you to move across the world faster and it only becomes important to the story near the very end of the ~10hour adventure.

I try to avoid drawing the comparison with Epistory too often, also because I know the developers experience it somewhat as a pain point that apparently players were expecting more of the same, whereas they wanted to experiment and introduce something that feels entirely new.

But it’s mostly in the way the story is delivered that Epistory rises above not just Nanotale but many other indiegames. The female narrator in that game drops poetic bits of story and lore as you make your way forward, giving the adventure a feeling of epic proportions, much like the waythan the narrator was such an important factor in Bastion’s critical reception.

In Nanotale, there is also a few lines of voice acting, but it’s only found at the very start and ending of the game and doesn’t manage to carry the empty space in between. That’s not to say it doesn’t do some things better: the different biomes each have their own troubles and you can assist the people in them by completing various sidequests. Chatting up the locals does make the world come alive, whereas Epistory was a pretty lonely experience.

Speaking of biomes, the world feels bigger this time around and you’ll have to use the map to find your bearings and get around. It also shows you any lore you may have missed and if there are cloudy spots, you know there is an entire region left unexplored in that direction.

I just wish it would have also had a few fast-travel points, as going back to a region on the other side of the map, requires opening it a few times, to avoid getting lost, and teleporting there could have removed a lot of friction.

Each of the biomes looks great and feels different from the previous one though. Nanotale’s watercolour aesthetics are gorgeous and while it’s true I feared the game would lose some of its identity that Epistory had built up with the origami style, this visual approach is equally impressive.

The soundtrack isn’t too shabby either, especially the main theme, which is so good, I’ve been listening to it on repeat while writing this review.

We’ve gotten all this way and I still have to cover one of the most important aspects: the combat. What sets it apart from Epistory is that Rosalind is always free to move around, even during combat encounters. Sure, you still stay in your spot while attacking enemies by typing the words above their heads, but you’re free to reposition yourself at any time.

It’s very important to always stay on the move and make sure your attacks hit as many enemies as possible, but the problem is that some tactics feel so powerful that they outclass any new spells you learn. I got around just fine adding the FIRE element to my attacks for most of the game and only had to change it up with ZAP near the end.

There are even mechanics like mind-controlling enemies or creating decoys, that feel like they should become important to your survival, yet I never really felt at risk. Rosalind can take quite a few hits and she moves much quicker than most enemies, making her almost invincible and eliminating most of the challenge.

When I saw big, bull-like enemies early on, I was expecting it to become necessary to circle around them and hit them from the back, but your attacks are equally deadly from any direction. It also feels like a missed chance to have the elemental attacks matter more, with fire enemies that would be weak to water, plant enemies weak to fire and so on. Instead, you can pretty much rely on the same attacks throughout the game.

That’s not to say your typing skills won’t be put to the test, I’ve been told the adaptive difficulty makes a return, giving you longer and more complex words to type, the faster you are at typing and the fewer mistakes you make. When Epistory launched, it forced me to finally learn to type without looking at my keyboard and those acquired skills came in handy once more.

I did miss the arenas, challenges that you could access from the main menu and that would allow you to compare leaderboard scores with your friends. They also provided an easy-to-launch game mode for when you simply wanted to test your typing skills and I hope they’ll consider adding it at a later point, as a patch or DLC.

Nanotale is a unique adventure that offers rarely-seen typing gameplay, whether it’s used for exploration, puzzle-solving or combat. It looks gorgeous and it sure is addictive to find all the lore, yet the delivery falls flat at times and it sadly can’t live up to its epic predecessor. If you’re a keyboard warrior at heart, it’s still very much worth your time!

*Disclaimer: Reviewed on PC. Review copy provided by the developer. 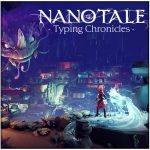