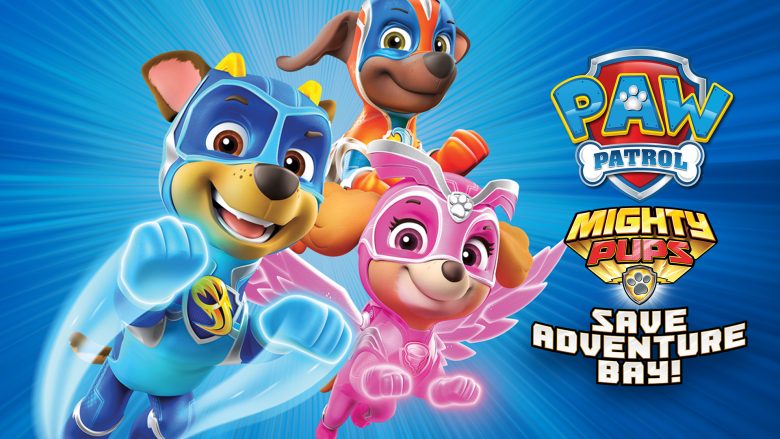 Since I’m 33 years old at the time of writing, I figured I’m probably not the target audience for this game. So I called in a team of experts (= my kids) and asked them their opinions about the game instead. My son Lio (2.5yo) and daughter Fé (6yo) will be sharing their firsthand experiences with the game in this family-review.

My daughter, Fé, has already joined me on a few reviews before (New Super Lucky’s Tale, Disneyland Adventures, Rush: A Disney Pixar Adventure) but Lio’s excited to finally chip in his thoughts as well.

The game hadn’t even started though and both of them were already a big fan of the Outright Games logo, which drew their attention with an animation that looks and sounds like a ball pit. A nice touch that shows their focus on kid-friendly games and IPs.

So kids, are you excited to play a Paw Patrol game?
Fé: I used to like Paw Patrol, but I think I’m too old for it now. I can still name all the characters though and we have all the toys!
Lio: Rubble! Marshal! Rocky! Skye!
Fé: Ok, Skye is really cool. But that’s because she’s the girl and she can fly

What do you like about the game that’s also in the show?
Fé: The pups always help people and they get into funny situations.
Lio: They drive cars! I like cars.
Fé: Yeah Lio, but it’s only at the start of a level! You don’t get to drive yourself. Except the one level with Everest and the snowy road.

What did you miss in the game that is in the show?
Fé: Ryder is the only one that talks here. And it was not the same voice* as in the show. I liked it better if the Paw Patrol doggies talk as well.
Lio: I don’t know.

*Little aside: the game offers a lot of different languages. I switched to our own language (Dutch) by changing the default language of the console and that helped them understand what to do. But they’re right in that it seems to be a different voice.

What did you like most about the game?
Fé: I like the minigames a lot, like Pup Pup Boogie, where we have to make them dance. And I liked that we could choose our puppy, but I didn’t like that it was always the same song.
Lio: I like the superpowers.

There are superpowers? That’s pretty cool! Which ones did you like best?
Fé: Yep. But we haven’t seen any episodes yet on TV. They don’t have superpowers on the TV. But they did in this game. But we couldn’t use them a lot. I wish we could use them more.
Lio: Rubble superstrong!
Fé: I liked Skye more. She can make a tornado. But only at the end of a level. I wish it was used more.
Lio: Marshal use fire! so cool!

So how do you use the superpowers?
Fé: It’s usually just pressing a button really quickly, a lot of times. Or spinning that stick thingy around.
Lio: It’s easy.
Fé: I like the transformations too. Those looked really cool.
Lio: They look like superheroes!!*

So how easy did you think it was to control the Paw Patrol characters?
Fé: I liked the levels where you fly or drive. You only have to move left or right and that’s easy but fun. I also liked that I only had to use one stick-thingy to move around and that I didn’t have to look around.*
*There are no camera controls, making it easier for the little one to control.
Lio: I couldn’t… I couldn’t… I couldn’t get through the quickie thingies.
Do you mean the Quick Time Events? Like swinging Everest around?
Lio: The arrow thingies.
Fé: yeah, those were too hard and you had to help us.

I do like that they always show which button to press on the screen. Did those tutorials help?
Fé: No, you have to tell us which buttons to push. And it’s hard to push multiple buttons at the same time.
Like moving around and jumping in a direction?
Fé: Yeah. I didn’t like the cookies that were in the air.
Lio: I wish I could eat the cookies.

Did you like that there were cookies to collect in the levels?
Fé: No, I just wanted to go and save the people and the monkeys.
Lio: I want to have cookies now.
So, the cookies weren’t necessary and you didn’t feel a need to collect all of them?
Fé: No, it was you who wanted to get all of them. For your “ah-cheevo-ments”.
Lio: Daddy wanted to get all the cookies for himself.
But you also got images as a reward for getting more cookies. Didn’t you like those?
Fé: No.
Lio: No.
OK. Noted. What would you have liked more as rewards?
Fé: Funny videos?
Lio: Yes. Funny videos. haha.

You could also play together. Did you like that?
Fé: No. Because Lio didn’t know how to use his abilities. And he didn’t stay close to me.
Lio: I just want to jump.
So, Fé, you wanted to reach the end of the level. And Lio, you wanted to just mess around a bit?
Fé: Yes.
Lio: Yes. haha.

What did you think of the music in the game?
Fé: I didn’t really pay attention to the music.
Lio: I don’t know.
(…OK. Moving on.)

And what about how it looks. Is it a pretty game?
Fé: I like that it sometimes looks like the show during the videos. But not during the levels where you walk around. And there were too many cookies.
Lio: Cookies. Yum!
Did. You. Think. It. Looked. Pretty. Lio? (sigh)
Lio: I dunno. Yes?

If you would change anything. What would you change?
Fé: I want to see more funny videos. And I would want to see the puppies talk like in the show.
Lio: I want more superpowers!

Ok, thanks for the replies, kids. I’ll take it from here.

Long story short, my kids preferred to watch me play the game, but they didn’t like that I switched it back to English (for recording purposes) and that I played the game like a “gamer”. That is to say: I wanted to collect all the pup treats and badges, so I’d get all achievements and other rewards. They didn’t care about those. Not even one bit.

The minigames were easy enough for my daughter to control and walking around in the 3D platforming levels as well, but she had issues jumping and sticking her landing in the location she wanted. My son was still too young to play at all. He liked to watch but kind of preferred watching his shows on TV instead.

It’s funny to note how quickly they move on from one IP to the other. My daughter used to love PJ Masks, then Paw Patrol, but now she’s more into Frozen and a Dutch TV show called the Night’s Watch. (with vampires, werewolves and fairies). My Son loved Peppa Pig and Simon, now he’s into Blaze & the monster machines. It’s hard to keep up.

Their attention span isn’t always the best either. The levels are short enough that they can see one through without complaining, but not a few in a row. All-in-all it’s not such a long game with about 3 hours worth of content, and perhaps a bit too pricey for the total possible playtime.

Paw Patrol Mighty Pups Save Adventure Bay is a fun distraction for kids who want to see their favourite cartoon puppies in action, but the game gets a bit repetitive and they don’t feel rewarded enough for playing. They seem to like the minigames and the cutscenes more than the actual 3D platforming. But they still had a lot of fun, especially because I was playing with them.

I’ll let them make their own closing statements:
Fé: I liked it but I’m too old for Paw Patrol now.
Lio: I like it. But I want to play a game with Blaze & AJ next.
If you’d have to give it a five star rating, what would you rate it?
Fé: three stars.
Lio: Four is more, yes? Four!

Here’s another video to show the game in action: 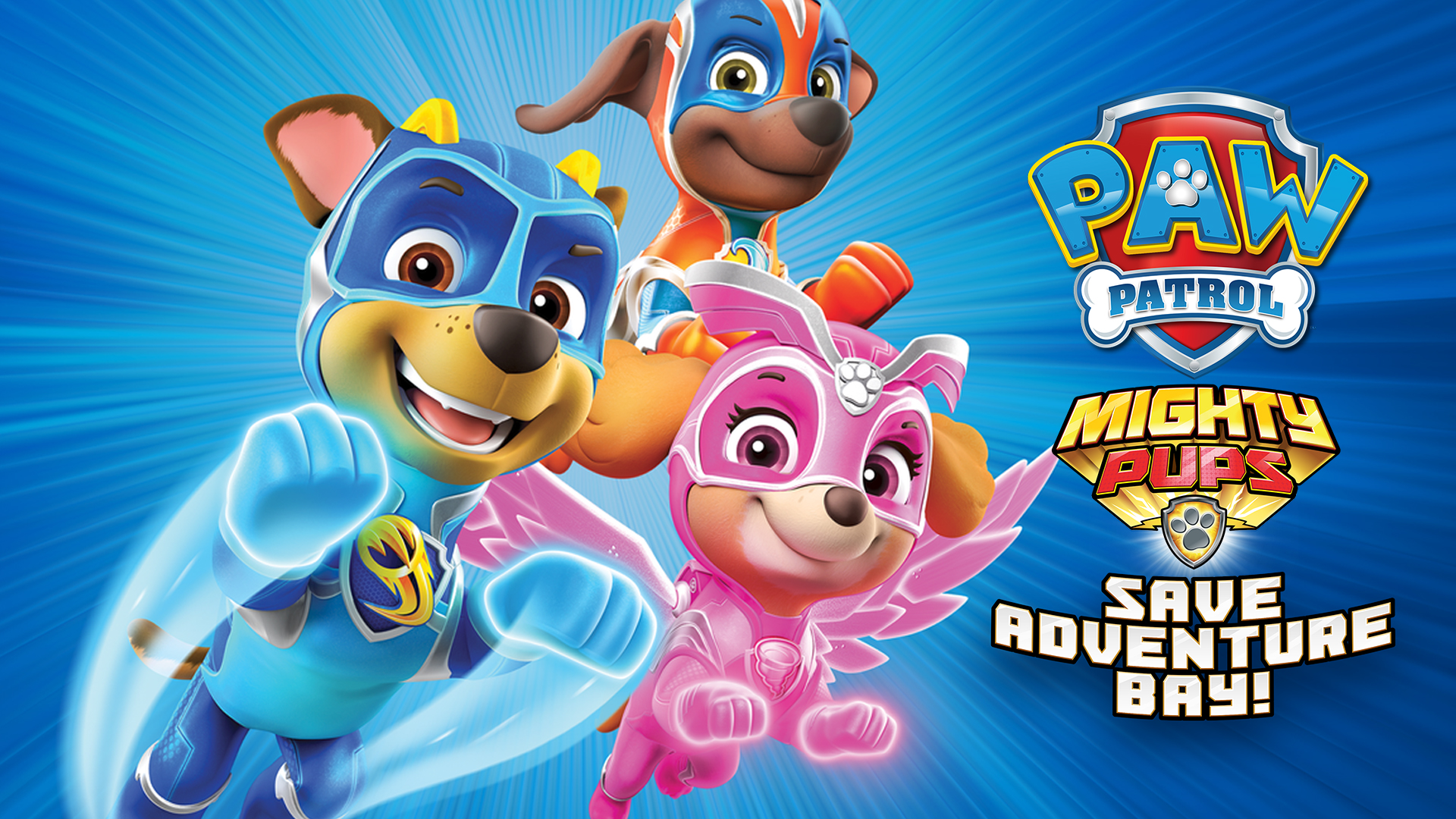 Mighty fun (for the little ones)

3 0
Previous ArticleHorizon Forbidden West State of Play Airs May 27; 14 Minutes of Gameplay to be ShownNext ArticleKing of Seas Review – PlayStation 4