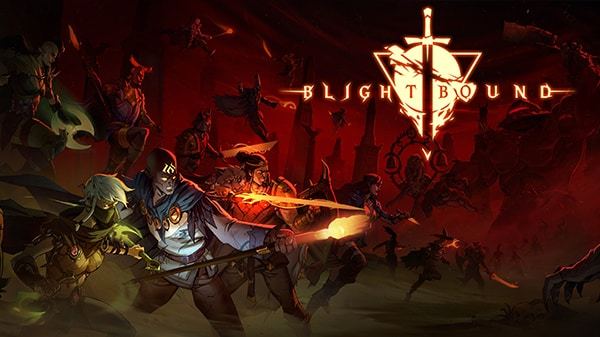 Publisher Devolver Digital has been putting out some real bangers lately so anytime they have a new title coming up my interest gets piqued. Their latest title is Blightbound from Dutch developer Ronimo Games which has been in early access for some time on PC. The online co-op side scrolling hack and slash game has now launched in full on consoles and PC and while I was looking forward to it, I came away a bit disappointed with the final product.

When it comes to multiplayer dungeon crawler games like Blightbound I’m no stranger as I’ve played and enjoyed many over the years such as Gauntlet and Diablo. Blightbound could’ve been really good but I found it stumbles in some pretty important areas. The story of the game is dark as long-ago heroes slayed an evil known as the Shadow Titan. Little did they know that an evil fog known as the Blight would emerge from the Shadow Titan’s corpse and corrupt every living being it came into contact with. Now it’s up to you to delve into the dungeons within the game and push back the Blight once and for all. The story does the job of setting things up but really you won’t be paying much attention to it while you’re playing.

One of my issues with Blightbound is based around it primarily being a co-op experience. Three players can play online together but if you don’t have friends then you’re going to have to play with the AI bots and saying they aren’t great at times is an understatement. They would frequently have problems doing things and moving places I needed them to go to which led to a lot of aggravation. There is matchmaking so if you don’t have actual friends with the game you can find join randoms if you can find them. I did get to play the game with two other people at times and to get any enjoyment out of this game at all you’ll likely need to do the same.

The game offers you over 20 different characters to play as divided up into three categories. You have a wizard class, a tank class armed with a sword and shield, and an assassin class armed with two daggers. While that 20 number for different characters might sound good the truth is that all of them in each class feel roughly the same to play as which was disappointing. Parties also have to be made up of one of each class so you and another friend can’t each play as an assassin for example. If you want to play as a wizard but another player picks it first, you’re out of luck.

You’ll start off the game in your hub area called the Refuge where you can buy new equipment, pick up quests, craft items, and so on. Once you’re all set to go you can pick from a selection of levels and be off on your way. Each of these dungeons or levels isn’t that interesting though and you can finish each one in probably less than 20 minutes. You’ll move from room to room fighting the enemies in each one with occasional puzzles to solve or traps to avoid. When you reach the end of a dungeon, you’ll also sometimes have to fight a tougher boss enemy. When playing with friends the combat can be quite enjoyable at times when you’re working together to maximize each of the different classes’ skills. Getting up close and melee attacking with the warrior while your wizard friend fires off bolts from the back is satisfying. When you finish a dungeon, you’ll get to keep the loot, XP, and any heroes you rescued within it. If you die towards the end though you’ll lose everything you gained in that dungeon and have to start over.

It’s just too bad that while the gameplay can be enjoyable so much of the game feels unfinished or makes you not want to play it. Many of the menus are unintuitive to navigate, the AI issues when playing solo can force you to have to restart dungeons, the loot can feel unrewarding frequently, and the dungeon design in general doesn’t feel that appealing. I also ran into crashes and issues with the frame rate dropping which further made me not like the game. These issues will hopefully be patched but for now they are an annoyance. Visually the game looks really good with it using a hand-drawn art style and going for a dark, gritty atmosphere. It pretty much nails that and there is some pretty good monster design within it.

Blightbound has flashes of fun within it but could’ve used more time in early access before launching in full. When I got to play with two actual other people online, I quite enjoyed taking down the enemies and bosses in these dungeons, at least for a time. The game has a great look to it but so much more can be done to improve it. It needs better bot AI, better loot that encourages you to want to keep playing, more compelling dungeons, and better optimization. For right now I would be hesitant to recommend it to those looking for a good dungeon crawler as there are many other better options available out there.

*Blightbound is available now on PlayStation 4, Xbox One, and PC. PlayStation 4 version reviewed. Review copy provided by the publisher for this review.