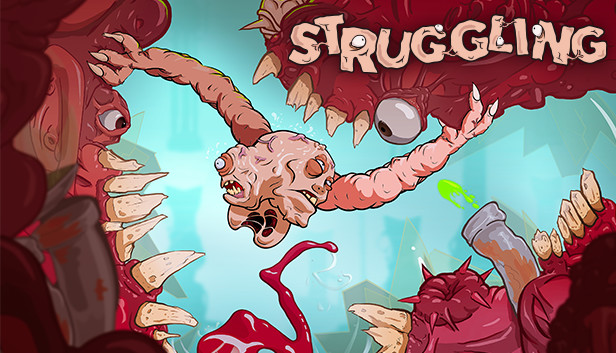 Publisher Frontier Foundry and developer Chasing Rats Games have announced that their physics-based co-op platformer Struggling will be launching on PlayStation 4 and Xbox One on September 8.

The game is currently available on Nintendo Switch and PC. The game has two players controlling the arms of a blobby hero named Troy and trying to solve all kinds of levels. Check out the new trailer for it below.

Struggling is a physics-based co-op platformer with a twisted spin on teamwork. Control the arms of a squishy abomination and guide it through a deranged world where anything goes. Outrun ravenous rats, joyride a dirt bike, and vault over pools of unmentionable waste. One thing’s certain: you will struggle.

Two Hideous Heads are Better Than One – Inventive co-op will test the firmest of friendships. Grab a partner and work together by controlling one arm each. When even walking takes a combined effort, communication is key to keeping your cool.

Crawl, Swing, Clamber, and Slide to Victory – Manipulate each arm independently and latch onto literally anything you see, from suspicious levers to dangling eyeballs. Triumph over physics-based challenges, or get your arms ripped off in the process (don’t worry, they grow back).

Weird Levels, Even Weirder Objectives – Your pilgrimage encompasses dodgy labs, perilous canyons, and even a psychedelic fever dream. Plug waste-spewing pipes with your flailing limbs, launch yourself across yawning chasms, and discover complex machinery you have no business operating.

Gleefully Depraved Visuals – Grotesque graphics drawn by appalling human hands. From moist cavities to glistening guts, nothing is off limits. As the mistakes mount, so does the bodily damage, with ugly mishaps leaving unsightly marks on your face.

An Ever-Mutating Character – Unlock a range of game-changing powers as you go. These include time slowing to dodge fast-moving hazards, detachable arms you can make crawl around creepily, and the ability to graft your appendage onto the environment. Solve diverse puzzles using your disastrous DNA.