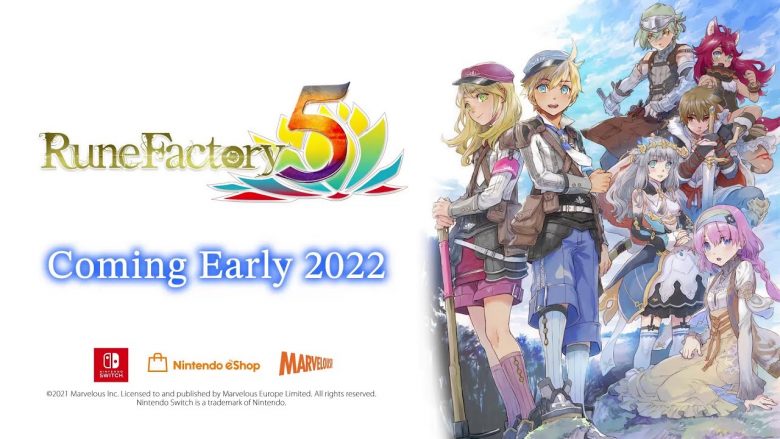 Marvelous Europe just announced that Rune Factory 5 will launch for Nintendo Switch on 25th March 2022 within Europe and Australia. They made a brand new English announcement trailer to drop this info and also made it a big point that the Western release will allow for same-sex marriage:

While this is obviously great news for western fans who’ve been asking for this feature for the past couple of years, and I’m sure many LGBTQ community members and supporters will celebrate the news, I do hope they’ll one day consider this a standard for all their releases across all regions.

It’s a good first step, and it shows that Marvelous is listening to their fans when they’re putting in the localisation efforts. After all, it took until Rune Factory 4 to have the playable character be female, while statistics show that the game has always had a large female player base.

In Rune Factory 5 players will choose between male and female protagonists, Ares and Alice, and embark on an adventure from the town of Rigbarth in a quest to recover their lost memories and restore peace within the town, as part of the peacekeeping force known as Seed. As part of this adventure, players will be able to explore vast dungeons, defeat vicious monsters, nurture nearby farmland and develop relationships with various characters to find true peace and happiness within the town of Rigbarth.

Newcomers and fans alike will be able to experience refined action-RPG combat, with eight different weapons, including Dual Blades, Spear and Axe, available to master, alongside iconic features such as farm management, town quests and festivals. Whether you decide to fight off monsters around town, aid the townspeople with their troubles, or embrace your green thumb dreams, Rune Factory 5 will offer an adventure like no other when it launches on Nintendo Switch.

About Rune Factory 5
Set off on a grand adventure in a fantasy world with the latest entry in the Rune Factory simulation RPG series. After losing their memory, the hero lands in a small town blessed by nature. There, they are recruited into a band of peacekeeping rangers, and their new life begins. In addition to their normal duties, the hero can farm the land, cast a line into the nearby river, and so much more! Team up with townsfolk to battle monsters and unleash powerful combination attacks—just one of the features new to the series. The stage is set, and the curtain rises on an exciting new adventure in Rune Factory 5!

● Tame monsters or team up with townsfolk to explore a massive world
● Defend the frontier and support your community as a peacekeeping ranger
● Unleash uniquely powerful combo attacks with your teammates
● Cultivate crops in the fields
● Find friendship, love, and family with a colourful cast of characters